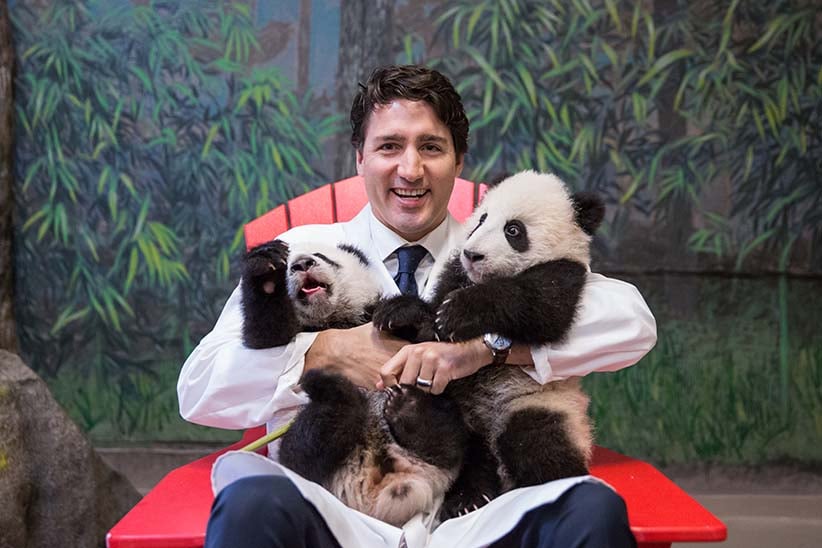 Statistics Canada said GDP shrank by 1.6 per cent in the second quarter, due mostly to the Alberta wildfires that temporarily shuttered oil sands production. But scratch beneath the surface and a more encouraging picture emerges. The economy resumed its upward trajectory in June and, more important, new data show Canada’s trade deficit narrowed in July as exports enjoyed their biggest increase of the year—up 3.4 per cent to $42.7 billion. It may not always look like it, but Canada’s slow, steady economic recovery continues.

Prime Minister Justin Trudeau turned down a plea by Calgary Mayor Naheed Nenshi to help pay for an upcoming panda exhibit at the Calgary Zoo. While Trudeau was right to swat away Nenshi’s sappy calls for subsidy—“As a fellow lover of cute, cuddly panda cubs,” began the mayor’s letter, referring to a cloying photo earlier this year of Trudeau at the Toronto Zoo—he should also have resisted the urge to suggest Calgary apply economic diversification programs instead. We all love pandas, and are beyond thrilled that, as of this week, they are no longer an endangered species, but they shouldn’t be a drain on the public purse.

The EU’s competition commissioner has ordered Apple to repay US$14.5 billion in back taxes, plus interest, following a three-year investigation into a sweetheart deal the iPhone maker cut with Ireland back in the 1990s. Both Apple and Ireland plan to appeal, and they may have a case since Apple didn’t technically break any laws. Still, the ruling is a badly needed shot across the bow for dozens of multinational firms that seemingly spend as much time designing dubious offshore tax structures as they do creating nifty products and services. A better approach: strive for a more level playing field and let consumers decide who wins and loses.

With just a few weeks left in its mission, the European Space Agency’s Rosetta probe has finally located its missing Philae lander—the first probe to land on a comet, back in 2014. Philae only transmitted data for three days before its battery went dead, the result of a bouncy landing that left it unable to recharge using the Sun’s rays. Now we know why: Philae’s spindly legs were spotted sticking out of a giant crack on the comet’s surface.

Conservative leadership hopeful Kellie Leitch, who once promoted a “barbaric cultural practices” snitch line, is now suggesting immigrants be screened for “anti-Canadian values.” It’s another bad idea. For one thing, it’s impossible to crawl inside the minds of would-be Canadians. For another, Leitch’s divisive politics are arguably as un-Canadian as anything a newcomer might bring with them. Good thing the Tories have a tool to screen out such troubling ideas and the candidates who trade in them—next year’s leadership convention. Let’s hope they use it.

6. Photos are not enough

It’s been a year since the horrible photo of three-year-old Alan Kurdi lying face down on a Turkish beach hammered home the staggering human cost of the Syrian war. But, unfortunately, the world didn’t prove nearly as adept at responding to the unfolding humanitarian nightmare as it was in identifying its enduring image. Sure, a few countries, Canada included, stepped up their intake of refugees, but it wasn’t nearly enough to save more than 3,000 asylum seekers from perishing on similar journeys during the first seven months of this year—the same number who died in all of 2015.

The private sector’s promise to make human space travel cheaper and more common suffered a big blow when SpaceX’s Falcon 9 rocket exploded on the launch pad during a routine pre-flight test. SpaceX CEO Elon Musk downplayed concerns by suggesting, on Twitter, the explosion was really a “fast fire” and that the firm’s manned DragonX capsule would have survived. Perhaps. But the fiery accident was catastrophic enough to shred a satellite Facebook planned to use to beam Internet connectivity to Africa—not to mention the nerves of future astronauts.

8. Grill at your own risk

Doctors are urging Canadians not to clean their outdoor grills with wire BBQ brushes because errant wires can stick to food and become lodged deep in the throat or digestive tract, where they are difficult to surgically remove. A six-year-old Ontario boy was recently sent to hospital and as many as 1,700 BBQ-brush-related emergency room visits were recorded in the U.S. over the past 14 years. It’s been a tough summer: first we learn dentists have been lying to us about the benefits of flossing and now we discover our backyard burgers are trying to kill us.