Talking points: The Jays get hot, Russian relations are not 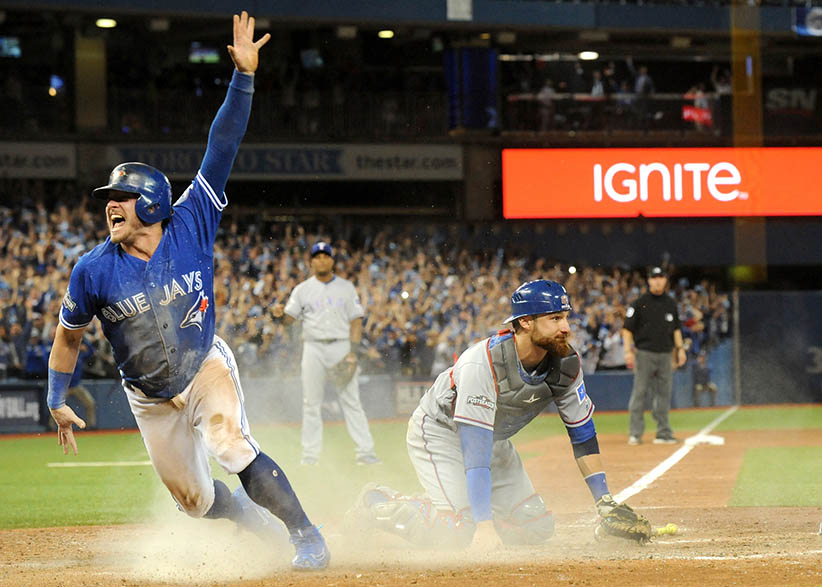 Islamic State is pumping out far less propaganda these days. The group’s posts and videos, designed to recruit foreign fighters to their “caliphate,” dropped off dramatically over the past year according to a new U.S. study, from 700 a month to under 200. Perhaps that’s because the job of producing them doesn’t offer much security. This week, the terrorist organization confirmed that its latest “minister of information,” Abu Mohammed al-Furqan, is dead. (The Pentagon trumpeted his demise last month, saying he was killed in an airstrike near Raqqa that targeted senior leaders.) Meanwhile, Islamic State losses on the battlefield continue, with rebel groups now in control of 14 villages around the northern Syrian stronghold of Dabiq, and poised for more gains. All before Donald Trump can launch his “sneak attack” on Mosul.

Australia’s opposition parties are set to derail a government plan to hold a referendum on whether or not to legalize same-sex marriages. The purpose of the non-binding vote was never clear since polls suggest a solid majority of Aussies support following the lead of pretty much every other Western democracy and allowing everyone to wed. Prime Minister Malcolm Turnbull also says he’s in favour of the change. The opposition thinks the plebiscite is a delay tactic and fears that it might prove divisive. They’re right. Putting minority rights to a majority vote is simply a bad idea. Let love rule.

The Toronto Blue Jays are on a roll. After a dramatic extra-inning wild-card win over Baltimore, they swept the hated Texas Rangers in the division series and now move on to face Cleveland for the American League championship. It could be close—the Ohioans took the season series four games to three. But it will be exciting. Let’s. Play. Ball.

It’s been a banner year for giant gourds. First, Todd Kline, a retired carpenter from Quebec, shattered the Canadian record with a pumpkin that tipped the scales at 851 kg during the 30th annual Port Elgin Pumpkinfest. And now, Richard Wallace of Rhode Island has squashed the North American mark with 1,026-kg behemoth—a fruit roughly the weight of a small car. (Wallace’s son Ron had set the previous record of 1,011.5 kg in 2015.) We have no idea how many pies they could fill. But we do worry that Canada is falling behind. Time for a royal commission.

Hurricane Matthew’s direct hit on Haiti left at least 1,000 people dead, tens of thousands more homeless and 1.4 million in need of emergency assistance. But there is more hardship to come. Officials worry that the flooding, destruction and displacement will worsen the cholera epidemic that has been raging since 2010’s earthquake. Crops and livestock have also been destroyed—a stiff blow to a country where half of the 10 million population were already classified as “chronically undernourished.” The world must help.

Vladimir Putin has cancelled a trip to Paris after the French government accused Russia and Syria of committing war crimes in Aleppo, and mused about asking the International Criminal Court to launch a probe. Russia seems more isolated by the day, with the Americans withdrawing from Syria peace talks and openly accusing the Putin regime of trying to influence the upcoming election by hacking Democratic Party emails. Former Soviet leader Mikhail Gorbachev warns that the tensions have reached a “dangerous point” after the Kremlin suspended a series of nuclear pacts, including a deal to cut stocks of weapons-grade plutonium. “I don’t want to give any concrete prescriptions but I do want to say that this needs to stop. We need to renew dialogue,” the 85-year-old told a state news agency. Wise words from a peacemaker.

The American Civil Liberties Union says that police departments across the nation have been mining social-media data to spy on law-abiding protesters. Dozens of forces have subscribed to Geofeedia, a site that allows users to monitor posts by geographic location for a $30,000-a-year fee. Twitter, Instagram and Facebook have all stopped sharing information with the Chicago-based start-up since the ACLU complained. But the lesson is clear: Big Brother “likes” all your selfies.

A new report from Save the Children has put the spotlight on child brides, finding that every seven seconds, a girl under the age of 15 is forced to marry. Poverty and humanitarian crises drive the practice, which leads to a “cycle of disadvantage” that touches every aspect—health, education, employment—of a woman’s life. UNICEF estimates that the number of women married in childhood will grow from the current 700 million to 950 million by 2030. That’s not progress.