Terror, agony and a new beginning in fire-scarred B.C.

Carmen Jacobsen had walled herself off from the world after losing her best friend in a horrific crime. The fire—and the heroism of her neighbours—brought her back. 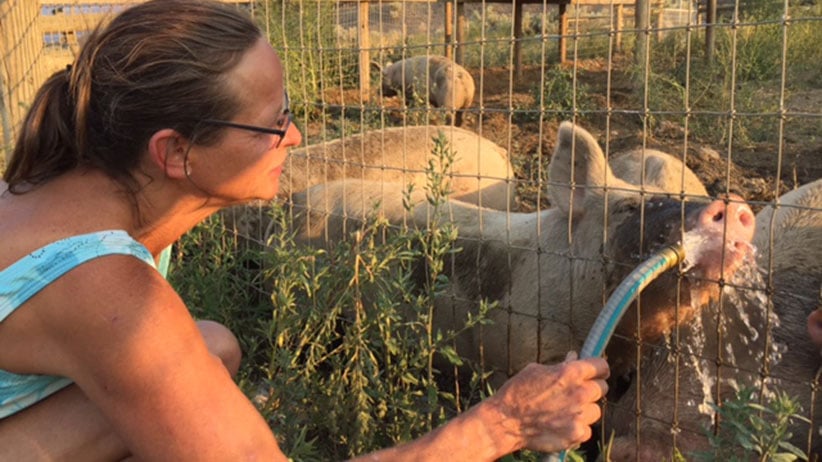 This is Carmen Jacobsen’s sanctuary. The way she sees it, it chose her as much as she chose it. She found the 12-acre farm near Ashcroft, high above the Thompson River in B.C.’s bone-dry Interior a decade ago, while out driving alone, searching for a way to recover. A few years earlier, her friend, Tracey Wolfe, a 28-year-old Yukoner who loved driving motorcycles—fast, just like Carmen—was murdered in front of her.

The quiet and peace she found on the acreage at the base of Elephant Mountain acted like a salve: it saved her. Maybe that’s why she fought so hard to return the favour when wildfires threatened it on July 7.

Tracey and Carmen had been working together at the Harley Davidson shop in Prince George, B.C.’s de facto northern capital, when Tracey’s marriage fell apart. She moved in with Carmen; but even there, she was afraid of her ex, Gordon Wolfe. She went to police, to find out how to take out a restraining order against him. Ten days later, Gordon found her at the Harley dealership.

Gordon shot Tracey in the parking lot, then calmly followed her firing shots at his badly injured ex-wife as she tried to get away from him. Once inside, he stood on her back and shot her point blank, through the back of her head. Then Gordon turned the gun on a friend of theirs, Mark Guillet, a 31-year-old Harley mechanic, shooting him in the stomach. The day before, Gordon reportedly learned Tracey and Mark had begun a relationship. But having fired on Guillet, Gordon ran out of bullets, and that’s when Carmen sprang to life.

Gordon twirled the heavy .45-calibre revolver on his finger, caught the barrel in his palm, and was trying to beat Mark to death with the stock when Carmen jumped him, wrestling the gun from his hand. Gordon had a smile on his face as he was led away by police.

At trial, three years later, the then 36-year-old was sentenced to 25 years to life for first-degree murder and attempted murder, thanks partly to Carmen’s testimony. To this day, she remains terrified of him, terrified he may be released 10 years from now, and come hunt her down.

In the aftermath of the nightmare, the grief, the pain, left Carmen scared of loud noises, of crowds. A sudden bang could drain all colour from her face, leaving her sweating and terrified. She just wanted to be alone, far from the world. Tracy, like always, was on her mind the day in 2005 she spotted a “For Sale” sign on the acreage just outside Ashcroft. “This is it,” Carmen thought. Then and there, she made up her mind to buy it.

And it was there Carmen slowly started to recover. To get over her fear of guns, she taught herself to shoot, earned a gun licence and learned to hunt. She loved the long, hard days in the Interior, living off the land, eating what she hunted and caring for her animals—a few pigs and some cows.

She was across the Thompson in Ashcroft on July 7, when she first heard of the wildfire, just before noon. By the time she got home, the flames were licking at the top of Elephant Mountain, starting to move downhill towards her house. She started running sprinklers all over the property and had two hoses in her hands when the police came and ordered her out: “No,” the officer shouted, as she begged for a few more minutes to defend it—“Go now!”

Carmen left her property long enough to help a friend in nearby Cache Creek pack up her house and animals, but soon found a way through the police barricades, back home. None of her neighbours—with the exception of an RCMP officer, who was on duty around the clock through the fire—left either. They banded together to save what they could—livestock, houses, barns. They’re “heroes,” she says—“each one of them.” She cannot speak of them, nor the sacrifices they made, without breaking down. “They saved me. I’ll do whatever I can to try to pay them back.”

Those with heavy equipment jumped on tractors and backhoes to dig fire cuts to help protect homes and barns. A group, including Carmen, moved from farm to farm to try to load animals on trailers. At one nearby property, they managed to save the horses, but lost the pigs. At the next, they managed to get most of the horses out, losing only a few, as well as some of the cows.

At one point, a stranger racing from the fire stopped at Carmen’s house, dropping off two cows and eight pigs. The woman was about to drive off before it occurred to Carmen to ask for her phone number. She didn’t even know her name.

Three times, flames came within 15 metres of Carmen’s home; each time, firefighters managed to beat them back. Four times, Carmen managed to put out fires on her property and the one adjacent hers caused by “ash devils”—tornadoes of smoke and hot ash that shear off from wildfires in strong winds. In the end, more than half Carmen’s property burned, including a storage container and a $20,000 irrigation system, but her home was saved. Her next-door neighbour, the police officer, wasn’t so lucky. His burned to the ground in eight minutes. 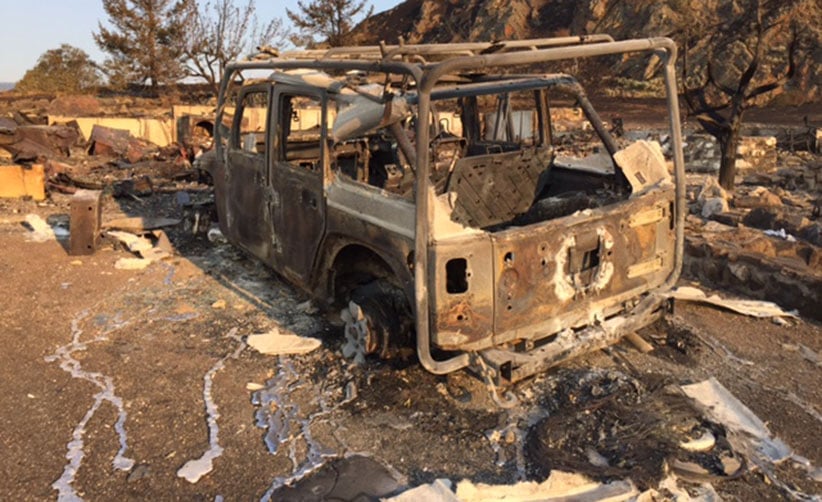 The scorched Jeep of an RCMP officer who lived next door to Jacobsen. (Nancy Macdonald)

“Cache Creek was just starting to recover from the flood when the fires came,” Carmen adds. Indeed, flash flooding on May 5 caused widespread damage and the fatalities of two area men, including Cache Creek fire chief, Clayton Cassidy, 59.
“It’s just been one thing after another,” says Cache Creek resident Pete Bennett, who recently retired from the provincial highways department, and returned home Tuesday afternoon, when Cache Creek’s evacuation order was lifted. “The whole year’s been a bloody nightmare.”

Pete and his wife, Donna, whom he met 20 years ago when she was working as a highway construction flagger, watched from their sunroom on July 7 as “horrific” winds sent the wildfire rushing towards town in two directions, the smoke so black it blocked the sun. “The whole town’s going to burn up,” Donna thought as they rushed from the town. Pete has taken to calling “Catastrophe Creek.”

Donna was among hundreds of mourners who jammed Cache Creek Arena on June 3 for Cassidy’s memorial service. The week previous, his body was finally found in the creek, not far from where he’d gone missing in May. Cassidy had been standing on a small bridge, inspecting the rising waters when rushing water tore it away, sweeping him into the frigid creek. His pickup was found the next morning, running with the door open.

Tom Moe, Cache Creek’s incoming fire chief says he thought of Cassidy every single day they fought the wildfire: the “little things he’d teach us,” the kind-hearted manner in which Cassidy led them. On Tuesday afternoon, Moe stood outside the fire hall—which was among those municipal buildings flooded in May—waving to Cache Creek residents as they trickled in, slowly filling the streets, a deeply emotional experience for Moe and his 25-member volunteer fire squad. Still, it was only when speaking of their fallen chief that Moe’s eyes began to fill.

The back-to-back tragedies seem to have changed everyone in Cache Creek and Ashcroft, in ways big and small.
Carmen isn’t normally much of a talker. After moving to the acreage, she put up a fence and kept the gate shut. Losing Tracy left her closed off from the world around her. “It’s why I’m so private,” she admits, her voice dropping to a whisper. She refuses to dwell on the past, but acknowledges it is a part of who she is today. Recently, her partner, a farmer from Ashcroft, suffered a brain aneurysm and a stroke, leaving him paralyzed on the right side. 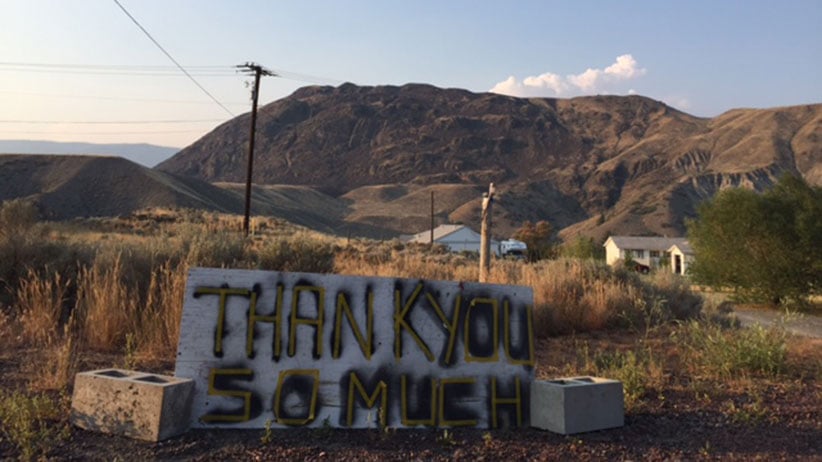 Jacobsen put this sign up at the end of her driveway in Cache Creek, B.C. (Nancy Macdoland)

“Life is cruel, but God only gives you what you can handle,” she says. “We’re alive and breathing,” she says, looking out at her property, burned and charred, stained red in patches from fire retardant, the air reeking of smoke and chemicals. From a ridge above the river, you can see the blackened remains of Boston Flats, a trailer park that burned to the ground. Carmen hasn’t slept more than an hour at a time in 10 days.

She calls the loaner pigs her “therapy.” When she has a bad moment she goes out and watches them play in her wallow, and talks to them. The fat, muddy hogs adore her, and grunt and squeal loudly and crowd the fence whenever they see her coming.

“I’ve got angels above and all around me,” she says in tribute to the selflessness of her neighbours. “We don’t talk very often. We don’t need to. We might be miles apart but we’re all connected. When something needs to be done, we do it.” But the fire, she admits, “brought us all together.”

On Tuesday, Carmen spray-painted a giant sign just off her driveway: “THANK YOU SO MUCH,” it reads, a nod to her neighbours and to firefighters. She has spoken to her neighbour Scott on the phone at least every day since the fires began—that’s more than in her 10 years here, she figures. She’s even taken to leaving her fence open. “Sorry,” Scott told her the other day—“you’re not going to be my silent neighbour anymore.”