That Trudeau touch: The line from palming babies to shoving MPs

In one day, Justin Trudeau's physical prowess went from being a national pride to a sign of a sinister, dark side 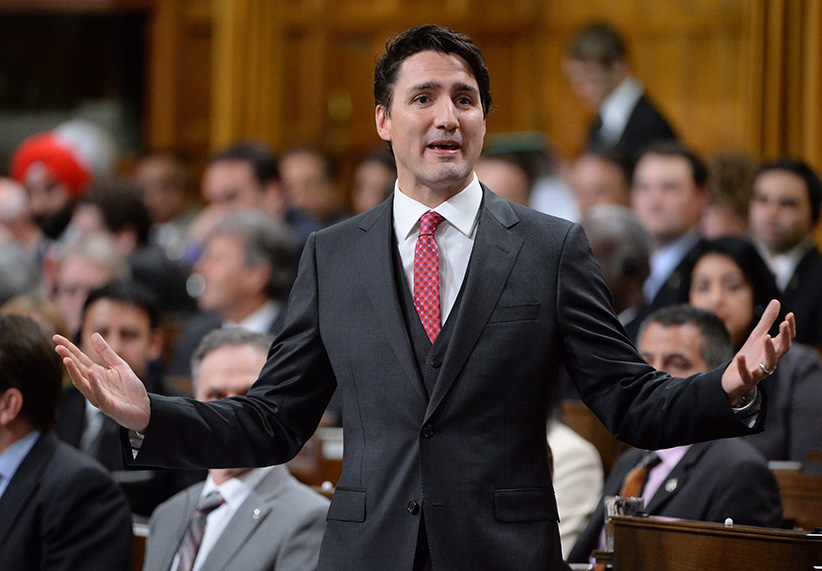 Prime Minister Justin Trudeau in the House of Commons on Wednesday, May 18, 2016. (Adrian Wyld/CP)

The overheated response to Justin Trudeau’s behaviour in the House of Commons this week would seem to reflect some sort of collective shock that the soulful, sensitive matinee idol the nation thought it had married somehow morphed into the Incredible Hulk—or worse. But #elbowgate didn’t mark any sort of new Jekyll-Hyde transformation or even the reveal of a Trudeau dark side. The behaviour is just one more example of the PM’s penchant for highly theatrical flourishes that showcase his impressive physicality: palming a baby high in the air, busting a challenging yoga pose in Liberal caucus, performing a one-armed plank in a video. But if you elect a leader for his teen-idol charm, you shouldn’t be surprised if he occasionally acts like a teen idol.

What happened? people keep asking. This is what likely went on: The sight of Conservative whip Gord Brown being blocked by NDP MPs, thus slowing a vote, summoned Trudeau’s impatience, sure, but also an almost Pavlovian response, a trigger for another big gesture of the kind that underlines his political currency and popularity.

This is a politician, after all, whose leadership credibility is rooted in a surprise victory in a headline-making 2012 boxing match. As Canada’s “hot” PM, Trudeau’s prowess has become a source of national pride as well as a metaphor of sorts for his positive “sunny ways” energy, personal discipline and self-control.

That imagery took a beating this week. Trudeau appeared to be playing some sort of role, though what that was wasn’t clear: Dad? The school teacher or bouncer he once was? Big man on campus? Certainly it didn’t look like an act of rage: the Liberal leader patted Brown on his shoulder as he guided him to his seat, indicating “mission accomplished.” Cue the applause. The Liberal leader failed to immediately notice that he’d elbowed NDP MP Ruth Ellen Brosseau in the process, which given the current female:male ratio was a 26 per cent chance. When he did, he immediately went to apologize. What’s concerning here is less that Trudeau has an anger problem—let alone a woman-abusing problem—than that he totally misread both the context and his audience. He wasn’t among the adoring masses ready to be charmed by a theatrical flourish, as imperious as it was; he was on the job in the House of Commons.

It was a particularly blundering backfire on the very day his government had been under fire for procedural strong-arming. Anyone shocked by Trudeau’s actions, however, hasn’t been paying attention. True, he is a man supremely aware of optics. But he was elected to a majority despite prior parliamentary behaviour, not because of it. He’s been known to swear before his alleged outburst on Wednesday (in 2011 he referred to then-Conservative MP Peter Kent as a “piece of s–t), and was accused of sticking out his tongue earlier this year at Conservative MPs in Parliament. Even his public apology Thursday didn’t seem to quite grasp the crucial leadership-by-example role a prime minister plays in parliamentary democracies: “The way that members behave in this House is important,” he said.

Trudeau’s most winning performances, of course, have taken place outside the House, on a far bigger stage where other actors don’t get in his way. As then-Opposition leader Tom Mulcair grilled Stephen Harper’s government, Trudeau travelled the nation where he was filmed BBQing with the Canadian middle class and mingled at a “Justin Unplugged” women-only Toronto fundraiser in 2013 that invited participants to “(really) get to know the next prime minister” with a wink and a nod. His absences did not go unnoticed: in the Harper majority years, Trudeau attended only 64 per cent of votes; since the November election, he’s been there for 75 per cent, a record better than Harper’s, but not stellar.

Proclaiming Wednesday’s behaviour as marking the end of the honeymoon, however, might be premature. As the dust settles, it’s Brosseau who’s getting heat for being in the wrong place at the wrong time and overreacting by leaving the chambers; more rightly, her party has been called out for exploiting the situation ad absurdum. Meanwhile, a nation and media remains disproportionately obsessed by Justin Trudeau’s physical actions—which suggests that, in fact, very little has changed.