The Delta variant is 'moving the goalposts' for Canada's vaccination targets

Vaxx Populi: Outbreaks at a Toronto hospital and in Yukon have been linked to more infectious variants; data shows vaccines are very effective at preventing hospitalization among those who contract Delta 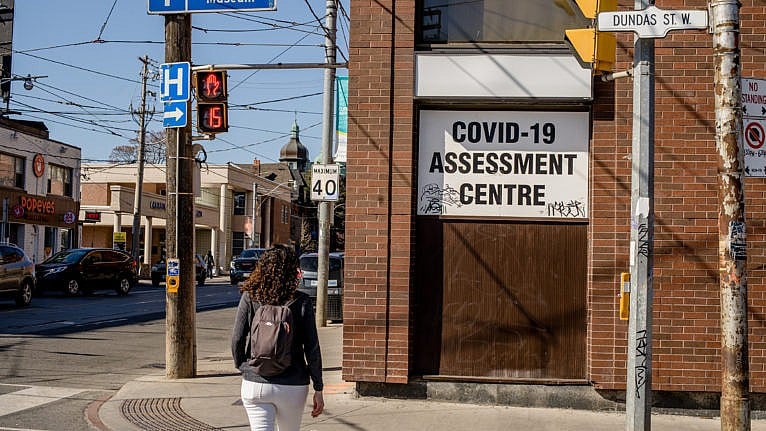 Woman walks across the street, toward the COVID-19 assessment centre at Toronto Western Hospital. (Photo by Shawn Goldberg/SOPA Images/LightRocket via Getty Images)

The public’s crash course in epidemiology and vaccine efficacy shows no sign of ending, more than 15 months into this pandemic. Now, even as more Canadians are fully vaccinated and provinces are lifting public health restrictions, there is a growing realization that outbreaks will occur for the foreseeable future. In particular, the Delta variant is “unfortunately reshuffling the deck for us,” says Dr. David Fisman, an epidemiologist at the University of Toronto.

There are 92 active cases of COVID-19 in Yukon, representing nearly half of the territory’s cumulative tally since the pandemic began. “COVID-19 is now widespread throughout Yukon, primarily affecting unvaccinated people and is now present in most Yukon communities,” the government stated in a press release on Monday. “We expect to see many more cases over the coming weeks, especially in our unvaccinated population,” said Dr. Brendan Hanley, Yukon’s chief medical officer of health. At least 35 cases have been identified as Gamma (P.1).

What makes this outbreak a reality check for the rest of the country is that Yukon has the highest vaccination rates in Canada. Sixty-one per cent of Yukon’s entire population is fully vaccinated, with 71.4 per cent having at least one dose. If it were a country, then it could take the No. 1 spot on pretty much any vaccination list in the world (Israel has fully vaccinated 57 per cent of its population with 61 per cent having at least one dose). And yet, the virus was able to spread there.

RELATED: My first dose was Pfizer. Why am I being offered Moderna for the second?

In late April, the Public Health Agency of Canada presented modelling showing that restrictions could start to be eased once 75 per cent of eligible Canadians had one dose of vaccine and 20 per cent were fully vaccinated. Canada reached that threshold on June 19.

Two days later, Health Minister Patty Hajdu focused her attention on a much higher benchmark during a press conference about new vaccination rules for entry into the country: “What we do know is that Canada will be much better protected when we have a much higher rate of full vaccination. The one metric Canadians can watch for is the rate of fully vaccinated Canadians that is at least 75 per cent.”

“More infectious variants are moving the goalposts. The government is just responding to that,” Fisman told Maclean’s. He calculates that the reproduction rate for Delta is well above one in Ontario (meaning each case of Delta spreads that infection to more than one other person). “Seventy-five per cent [of eligible residents] with a single shot would have been fine with pre-Delta variants,” he says. In Britain, where Delta is now the dominant strain of SARS-CoV-2, a preprint study by Public Health England (PHE) into how well the vaccines stood against Delta determined that effectiveness against infection “was notably lower after one dose of vaccine” compared to how well they withstood the older Alpha variant.

RELATED: Fully vaccinated people have gotten the Delta COVID variant. Should we be worried?

The success of Canada’s vaccination program will be measured in the number of hospitalizations and deaths. So far, vaccines have been shown to be remarkably effective against severe COVID-19. Even though Delta is up to 50 per cent more transmissible than older variants, research from Public Health England shows that the vaccines are more than 90 per cent effective against hospitalization for those who contract Delta.

Last week, an outbreak likely linked to Delta was found at Toronto Western Hospital, involving at least four patients and three staff, some of whom had been vaccinated. “I think it’s important for everyone to recognize that none of the individuals who have picked up COVID have had any severe disease,” Dr. Alon Vaisman, an infectious diseases physician at the University Health Network told CP24. “They all have been either asymptomatic or mildly symptomatic as a result of the COVID.” Earlier in June, a majority of the 22 patients and staff in another Delta-linked outbreak at Foothills Medical Centre in Calgary experienced only mild symptoms, though one required treatment in the intensive care unit.

As variants spread, Fisman’s advice is simple: “Get vaccinated. We will likely see a resurgence with Delta, but can blunt the impact with widespread vaccination.”