The high cost of crushing the Catalan independence vote 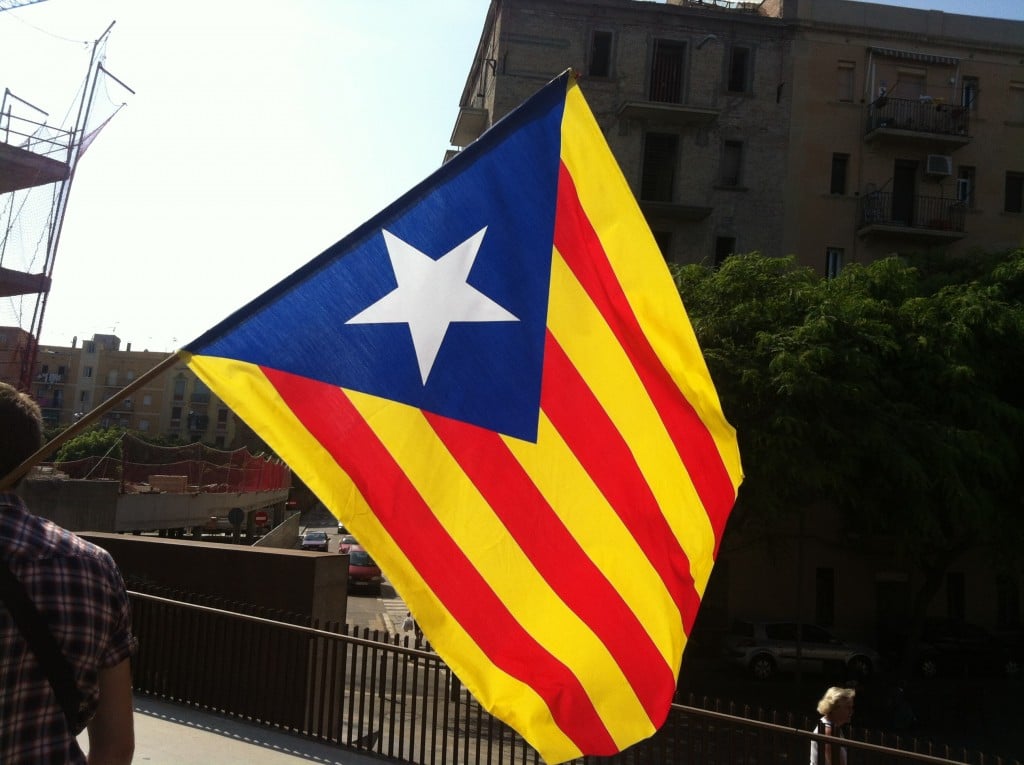 A man holds a flag during a Catalan independence protest on September 11th, 2012. Image by Kippelboy via Wikimedia Commons.

Europe has had a rocky ride with referendums in recent years: think of Greece’s anti-austerity vote in 2015, or the Brexit shock and Italy’s failed constitutional referendum in December 2016. As the UK found with the 2014 Scottish independence vote, even holding a referendum at all can be highly destabilising to the traditional political order and political party systems.

But something different happened in Catalonia on October 1 2017: a referendum that in practice wasn’t a referendum at all. It was considered a referendum by the supporters of Catalan independence, but not their opponents – the Spanish government – who called it “illegal” – for the EU, or any known government in the world. The reported 42.3% turnout and near-90% vote for independence do not carry any meaningful legitimacy. Even for those who did turn out, anything approaching normal voting was prevented by a heavy and at times violent Spanish police presence.

Still, this doesn’t mean the vote isn’t destabilising. The events of October 1 mark a turning point in the ever-growing – but containable – dispute between the government in Madrid, led by the conservative Popular Party, and the pro-independence coalition of parties in Catalonia’s regional government. Since mass pro-independence protests of 2012, the dispute between Madrid and Barcelona has simmered along as a low-intensity political conflict.

The Catalan elections of September 2015 gave an ambiguous result, and the referendum on independence was launched as the mechanism to break the deadlock.

But Madrid refused to accept the legitimacy of any such vote, and promised to block it by all legal means. Even as tensions rose to their highest level yet in September 2017, the Madrid stock market seemed impervious to the apparent turbulence in the weeks leading up to the referendum. This was because nobody seriously believed Spain really was about to lose a fifth of its economy, which is what Catalonian independence would really mean.

Yet still, the independence side made a serious noise, and Madrid was rattled enough to send thousands of police officers to Catalonia with the express intention of stopping the vote.

In the days leading up to the referendum, police confiscated millions of ballot papers, blocked websites related to the referendum, and warned a range of public officials of the danger of breaking the law. The day of the vote itself saw a very heavy police presence, with high drama and tension giving way to outright violence: police forced polling stations to close, charged into crowds of protesters, and even fired rubber bullets.

But for all the Catalan government’s promises, the vote failed to be a true reflection of opinion, and its legitimacy is highly questionable.

The referendum legislation setting October 1 as the date was only formally passed by the Catalan parliament on September 6 2017, barely four weeks before the vote was due. There was no referendum campaign in any real sense. Opponents of independence simply did not campaign, instead boycotting the referendum or simply ignoring it. There was no serious public discussion or debate over the merits of “yes” or “no”, and the pro-independence side was always guaranteed a victory: pro-independence voters are not only the most committed to turning out, but they are the only ones committed to the legitimacy of a referendum. That means there’s a very high correlation between simply turning up to vote and voting “yes”.

Ballot papers were distributed widely in the week leading up to the vote and the Assemblea Nacional Catalana (Catalan National Assembly), the major pro-independence organisation, issued over 1m to its supporters. The Catalan government’s parliamentary spokesman, Jordi Turrull, even called on voters to download their own ballot papers from a government website. These actions gravely undermined the seriousness and credibility of the vote in the days leading up to it.

By the time of the vote itself, the Catalan government seemed to accept that a meaningful referendum was no longer possible, and as the day unfolded, it instead became a show of the civic strength of Catalan independence. The Spanish government, meanwhile, demonstrated that it retains full legal and political control of Catalonia. Crudely speaking, Spain’s prime minister, Mariano Rajoy, got his wish: he promised a referendum would not occur, and his government successfully ensured that what transpired on the day was too incoherent and chaotic to be legitimate.

But this victory comes at a very high price. Rajoy’s government hoped to prevent the vote without police sequestering ballot boxes using violent tactics on ordinary people; instead, the spectacle of police preventing people from voting and firing rubber bullets at protesters, by some reports injuring up to 900, has done deep damage to Spain’s international credibility, and helped poison relations between Catalonia and Madrid even further.

The referendum-that-wasn’t may be over, but the stakes remain high. In the weeks and months to come, the crisis could lead to the fall of the Spanish government, and the Catalonian one at that. The dream of an imminent independent Catalan state has been shattered for now, but those Catalans who support independence are now more alienated from Spain than ever.

This article originally appeared at