Adam Herold was shaped by farm, family and the game he loved

The youngest Humboldt Bronco played at three different levels within four days this spring—he was that committed to hockey. But family meant every bit as much to him. 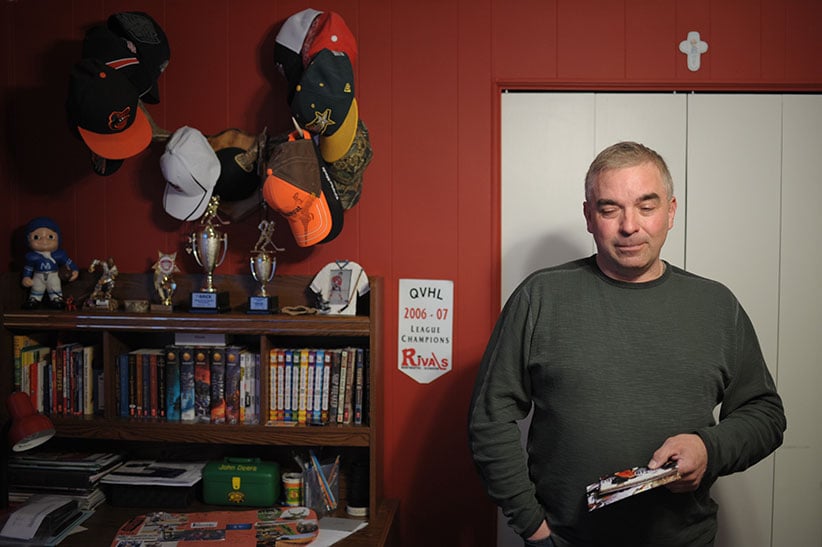 Russell Herold reminisces in his son Adam’s room at their Montmartre area farm. Adam, a recent Humboldt Bronco call-up, was killed when the team bus collided with a semi-trailer outside Nipawin, Sask. (Photograph by Mark Taylor)

There’s a picture of Adam Herold when he first put on skates and stepped on the ice. He’s not yet three years old in the photo, but standing upright, ready to start learning about what it takes to become a Montmartre Ice Dog.

Next to the snapshot is a copy of the Calgary Sun from earlier this year, still in mint condition, with 16-year old Adam on the front of the sports pages, sweaty and shouting as he lifts a massive trophy after leading the Regina Pat Canadians to win the prestigious Mac’s triple-A midget hockey tournament. It was one of the proudest moments in the team’s history. But Adam’s parents are prouder still of a moment captured after that game—one of thousands in the Herold family album of their only son: a beaming Adam is freshly showered and well-dressed after the win, his arms overloaded as he carries his hockey gear, the team’s extra jerseys and its water bottles to the bus. He was their captain.

Raelene and Russell Herold, along with their daughter, Erin, carry album after album into their dining room in Montmartre, Sask. until there’s no more room on the table. His baby photos. Pictures of Adam and Erin ready to ride some mini Ski-Doos or about to jump in the waters of Lake Katepwa. The photo of Adam, then 12, clad entirely in orange and standing next to the first deer he killed. He’s carrying a 6mm Remington, the same rifle that his dad had at that age, and his dad’s dad before that. That photo is framed.

There’s a common theme to all of the photos: he’s smiling.

READ MORE: A 16-year-old phenom, a gifted captain and a beloved coach are among the dead in Humboldt bus crash

As guests trickle into their home at Herold Farms, about 90 km east of Regina one arrival brings in copies of the Regina Leader-Post. The front page story is the Humboldt Broncos bus accident, recounting the moments when 15 people died on the highway to Nipawin, Sask. Adam’s picture is there, too—he was the youngest person to lose his life in the crash. But one picture and that headline can’t possibly capture who he was. Raelene opens up another photo album. 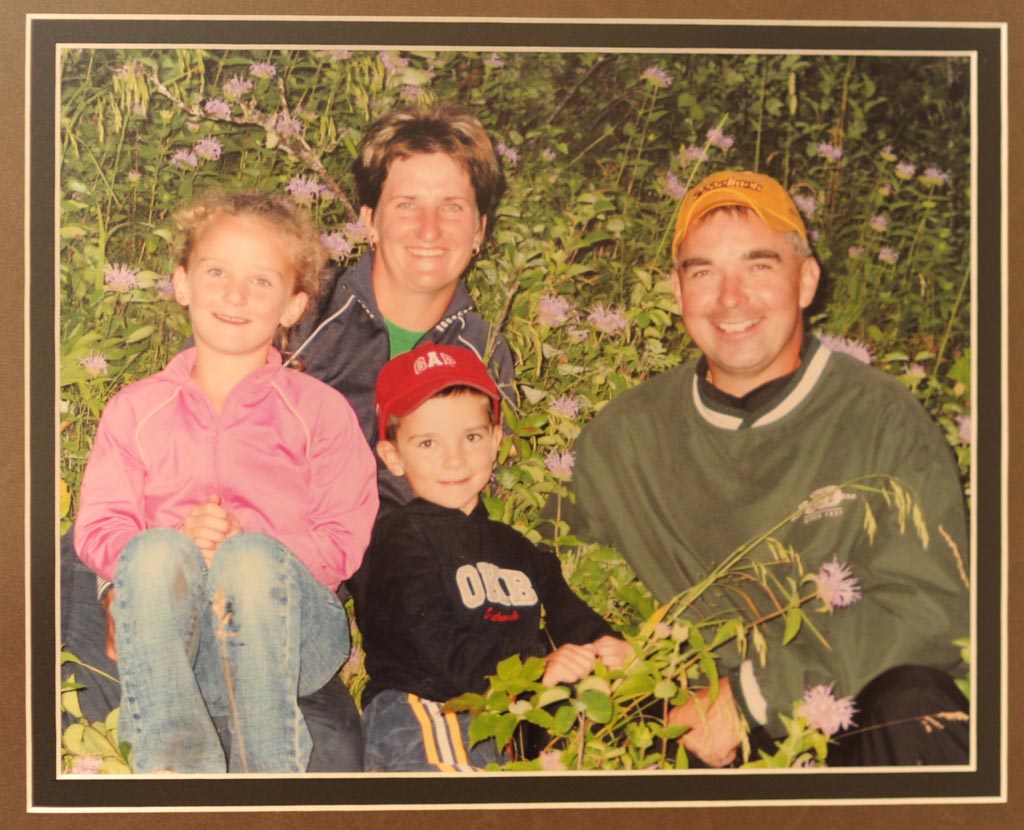 A family photo hangs in the kitchen of the Herold family farm near Montmartre, Sask. From left Erin, Adam, Raelene and Russell Herold. Photograph by Mark Taylor

Adam Herold was born in Regina. The town of Montmartre, population not quite 500, doesn’t have the facilities for delivering a baby, but it had all Adam need for a loving childhood. He could play hockey at the rink. He’d become an altar boy in church, where Raelene played the organ. And he’d ride Ski-Doos or quads around the acres of property, at least when he wasn’t put to work hauling grain or working the combine for the family farm.

“I so desperately wanted a farm picture, but we don’t have that many farm pictures,” Russell says. Erin interjects: “We don’t take pictures when we’re working.”

The youngest of two children, Adam was a “mini-me” of his dad, Russell says. “If I was doing carpentry work, he’d want to be a carpenter.” When the family underwent major home renovations in 2010, eight-year old Adam contributed: he built a birdhouse with the extra supplies lying around.

In his elementary school years, the tree-heavy property was the perfect playground for Erin and Adam’s love of the outdoors.  “I would take my snowmobile and make them a trail and they’d spend hours together driving through the yard,” Russell adds.

And then there were the sports, none more present in the photo albums than hockey. Each image comes with a story. A championship game. A special dinner to celebrate a win. Adam was eight when he got the chance to lead the Regina Pats, the nearby WHL team of players more than twice his age, onto the ice before puck-drop. It’s normally a chance for young kids to get their photos on the blue line while standing with the team for the anthem and nothing more. On this day, Adam roared onto the ice and did a few laps with the squad. After ‘O Canada,’ Adam congregated with the the entire team of 18 and 19 year old by the goalie’s crease for their final pre-game pep talk.

Russell laughs as he remembers asking his boy all those years ago, “What did the players say?” Adam replied: “A lot of bad words.”

By the time Adam turned 10, he had already outgrown playing with the local Montmartre Ice Dogs. It was time for either mom or dad to be chauffeurs, first for for the 100-km trips back and forth to Weyburn, Sask. and then, when Adam was 12, the hour-long drive to practise and play with the Prairie Storm six nights a week.

“It’s a shame you have to go away to play hockey, but locally there aren’t enough kids,” Russell says. On the road, Adam never put in his headphones or dug himself into an iPad to watch a movie. He asked his dad about what he was up to at the farm, or if he saw the new model of snowmobiles that just arrived on the market.

And he kept his bedroom tidy, despite his refusal to throw out relics of his past. In one corner, he kept toy trucks that open up like Transformers, only into books. “Corey Combine’s Big Day” was a favourite read. As he grew older, his book shelf grew into a mixture of fun and serious literature, from “Diary of a Wimpy Kid” to books on the Second World War and the Vietnam War.

An elementary school collage he kept by his desk, half of it devoted to hockey photos, the other half to farming. Adam wrote on it: “Important things to me” and listed hockey, family, friends and school.

Teammates of Adam Herold, who captained the @aaapatcanadians tweeting he died today. He was 16 and brought up to play with the Broncos in the playoffs. Rest In Peace, young man. pic.twitter.com/ZSEVCs0neI

When Adam made the Regina Pat Canadians midget triple-A squad at 15, daily road trips with mom and dad were over. They simply couldn’t keep up with the farm and driving for daily practices. But they made sure the team knew about Adam’s humble farm roots when the Pat Canadians asked for them to supply a photo of Adam for the team’s program book. Raelene remembers asking Adam: “Why don’t you wear your Pat Canadians t-shirt and hat and stand by the combine?” Adam replied: “Mom, don’t be silly.”

So instead, his parents found a picture Adam running the combine, and put it in a full-page advertisement for their farm that ran in the program next to Adam’s profile.

He had farm roots with dreams of the the NHL. But, the student he was, one coach once told him if he didn’t make it to the pros, he could always be a doctor. “He might have come back to farm too,” Russell says. “It’s a family farm and you hope one of your kids will take over the farm one day if they want.”

Adam was serious about hockey though. He started to keep track of his eating and sleeping habits, and found that a solid pre-game nap and drinking loads of water led to him playing better in games.

His focus was always on family, but between hockey, billet families, and his own family, it was tough to keep up with all the engagements. Earlier this year, with the Pat Canadians down in a playoff series two games to none, the team decided to organize a team supper to change the momentum. Every player RSVPed that they could make it, except Adam, their captain. The coach called Russell, wondering why his #10 had yet to reply. 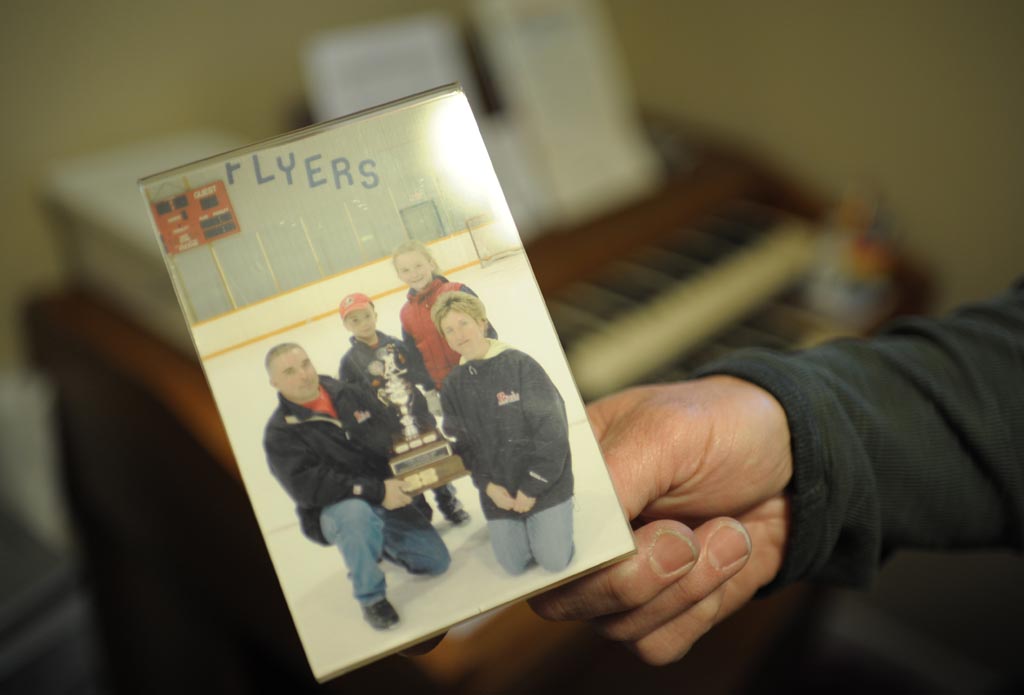 Russell Herold holds up a family photo at his Montmartre farm while reminiscing about his son, Adam, a recent Humboldt Bronco call-up killed when the team bus collided with a semi-trailer outside Nipawin, Sask. Herold said his wife, Raelene, usually plays the organ at funerals in their town, but won't be for Adam's. Photograph by Mark Taylor

It turned out to be the same night he always reserved for dinner and TV with his billet family in Regina along with Erin, who studies at the University of Regina. He couldn’t bear the idea of letting that family down with a no-show.

He was known to teammates as “Rold”—short for Herold—and when the Pat Canadians season ended weeks ago, “Rold” was a coveted commodity. Darcy Haugan, coach of the Humboldt Broncos, called up the Herold family to see if Adam would join them for their playoff run. The Prince Albert Raiders of the WHL, who had drafted him as a bantam, wanted him around too. Adam found a way to play for both.

“He played Wednesday night triple-A midget with the Pat Canadians. He played in Melfort with the Humboldt Broncos on Friday and played with the WHL’s Prince Albert Raiders on Saturday,” Raelene says. That’s three different leagues in four days, which means a lot of registration, says Russell, adding: “And then he went back to play in Humboldt on Tuesday and Wednesday.”

The Wednesday morning of game four for the Humboldt Broncos in their playoff series against the Nipawin Hawks, Raelene and Russell went to Saskatoon to buy Adam a surfboard for Adam, his birthday gift for the following week when he would turn 17. It was almost summer and Adam wanted to become a surfing expert as he trailed behind the family boat at their cabin on Lake Katepwa.

RELATED: What we know about the misidentification of Humboldt players Parker Tobin and Xavier Labelle

Game 4 ended with a triple-overtime heartbreak loss, but Raelene and Russell stuck around until afterwards to see their son, even if it meant they wouldn’t make it home until almost dawn with the three-hour drive to Montmartre. They arrived home at 4 a.m. and put the surfboard on Adam’s bed, where it still lies.

At 5:45pm on Friday, April 6, Russell got a call from a friend in Nipawin, who heard about an accident, asking if the family had spoken with Adam recently. They tried texting and calling, but heard nothing, which wasn’t unusual. Adam kept his phone on silent in the moments leading up to a game. They spoke to their friend in Nipawin again, who told them they should get on the road.

It was the longest 24 hours of their lives—to the hospital in Tisdale, to Regina to tell Adam’s grandmother the tragic news, back home to rest, only to receive a call upon arrival to drive to Saskatoon to identify the body.

The Russell family planned to attend the the vigil in Humboldt on Sunday, but found out late in the day the locals of Montmartre were doing their own for Adam that night. About 600 people, far more than the town’s population, filled the tiny arena.

There were photos of Adam everywhere. At centre ice they set up a net, with Adam’s #10 Montmartre Ice Dog hockey sweater hanging from it.

MORE ABOUT THE SASKATCHEWAN BUS CRASH: