They've flooded land, destroyed property and even claimed lives. Now, scientists are calling for a warning system to alert the public. 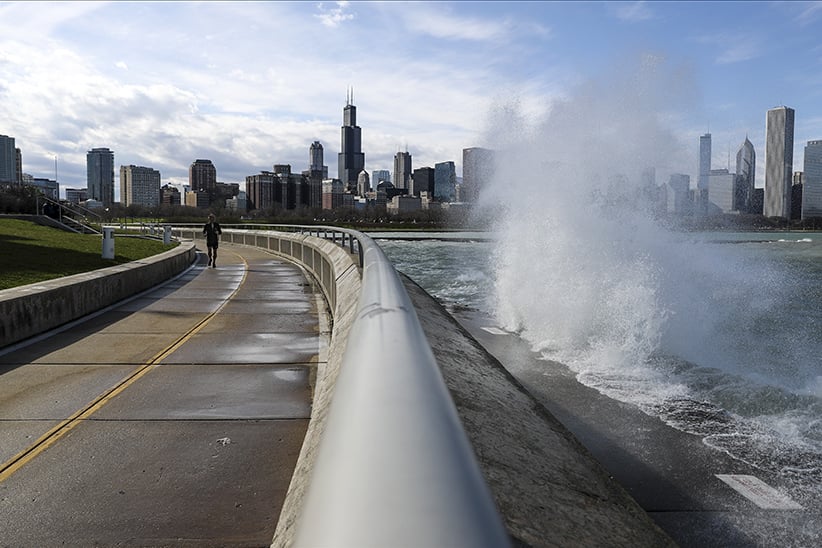 It was a clear spring day in 1854 when the waters of Lake Ontario suddenly and mysteriously receded 500 feet from the shoreline near Niagara-on-the-Lake, and for a few peaceful moments, an expansive beach stretched across the peninsula. But the calm was soon interrupted by a distant, brooding roar from within the lake, followed by a 2.5-metre swell that swept the shore. The torrent uprooted trees, washed out the beach and claimed the lives of two fishermen.

At the time, locals and scientists would have blamed the event on a rogue wave—a large, sudden and seemingly unpredictable surface wave that wreaks havoc on and near the water where it breaks. It was only about 10 years ago that scientists learned that several inexplicable surges like the one at Niagara-on-the-Lake were likely not rogue waves at all, but tsunamis.

According to Eric Anderson, a Michigan-based oceanographer with the National Oceanic and Atmospheric Association (NOAA), there are about 100 tsunamis—a conservative estimate—in the Great Lakes every year. While that may sound like a lot of activity, Anderson assures that many “meteotsunamis,” as they’re called, only reach a few centimetres high and tend to go unnoticed by anyone on the water. Other times, however, the waves can be metres high and fatal. For that reason, Anderson and fellow scientists are meeting in Ann Arbor, Mich., this week to hash out a plan to develop a meteotsunami warning system for the Great Lakes. We called Anderson during a break at the conference to discuss what causes the little-known lake tsunami and how climate change could make them worse.

Q: I’ll admit, I didn’t realize tsunamis happened in the Great Lakes, let alone 100 or more a year. Can you tell me how these meteotsunamis happen and how they’re different from the kind that occur in the ocean?
A: The tsunami we’re more familiar with, technically a seismic tsunami, is typically driven by an earthquake in the ocean, or sometimes a landform that’s eroded from a cliff and falls into the water. Either one of those creates a change in the [ocean floor] which creates a wave, and then propagates from that point towards the coastlines. Meteotsunamis on the other hand are driven not by an earthquake, but by the weather. That’s the meteo part: it’s a meteorologically driven tsunami. In this case, it’s caused by atmospheric disturbances that have big changes in pressure and big changes in wind. Those conditions create a wave on the lakes that then moves much like a [seismic] tsunami wave once it’s created, even though the thing that initiates it is different.

Q: I think a lot of people associate tsunamis with danger or the threat of catastrophe. Do meteotsunamis pose a threat to our safety or environment?
A: They certainly can be dangerous, but for the most part they go undetected. In our research, we’ve gone back and looked at water level records around the Great Lakes over the last 20 years, and we can see that we get about 100 meteotsunamis per year. That may sound like quite a lot, but as far as noticeable ones go, where there was impacts to swimmers or boaters, we’re talking about a meteotsunami more like every five to 10 years.

RELATED: On tsunami forecasts, greenhouse gases from the ocean floor and living under the sea

Q: What kind of conditions influence the severity of the tsunami?
A: A lot of it depends on the specifics of that storm. If you have a thunderstorm coming across the lake, it has to be coming at the right speed, the change in pressure and wind have to be just right, and it also has to sustain long enough on the lake to actually put some of that energy from the air into the water to create this wave. So you get waves of different sizes depending on how well those factors align. Sometimes you have a convective storm that’s just not quite right to create a meteotsunami, but it gets close, so you get a wave that’s maybe only a few centimetres tall and it doesn’t impact anybody. But if that storm was moving slightly faster or moving at slightly a different angle across the lake, it could generate a large meteotsunami. All those factors contribute to the variability between a negligible wave and something that’s disruptive or fatal. In Lake Michigan, there was a tsunami in 2003 where seven swimmers drowned because of it. In Lake Erie in 2012, there was a meteotsunami that generated about seven-foot waves that swamped a marina, capsized boats, and swept swimmers off the beach and into the lake about a half a mile.

Q: How are meteotsunamis different from other big waves we see on lakes during storms?
A: There are other waves in the Great Lakes called seiches. These are caused by prolonged high winds that pile up water on one side of the lake, which then sloshes back and forth—like it would in a bathtub—and can oscillate for between two to 14 hours. The wave is the entire size of the lake or bay. With a meteotsunami, don’t get the sloshing because it doesn’t exist across the whole lake, it’s finite in size and length. An observer may not even recognize it as a wave—it may look more like a sudden rise in water level, or a flooding event. If you’re swimming, you may just notice the water getting deeper. Of course, larger waves can create strong currents or rip tides which can be dangerous. With those conditions, that’s typically when swimmers get swept into the lake.

Q: The water levels in Lake Ontario are at record highs and have been for a couple months. What might be the implications of a meteotsunami in waters that are already so elevated?
A: Certainly water level plays a role. Higher water levels, under a strong meteotsunami wave, could push water deeper inland and cause more flooding, but it’s hard to say. There’s no general rule of thumb that says higher water levels lead to greater impacts across the board. The impact is quite variable depending on specific information along the coastline: what the shoreline looks like; what the bottom slope of the lake is like leading up to that piece of shoreline—that has a bigger impact on both on swimmers and people and property on land. If there’s a harbour, that can lead to more severe impacts in terms of boats capsizing there and marinas flooding.

Q: Does climate change impact the frequency or intensity of meteotsunamis?
A: It can. These waves are really tied to how intense the convective thunderstorm season is. If we’re getting thunderstorms more frequently, you have more meteotsunamis; if those are more intense, you have stronger meteotsunamis, and if that season shifts—if storms are coming later in the year, or if the water temperatures are warmer in the lakes earlier in the year—that can cause meteotsunamis to start to occur when we might be out there swimming in the lakes. So in May, when we’re more likely to get lake tsunamis, there aren’t a lot of people using the lakes. But in July, you have a ton of people out there.

Q: Can you tell me about the meteotsunami warning system you’re developing? Why is it necessary, and how will it work?
A: Historically, these waves have impacted people’s lives and property. There are several notable instances of people drowning, being washed off piers, being caught at the beach swimming, ships being capsizes, cars being pulled into the water. Without a warning system, there’s no chance to avoid that situation, or even to know it’s coming. We can see these convective thunderstorms coming across lake. What we would like to do is have some guidance that can be given to beach-goers or to marinas or shipping captains or boaters to tell them the conditions are right for potentially near-shore conditions, maybe that will come in the form of current or water level changes and here’s some guidance in case you’d like to follow it. Even if the severe events are rare, warning the public will save lives.