As a federal inquiry into missing and murdered Indigenous women and girls ramps up, families who've lost faith in police search for answers themselves 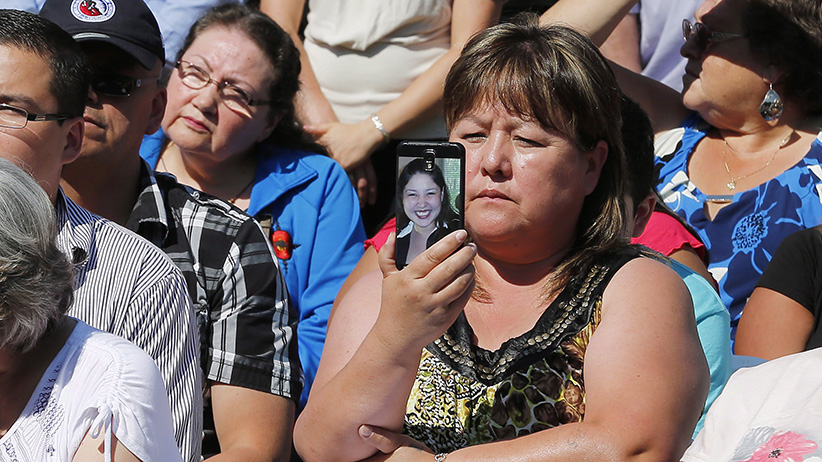 Bernice Catcheway holds a phone with a photo of her daughter Jennifer, who went missing six years ago, at an unveiling ceremony of a monument honouring Manitoba’s missing and murdered women and girls in Winnipeg, Tuesday, August 12, 2014. (John Woods/CP)

When Jennifer Catcheway went missing in 2008, her mom, Bernice, was told by the RCMP officer to whom she’d reported it that she should give it a week—her daughter was probably just out on a bender. But Bernice knew the Mountie was wrong: Her loyal, responsible daughter had told her in a phone conversation that she’d be at her Portage la Prairie, Man., home that night to celebrate her 18th birthday. She never arrived.

Bernice and Wilfred, Jennifer’s father, believe the investigation into their daughter’s disappearance was bungled, particularly in the crucial, early stages. Even weeks after Bernice reported her missing, officers had still not taken statements from family members who had been seen with her. “To put it bluntly,” Wilfred told the CBC, “it’s racism.”

This spring, hearings are slated to begin in the two-year federal inquiry into missing and murdered Indigenous women and girls (MMIW). They will come more than a year after the Liberals announced the inquiry and nine months after it officially launched. Though the real work really began four months ago, when the commissioners were appointed and given their mandate. But families continue to express their concern over one element that will not be part of the inquiry’s agenda: A thorough review of police conduct.

Instead, the feds have directed the five-person commission, led by Marion Buller Bennett, a member of the Mistawasis Cree Nation in Saskatchewan and a longtime provincial court judge in B.C., to find out why hundreds of Indigenous women have disappeared or been murdered in Canada. They have been tasked with making recommendations on how to remove systemic causes of violence, and increase safety for Indigenous women and girls, as well as honouring those who have been killed or gone missing.

The Catcheways are thrilled to finally have a federal ally in the inquiry. But they continue to work on their own, searching marshes, lakes and rivers and have put together a $10,000 reward for information. They’ve excavated three dumps and taken videotaped statements, hoping they might find out what happened.

“We stopped relying on RCMP,” Bernice recently told a Winnipeg MMIW forum. “I never got a call from [the officer] on her case.”