Let the dress rehearsal begin! Jonathon Gatehouse on what's at stake in Toronto 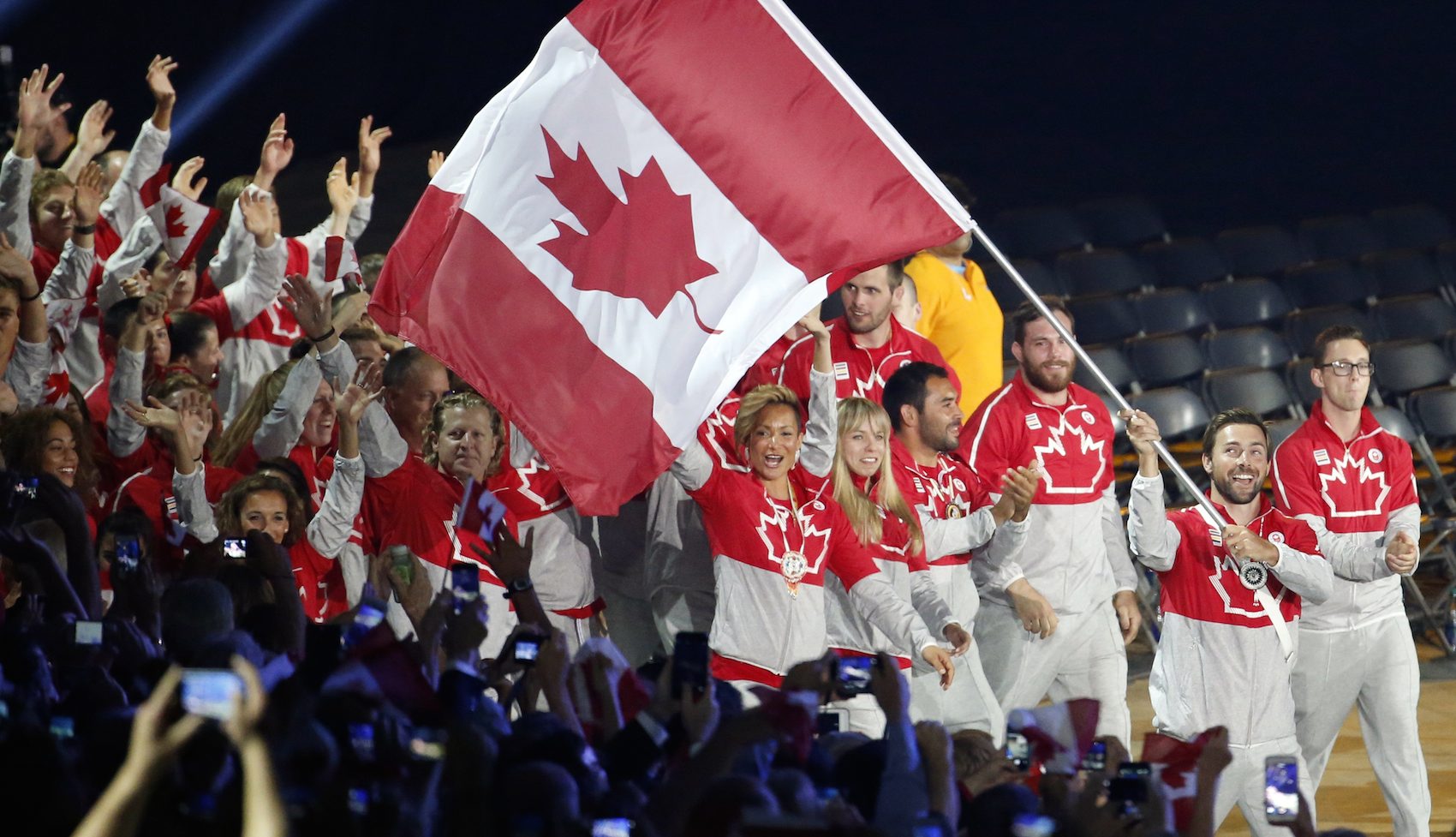 Canada’s Mark Oldershaw carries his nation’s flag during the opening ceremony of the 2015 Pan Am Games in Toronto, Friday, July 10, 2015. (AP Photo/Julio Cortez)

The pre-show was interminable. But things started looking up with the Native dancers. And then Donovan Bailey base-jumped off the CN Tower. In fact, by the time Governor General David Johnston pole vaulted over the flaming tank of piranhas to officially declare the 2015 Pan Am Games open, it seemed almost conceivable that this thing could work.

A day after the New York Times called Toronto apathetic—a label that secretly pleases everyone who lives here, but we can’t be bothered to show it—the kind-of-big show kicked off. And the city didn’t embarrass itself.

Not only was the Cirque de Soleil-designed extravaganza respectable, it was actually rather good. People floating high above the floor in bubbles. Acrobats tumbling over a line of fire. There was a total absence of Nickelback. And  Barenaked Ladies. And Parachute Club. John Tory didn’t give a speech in Jafakin. They even threw in a bit of The Polar Express at the end.

There were 45,000 sealed in to a sweltering Rogers Centre on a beautiful summer night, and they weren’t grumbling. At all. Outside, more than two hours before the curtain went up, scalpers had proliferated. The crowd was excited. There was a buzz.

For more than a year, all Ontarians had heard about is the $2.5-billion cost of these Games and how they were destined to make their lives hell. In recent weeks, there have been daily stories of traffic congestion, HOV lane scofflaws—take a bow Rob Ford—and the rafts of unsold tickets.

But now that the Games are finally here, and the athletes marching around town in their tracksuits, and all those volunteers in those gawd-awful orange shirts, being good-naturedly ineffective, it kind of feels like an Olympics. Okay, there aren’t tanks and sub-machine gun-wielding police on the streets, but it’s almost as warm as Sochi. And all the unfinished construction downtown does bring Athens to mind.

The Pan Am Games isn’t A-list. But it’s an important stepping stone. Medallists in 16 of the sports here automatically punch their ticket for the 2016 Summer Games in Rio. And along with all the raw rookies, and hopefuls, Team Canada’s massive 718-member squad boasts a goodly number of athletes who will end up contending the gold, silver and bronzes that the public actually pays attention to.

Regardless of the sniffy pretensions that maybe Toronto is too big for something this medium-sized, the competitors seem pretty star-struck. At a press conference earlier in the day, Canadian women’s rugby star Magali Harvey raved about the food at the village. “It’s really good, and there’s so much choice!” But what’s really special is that the Quebec City native’s parents are finally going to see her play in person. “This is the first time they get to see me on a field, not a TV or a computer,” she said.

There will be great performances. And lots of medals: 15o of them. Canada wants to finish top-2 on the table. The Americans, who came in first in Guadalajara in 2011, won 237. There’s bowling and roller figure skating. It will be fun.

If that’s really not enough for you, know this. It’s a dress rehearsal for another crack at the Summer Games. Marcel Aubut, the head of the Canadian Olympic Committee has been talking it up to Thomas Bach, the head of the IOC. “I promised that I wouldn’t talk about it. Today is for the athletes,” Aubut said at Canada’s opening press conference. “Ask me later. I’m here for the next 16 days.” Toronto’s a two-time loser in the bid process, failing to secure first the 1996, then the 2008 Games. But the IOC is running out of petro-dictatorships and kleptocracies to showcase. Third time’s a charm.