Before the first 911 call came in, there was an assault between the gunman and a person known to him in Portapique, Nova Scotia RCMP Superintendent Darren Campbell said at a press conference Friday morning

On Friday, April 24, Superintendent Darren Campbell, Support Services Officer, Nova Scotia RCMP spoke to the media in Dartmouth, N.S., with an update on the investigation into the murders that took place over the previous weekend.

Before I begin and provide you with information related to the incidents as they unfolded, I want to first acknowledge those who lost their lives.

Twenty-two innocent people were killed at the hands of a gunman and three people were injured. To call this a tragedy is an understatement. Some of those who lost their lives did so while trying to save others. They are heroes.

I want to express my sincere condolences to all the families.

There are two elements that I would like to address before going through the incidents as they unfolded.

The incidents happened in rural Nova Scotia. Portapique is a community in Colchester County in the central part of the province. This is a small community; about 100 people live there year-round. The homes are set back from the road, some are old, others new, and some are summer residences along the Bay of Fundy. This is a quiet community, there are no sidewalks or streetlights. 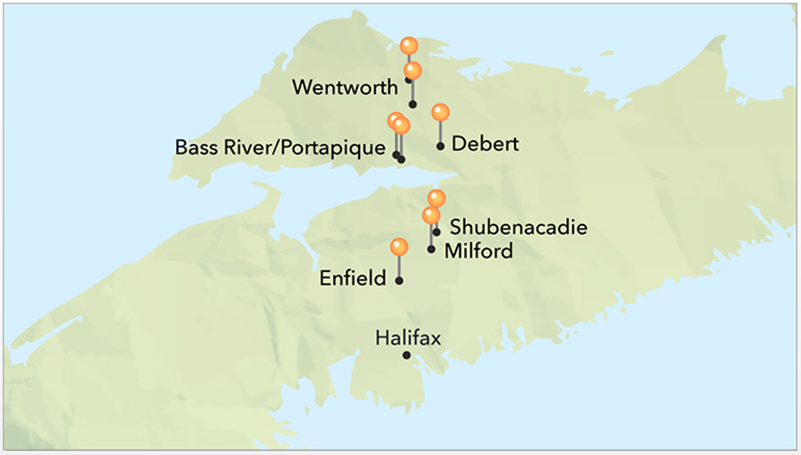 Map of Nova Scotia highlighting the location of Wentworth, Portapique, Debert, Shubenacadie, Milford and Enfield and their proximity to Halifax. (RCMP)

The RCMP implements a Critical Incident Command structure when responding to complaints that may impact public safety. Highly skilled and trained officers come together as a team in order to direct emergency personnel and the multiple specialized policing units deployed when responding to a complaint.

These two elements are important to be aware of as I go through the timeline of the incidents.

RELATED:  Victims of the shooting: ‘They were so appreciated and loved’

The following details I will be sharing with you have been put together because of the benefit of hindsight, of knowing what happened. The police officers responding to the initial 911 call and the subsequent calls did not have the benefit of the knowledge I am about to share with you. The initial complaint was of a shooting.

To help explain the timeline I will be talking about three clusters of incidents. The first cluster was in Portapique on Saturday night. On Sunday, there was a second cluster of incidents in Wentworth, Glenholme, and Debert. And then, a third and final cluster in Shubenacadie, Milford and Enfield. 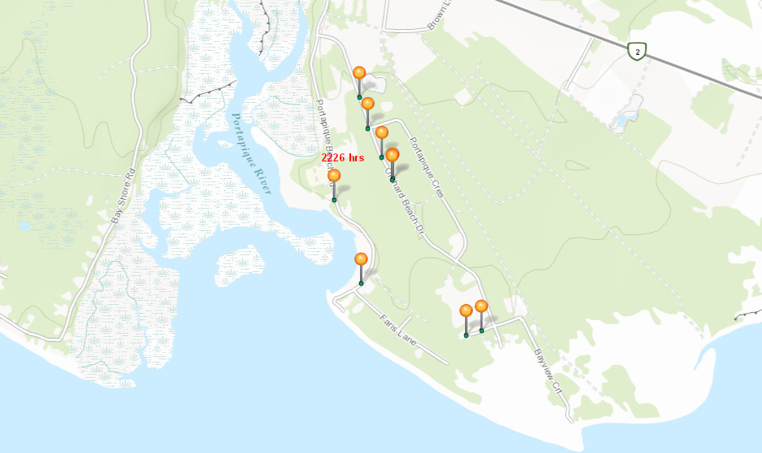 A closer view of the locations in Portapique, Nova Scotia where shooting incidents first occurred. Markers depict where victims were found. (RCMP)

What we learned as part of the investigation is that on April 18 before the first call came in there was an assault between the gunman and a person known to him in Portapique.

The victim managed to escape from the gunman and hid overnight in the woods.

Following this, police received the first call to 911 with a report of a shooting at a home in Portapique.

Officers arrived at 10:26 p.m. where they located a male leaving the area with an apparent gunshot wound.

They learned that this man was shot while driving his vehicle.

The victim indicated a vehicle drove by him while he was driving and the shot came from the passing vehicle.

Officer arranged for EHS to attend to the victim and he was taken to hospital by EHS.

Several of their units responded to the area and upon arriving, located several people who were deceased lying in the roadway. There were also several structures already on fire.

In total there were over seven locations where people were found deceased. Many of the deceased were discovered while responding members were checking homes for victims and/or suspects. At this time, police began looking at a number of possible suspects as a result of the information they were receiving.

While the situation was unfolding, the Critical Incident Program was engaged and staging to take control of the critical incident.

At this point perimeters were established. Specialized Units responded including Police Dog Services, Emergency Response Teams and a DNR helicopter. We also had the Explosives Disposal Unit, crisis negotiators and the Emergency Medical Response Team on stand by. Within a very short time, we also engaged specialized units and resources from J Division in New Brunswick.

Over a lengthy period of time, first responders engaged in clearing residences, searching for suspects, providing life-saving measures. Telecommunicators remained on the line with witnesses in the immediate area.

Fairly early into our involvement, we learned of a possible suspect and learned the individual lived in a home in the community of Portapique.

The possible suspect’s home and garages were fully engulfed in flames. Two police vehicles as well as a third vehicle were also burning on the property.

We also learned that the gunman was in possession of a pistol and long-barrelled weapons. He was also known to own several vehicles that looked like police vehicles.

Our efforts to locate the suspect continued throughout the night.

After 0630, at daybreak, a victim emerged from hiding after she called 911.

Our officers responded and it was at that time that, through a significant key witness, we confirmed more details about Gabriel Wortman. This included the fact that he was in possession of a fully marked and equipped replica vehicle and was wearing a police uniform. He was in possession of several firearms that included pistols and long guns.

At that time, we issued a BOLO (Be on the Look Out), a bulletin that included a description of the suspect and vehicle, to all police officers in Nova Scotia.

We maintained containment of the scene and continued to search for the suspect. 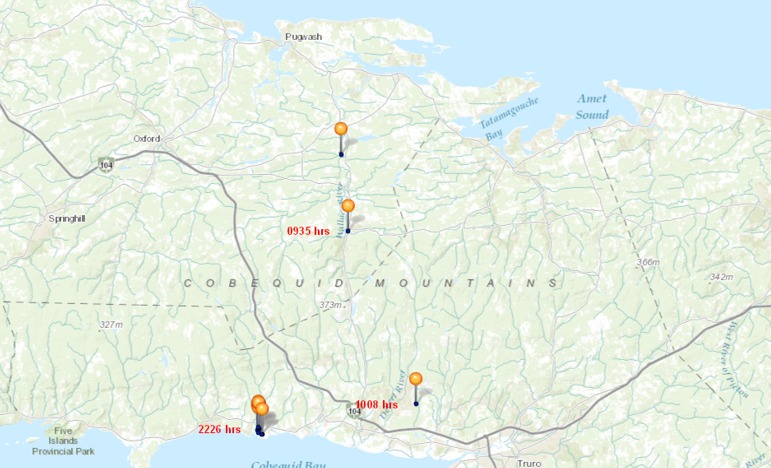 More than 12 hours after our initial arrival in Portapique, we began receiving a second series of 911 calls in an area more than 60 km away.

Our investigation has revealed that the gunman attended a residence on Hunter Road in the Glenholme area.

At that location, the gunman killed two men and a woman and set residence on fire.

At least two of the victims here were known to the gunman.

Our investigation uncovered that the gunman then travelled to a residence on Hwy 4 in Glenholme.

He knocked on the door and awoke the residents. He was known to the occupants. They identified him to 911 call takers and said he was driving a police vehicle and carrying a long gun.

They didn’t answer the door and he left.

The gunman continued southbound on Hwy 4 from Glenholme to the Wentworth area.

He encountered a woman out walking and shot the woman at roadside. He continued south towards Debert.

At that point he encountered two people driving their vehicles. A witness described that he pulled over one of the vehicles and shot one of the occupants. He continued driving down the same road, encountered a second vehicle and shot and killed that female victim.

During this second series of events, from the timing of the first call on Hunter Road to the last incident, it was about a distance of 44 kilometres. 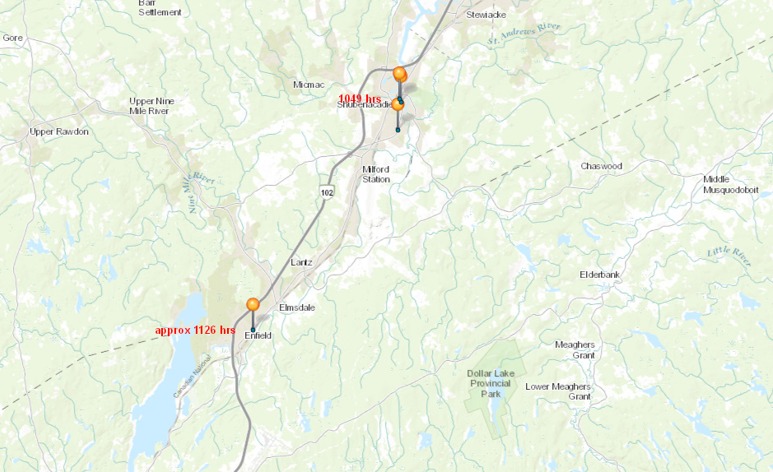 Markers depict locations where victims were found as well as the start time of the incident: Milford (10:49 am, April 19);
Enfield (approximately 11:26 am, April 19) (RCMP)

The approaching police vehicle was actually driven by the gunman. The gunman pulled up beside Constable Morrison and immediately opened fire. Constable Morrison received several gunshot wounds and began to retreat from the area, driving his vehicle away from the scene. He notified other officers and dispatch that he was shot and that he was en route to EHS station for emergency medical attention.

A passerby stopped and was fatally shot by the gunman. The gunman set both Constable Stevenson’s vehicle and the replica police vehicle on fire. He left the scene, driving south on Hwy 224 in the passerby’s vehicle, which was described as a silver SUV.

The gunman travelled south on Hwy 224 for a short distance where he entered a home on the East Side of Hwy 224. That home happened to be the home of a woman known to the gunman. The gunman shot and killed the female resident.

The gunman then removed the police clothing he was wearing and transferred his weapons to the female victim’s vehicle which was a red Mazda 3.

The gunman travelled south on HWY 224, coming to the Big Stop Irving in Enfield. While he was at the gas pumps, one of our tactical resources came into the gas station to refuel their vehicle. When the officer exited the vehicle, there was an encounter and the gunman was shot and killed by police at 11:26 a.m.

The distance the gunman travelled from the first shooting of Constable Morrison to the encounter with police at the Big Stop is approximately 23 km.

The situations within the clusters of critical incidents were rapidly evolving, which has increased the complexity of investigating the horrific incidents.

Nova Scotia RCMP continue to ask for anyone who has information about any of these incidents to contact us. We are looking for photos, videos, and any other material that may help. No piece of information is too small, and if you have information we would like to hear from you.

We ask those with information to call the RCMP tip line at 1-902-720-5959. We’ve already gotten many tips and we thank the public for taking the time to reach out. 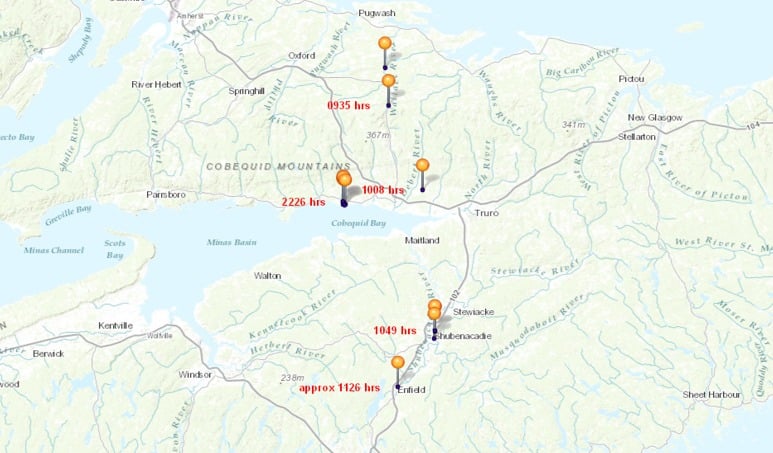 A topographical map of the region of Nova Scotia where shooting incidents occurred. Markers depict the locations and start times of incidents. (RCMP)