The science and logistics of battling B.C.'s wildfires

With hundreds of fires and thousands of people to fight them, the crisis in B.C. demands cutting-edge methods and choreographic planning 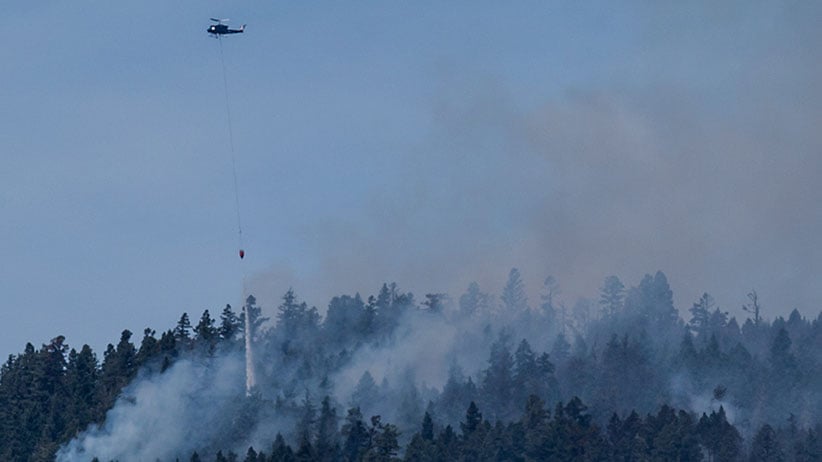 A helicopter drops water on a wildfire burning on a mountain near Ashcroft, B.C. (Darryl Dyck/CP)

Fires are burning through B.C.’s Interior, but the response effort is partly exterior. While municipal fire departments extinguish house and structural fires—from embers that land on rooftops or power lines—the unified command falls to the B.C. Wildfire Service. As the fire chief in Hope, B.C., Tom DeSorcy, says, “it’s their show.”

Last Friday, a weather system brought high winds and dry lightning to the Cariboo region, igniting 140 fires, followed by another 100 on Saturday. As the province declared a state of emergency, the B.C. Wildfire Service put out a call to the Canadian Interagency Forest Fire Centre, which asked all of the municipal and provincial fire crews in the country to list what they could offer. Fire departments in Saskatchewan, Alberta, Ontario and New Brunswick sent fighters and equipment. The provincial government also put a request to Public Safety Canada, which in turn put a request to the Canadian Forces for extra help. Firefighters are notoriously gung-ho, but organization is essential, and they can’t simply expect to mask up and start their engines.

“There’s lots of young guys who say, ‘I wanna go to Williams Lake and help them,” explains DeSorcy. “It’s more coordinated than that.” The fires span around 2,000 to 12,000 hectares in area each, a fraction of the 500,000-hectare fire that consumed Fort McMurray, but the dispersion of the ignitions means that the response needs to be just as carefully choreographed.

“They’re still large enough where we’re not just going to be doing a direct attack,” says Kevin Skrepnek, chief fire information officer for B.C. Wildfire Service. Instead, they are contracting bulldozers and excavators to dig perimeters and remove trees or other fuel around the perimeter of each burn. They are also spraying red fire retardant, a slurry made up of fertilizer and water which is best used as a barrier sprayed in front of a fire. Helicopters and other aircrafts are dropping water directly on the fire as a suppressant, but the dry air means the water evaporates quickly. “In B.C., we do use a lot of retardant,” says Skrepnek. The weather, he says, “it’s just so dry.”

Along with Canadian Forces personnel, municipalities from the coast are sending helpers when asked. They sometimes camp out at potential hot spots, a tactic called “staging” (one group of firefighters in the Gordon Bay area of Adams Lake was caught ignoring a sign that banned campfires and lighting a fire in their down time). Responders are also doing controlled ignitions, or “burn backs,” by creating perimeters and lighting the designated areas with matches, to reduce the wildfire’s potential fuel.

The town of Hope has sent one water tender and two volunteer fighters to Williams Lake. However, since the fire could potentially hit Hope, the department is reserving its three fire engines, second water tinder, 24 other volunteers and tanker with compressed air foam for rapid attack. DeSorcy says, “we certainly don’t leave ourselves short.”