The UN is taking measures to protect those in refugee camps from the spread of the coronavirus. But there is little room for social distancing in the camps, where people often have to line up for food and water. 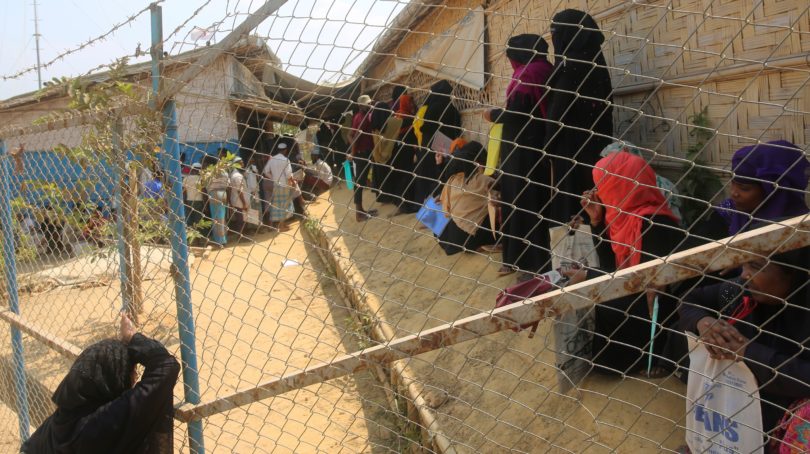 In January, Abdi* left Kakuma refugee camp in Kenya for the capital Nairobi to find work to support his siblings. His mother passed away recently, and at 29, Abdi is the eldest and the head of the household. Even for someone as bright and motivated as him, finding employment as a refugee is tough in a country that doesn’t permit him to work. That was before a global pandemic—now, the outlook is bleak.

Abdi is keeping up to date with how COVID-19 might affect Kenya, and speaking frequently with his siblings, the youngest of whom is 10, back at the camp. He’s worried about the quality of information available to them. “It’s really scary for them,” says Abdi. “They’re [asking], ‘What does it mean? What is social distancing?’ These are refugee camps and they are overpopulated—you don’t have walls, you just have, like, iron sheets. I mean, we’re just praying.”

While people all around the world are being advised to wash their hands frequently and keep a two-metre distance from others, those living in Kakuma—and all of the 2.6 million people currently living in refugee camps— often don’t have the option to do these things.

RELATED: Coronavirus reveals how quickly governments and corporations can find money—when they want to

There are increasing concerns about the spread of COVID-19 in camps in Greece, and Syria. But many of the largest refugee camps are in countries that have not yet been hit heavily by the virus, including Kenya, Bangladesh and Uganda. While each camp has its own distinct conditions, they’re essentially small towns already battling public health crises: overcrowding, poor sanitation and diseases that have largely been eradicated elsewhere, like tuberculosis. People with weak immune systems and respiratory infections—groups for whom COVID-19 can be fatal—are frequently over-represented in refugee camps.

“Nobody has any pre-immunity to this virus, so if and when it gets a grip, it’s likely going to spread through those communities like wildfire,” says Joseph Belliveau, executive director of Médecins Sans Frontières (MSF) Canada.

In Kenya, two camps are home to over 490,000 people. Both are isolated from major centres— Dadaab is in the eastern part of the country, closer to the border with Somalia, while Kakuma is in the northwest, close to the borders of South Sudan and Uganda. Travel by UN staff in and out of camps has been reduced, especially since many staff travel out of the country frequently, says Nairobi-based Eujin Byun, spokesperson for UNCHR Kenya. They’re asking staff who are already at the camps to stay put. “If they leave the area, there’s a huge chance they can’t come back,” says Byun.

Cross-border travel by refugees is also being monitored, says Byun, accompanied by a message that refugees are at increased risk right now when they travel. “We’ve seen a lot of the reduction in cross-border movement,” says Byun.

The UNHCR is working closely with its partners and the Kenyan government on the ground, emphasizing hygiene as a first line of defence while also preparing for the worst by boosting supplies and isolation beds.

In Bangladesh, which replaced Kenya as home to the world’s largest refugee camp in 2017, similar precautions are being taken. There are nearly 860,000 people in the Kutupalong and Nayapara UN camps in Cox’s Bazar, the large majority moving in when state persecution and a military crackdown on the ethnic minority Rohingya group in Rakhine state drove over 700,000 people out of Myanmar two and half years ago.

Saifullah Muhammad’s family, who are Rohingya refugees, has been living in Nayapara camp since 1992, after a wave of violence against the Muslim minority in Myanmar brought many to Bangladesh. Muhammad left the camp in 2006 to go to school in Thailand. Now living in Kitchener, Ont., the graduate student at the University of Waterloo was set to travel to Bangladesh for research next month—a trip that, like all other travel plans, has been postponed. The 33-year-old was going to see his parents and two younger brothers for the first time in 14 years. When he spoke with his family last week, in true maternal form, his mother fretted about the partial lockdown in Canada, advising him to stay inside. But Muhammad is more concerned about his family than he is about himself.

“If it spreads… it will be a massive disaster for our community,” says Muhammad.

The refugee camps in Bangladesh are among the most crowded—in one of the most densely populated countries—in the world. Although efforts have been made to improve housing, many families in the camps live in cramped, makeshift shelters, with bamboo poles holding up plastic sheeting. Their children go to school in the camp, though these have been shut down since March 16. There is not much room to socially distance. Everyone waits in long lines for water, food rations and other essential services.

RELATED: The ‘caremongers’ getting food and essentials to the country’s most vulnerable

Louise Donovan, a spokesperson for UNHCR Bangladesh, says the agency is focusing on providing people with good information to prevent panic and misinformation. “What’s positive to see is that community leaders seem to really be listening to the messaging, and they’ve called off events,” says Donovan on the phone from Cox’s Bazar.

But Muhammad is worried about the information his friends and family have access to in the camp—he says some don’t even know what COVID-19 is. Part of the problem is the Bangladeshi government has limited access to 3G/4G networks in camps since September.

“The limitation on internet access is a huge barrier,” says Shafi Mohammed, who lives in Kutupalong camp. Mohammed works as an interpreter and sees the communication efforts being made but thinks they need to be ramped up, given the combination of a lack of reliable internet access and the reality that there are hundreds of thousands of people in the camp who need this information.

RELATED: The race to get personal protective equipment to health care workers

The existing health facilities are bracing for impact. Currently, there are 35 primary care centres, four hospitals and 400 isolation beds available in the camps. The UNCHR has put out an emergency fundraising appeal for US$33 million for medical equipment, tube wells to provide clean water, and latrines to improve sanitary conditions. But the shortages of supplies and staff both pose challenges.

MSF, for instance, has 50,000 staff around the world, and although Belliveau says about 80 per cent are hired locally, 20 per cent often come from outside the country they’re working in. In a situation where health care workers are desperately needed, the combination of fewer flights, keeping staff safe and also ensuring they aren’t vectors of the disease is “putting us in a real challenging situation,” says Belliveau.

Back in Nairobi, Abdi has to make a decision about returning to the camp. He’s currently living with three other people in a single room, in a building with three floors filled with similar units and two shared washrooms on each floor. He’s asking questions familiar to everyone around the world right now—when should he self-isolate? Is it okay to take a 20-hour bus ride back to where his family is?

He says he’d feel safer at the camp because he isn’t Kenyan and is worried about what might happen to him if he’s found living outside Kakuma if the country goes into lockdown. But he’s also well aware of the risk of an outbreak in the camp, having seen the spread of other diseases that have been eradicated elsewhere, like cholera. “This is now on another level,” says Abdi.

*Abdi is a pseudonym. As a refugee, he is not permitted to work in Kenya. His name has been changed to protect him.