The terrible trend of bombing hospitals

Another MSF hospital is hit – this time in Yemen. Is this the end of medical care in war-torn countries? 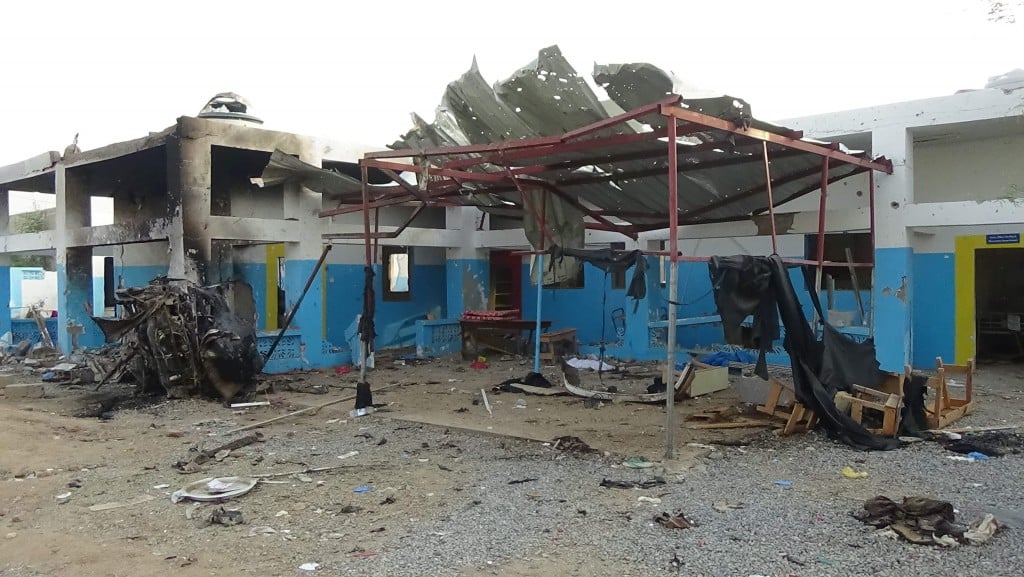 A hospital supported by Doctors Without Borders is seen after was hit by a Saudi-led airstrike in the northern town of Abs, Yemen, Tuesday, Aug.16, 2016. Yemen’s Houthi rebels condemned the Saudi-led military coalition on Tuesday over an airstrike that hit a hospital, killing several people. (AP Photo)

The death toll from Monday’s Saudi-led airstrike against a Yemen hospital rose from 11 to 14 overnight. Among the dead, a Doctors Without Borders, or MSF, staff member. The attack injured 24 others. The Abs Hospital, located in the north-western province of Hajjah, is the fourth MSF-supported hospital in Yemen that has been attacked in the past year.

Conflict has been waging in the middle-eastern country for 16 months, with the frequency of bombings and number of casualties rising. Between April 11 and August 11, 2016, the United Nations documented 815 civilian casualties. In a statement Tuesday, UN secretary general Ban Ki-moon said he “is deeply disturbed by the intensification of airstrikes and continuing ground fighting and shelling, especially in populated areas.”

Joan Tubau, general director of MSF Spain’s mission in Yemen, told Maclean’s he fears this troubling trend could lead to the end of medical humanitarian action in active front-line zones.

Q: What’s the current situation right now at the hospital in Yemen?

Q: Has this hospital been attacked in the past?

A: No. This hospital is a hospital we rebuilt. It was not functioning mid-2015, so we basically rebuilt it in collaboration with health authorities. It’s generally an MSF-supported hospital that started functioning basically a year ago. This particular one hasn’t suffered an attack. It’s not a front-line zone. It’s not a place of active conflict or active violence in Yemen, which makes the whole airstrike even more confusing, because there was certainly no military possible targets or facilities or garrisons around. It’s a town behind the front lines, so there’s no explanation for this attack.

Q: What are the next steps for MSF in dealing with this?

A: First of all, of course, is taking care of the injured, but also the staff and patients that need to be transferred to different facilities. We need to gather as much understanding and analysis of how this all came about. We definitely need a clear position from the Saudis on how this whole thing has happened. To my understanding at this moment, not in a totally formal and totally public manner, that basically, what I hear through media, they’re admitting a mistake in targeting the hospital. But we need to understand how this happened. At this moment, we have no sufficient issuance that we can reopen the hospital and have not only our staff, but more importantly, our patients and their families be safe in facility. This is the kind of analysis we need to carry out in the next few days and see to which position this leads.

Q: What are you hearing from MSF staff members on the ground in Yemen?

A: Talking to our teams, our teams are very concerned. I mean our teams in places like Yemen, you never get used to war, and you never get used to shelling or insecurity or bombing. But our teams in Yemen are made up of people with a lot of experience in other conflicts. And what I hear from these people, is that today the level of violence is incredible. The indiscriminate bombing and shelling is incredible from all belligerents. And nobody spares a civilian population or civilian facilities, which is a very basic of humanitarian law. Not hospitals, not markets, not mosques, not water sources. What we hear is that the violence and the conflict in Yemen is at a very high peak and that it’s being fought by all belligerents disregarding completely civilians in all senses.

Q: What kind of global response are you hoping to come out of this tragedy?

A: This is a question we’ve been posing ourselves for many months now. And I have to say that the more these things continue happening and even worsening, events like this, not only in Yemen, but in Syria, Afghanistan, areas where we suffer the cruellest attacks, I have to say honestly and plainly that it’s difficult to figure out a positive outcome of this. We’ve had a UN resolution, maybe two months ago, no longer than two months ago, in which the Security Council put out a statement that reaffirmed the principles of humanitarian law, and the principles of respect of the medical action in conflict zones and in front lines. And this reaffirmation of these basic principles of respect of patients and civilians and doctors and nurses in front lines, they were reaffirmed as a unanimous resolution of the Security Council two months ago. And this is what has happened barley eight weeks after.

It’s very difficult to see a way forward that sheds a bit of light and gives us reason to be optimistic. I mean, not only pessimistic for ourselves and our patients and action on our ground, but this is a tip of the iceberg. What happens to MSF facilities, at the end of the day, is just an example of what happens to any other medical facilities in Yemen or in Syria or in South Sudan or in Afghanistan. The absolute disrespect for the medical mission in wars. And that to us is a very terrible trend, a terrible red line, it could very well mean in a way that we are moving towards the end of a medical humanitarian action in active front lines. Basically, we are getting to that point where it’ll be too risky, not possible, to have a fully functional hospital in the front line, which is a place where civilians and populations are more at need of medical care.

When the last hospital was hit, there were 13 new-born babies; babies that had been delivered a few hours before the strike. And that’s the kind of structures that are being hit. As I said, today, I can only see and sound a bit pessimistic. I see no plea or political determination. And when there’s political statements and nice words, they don’t materialize into anything tangible on the ground in reversing this trend of attack after attack in conflict zones.