The toxic wake of Islamic State

For one Iraqi town, the fear of ISIS has been replaced by another kind of threat left behind by the terrorists: acrid oil fires, blotting lungs and water 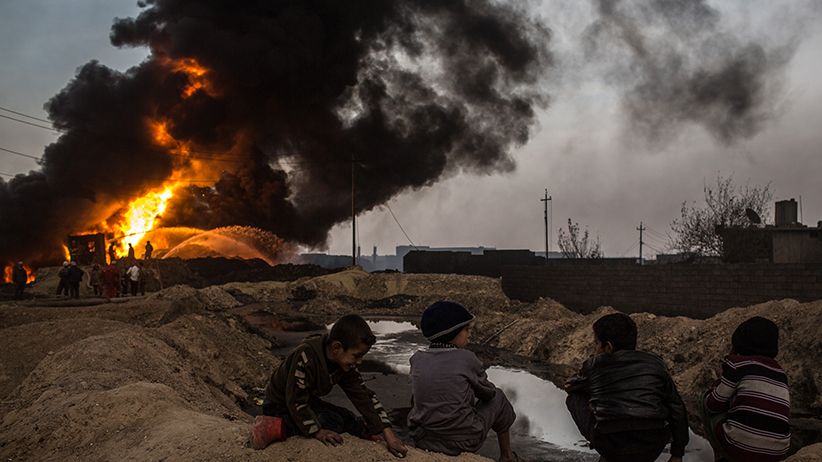 At first glance, it seems as if Qayyarah, a northern Iraqi town 30 km south of Mosul, remains under the control of Islamic State. The first sign is the black flag, a symbol used by the jihadist movement, flying over the bridge spanning the Tigris River that leads into the town. More appear on the eastern approach: black flags fluttering over mosques and the ruined shells of what appear to be administrative buildings; more black flags hoisted atop homes in the town’s destitute neighbourhoods.

It would be a frightening vision indeed if the fact of Qayyarah’s liberation last August was not underscored by the ring of checkpoints that encircle it, manned by the Iraqi army. No beards among the soldiers there, or the short pants and long tunic that are the hallmark of ultra-conservative Islam.

Instead, it is the darkness, the thick cloud of it during daylight hours, that is a reminder that ISIS once ruled the estimated 15,000 civilians who call Qayyarah home. The raging oil fires its fighters left behind as they retreated, and the toxic plumes of smoke, are their macabre parting gifts to the locals.

Related: Picking up the pieces in Qaraqosh, after ISIS

When the wind blows in the right direction, which is often, the acrid smoke blots out the sun and stains everything black, turning homes into ghoulish shadows, covering cars in coagulated particulates, like post-apocalyptic hail, and transforming the flags—which on closer examination turn out to be the red, white and black of the Iraqi banner—into a trembling echo of ISIS’s presence.

This is, arguably, the first chemical attack perpetrated during the Mosul offensive by the self-anointed saviours of Iraq’s Sunni Muslims. And it is Sunni Muslims who will die because of it. The effects are being endured on a daily basis. Here, the chemicals may not have been the dreaded mustard gas or chlorine it’s believed the militants possess but the slow-moving disaster of 19 oil wells set ablaze.

Water sources have been poisoned with the ecological domino effect tumbling down from there. Food is contaminated and the air quality so bad it prompted an Indian newspaper to run a story with the headline: “There is one place where the air is worse than Delhi.”

The town’s only clinic, a makeshift primary care centre set up in an abandoned house by the France-based Women and Health Alliance International (WAHA), has been overwhelmed by people, mostly the very old and the very young, suffering from respiratory illnesses. It has one ventilator and a cabinet full of anti-inflammatories, bronchodilators, and antibiotics.

Related: Canada’s role in Iraq is bigger than you think

“We have 10 doctors here,” says Ali Muhammad Faraj, a local cardiologist who lived under ISIS rule and remained in Qayyarah after it was ousted. “On bad days, we see up to 250 patients with breathing problems. We only have the basic tools to treat the symptoms but I’m concerned about the long-term effects, things like asthma, carcinoma, and emphysema.”

After nearly three months, the lack of response to the crisis is frustrating, Faraj adds. “I have only 300 masks I can distribute to 15,000 people,” he complains. “I’m only giving them to those living closest to the fires.”

No one can say exactly why neither the Iraqi government nor international organizations acted more urgently to protect Qayyarah’s civilians. Government officials claim they are doing what they can but simply do not have the resources to deal with the problem. “This is going to be a disaster for years to come,” says one American health worker in Irbil, the capital of Iraq’s Kurdistan Region where most aid workers are based, requesting anonymity. “No one wants to be responsible for it. When people start dying—and they will start dying—no one wants to be blamed for not doing more.”

Firefighters battling the blazes are at a loss to explain why civilians have not been evacuated. It will take “months” to put out the oil fires, one of them tells Maclean’s. Islamic State militants occasionally fire mortars at the firefighters, shutting down their operation for days on end.

But instead of evacuating the town, thousands have been allowed to return, including those fleeing the fighting in surrounding villages. Now they have no place to go. They are barred from leaving the town for the safety of the Kurdistan region to the east, because of fears of ISIS militants hidden among them. The only refugee camps available to them are already overcrowded and too close to the burning oil wells to provide safety from the toxic smoke in any case.

“We are trapped here,” says Bassem Muhammad Radhi, a father of seven whose house is situated not much more than 100 m from one of the fires. “We don’t have the money to relocate to another part of Iraq. The Kurds won’t take us. When we wake up in the morning, it still looks like night. All of my children are coughing up black phlegm. Maybe we will die here. But at least we die free from the Islamic State.”