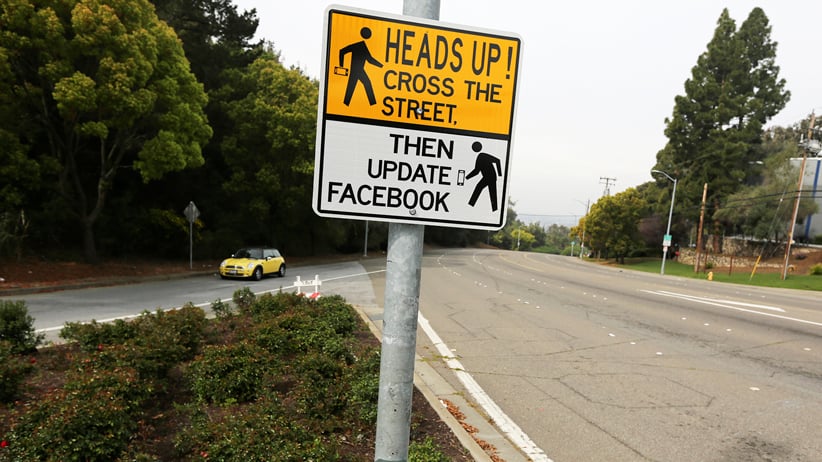 Sign of the times: A sign in the San Francisco suburb of Hayward, population 150,000, urges pedestrians to be safe smartphone users. (Robert Galbraith/Reuters)

Good news: Reach out and talk

In addition to Germany, all members of the United Nations Security Council—Britain, France, China, Russia and the U.S.—have begun talks with Iran about lifting the heavy sanctions against the country if it agrees to curb its controversial nuclear program. The talks may yet prove premature, however; America’s Secretary of State John Kerry says the U.S. might still walk away from the table, and the Republican party’s recent open letter to Iran—suggesting any deal it reaches with the U.S. will expire when President Barack Obama is replaced in 2016—is not helping matters. But any step toward meaningful dialogue is a boon when the key player at the table was, not too long ago, an “axis of evil” country.

Vladimir Putin, it turns out, is still alive and well. The Russian president returned to the spotlight after a mysterious 11-day absence from public life. The danger he poses to the world became even more clear in a documentary that aired last weekend, in which Putin said that during last year’s annexation of Crimea, Russia was prepared to activate its nuclear arsenal. Meanwhile, this week, Moscow reportedly gathered more than 38,000 troops, 50 ships and submarines and 110 aircraft in the Arctic for a five-day military exercise. We may not know the exact implications of this, but chances are they’re not good.

Ontario may finally join the ranks of other civilized provinces that allow people to buy alcohol at places not run by the government. Queen’s Park said this week it will auction off licences to sell beer and wine in 300 supermarkets across the province. The Toronto Star said on Friday that the upcoming spring budget “will boast the greatest liberalization of booze-sales laws in Ontario history.” Revenue from the new system could also help the province tackle its $12-billion deficit. We’ll drink to that.

The measles outbreak in a community outside Montreal, which health officials attribute directly to unvaccinated children, has risen to 119 confirmed cases, up from 32 last month. Meanwhile, in the United States, a new study has confirmed that the recent measles outbreak at Disneyland is also entirely attributable to unvaccinated kids. At least all this pales in comparison to the Ebola crisis in West Africa, where the death toll from the virus just passed the 10,000 mark. Imagine the good that a readily available vaccine could have done there. 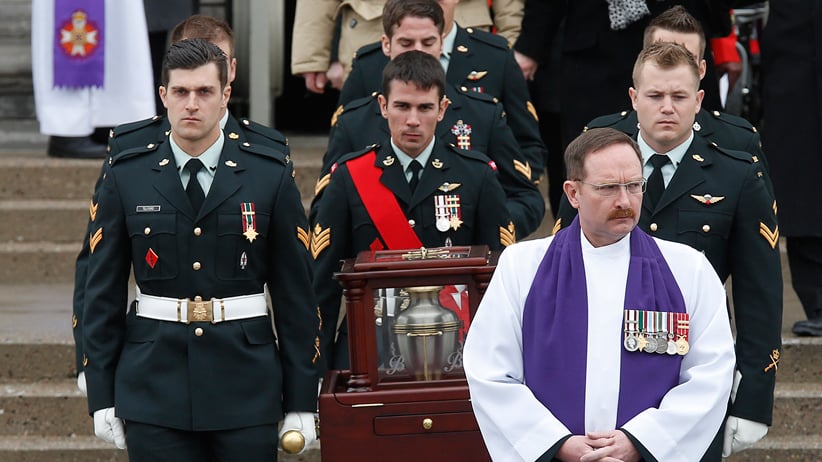 Casualty of war: Pallbearers carry the remains of Sgt. Andrew Doiron after his funeral in Ottawa. Doiron was killed in a ‘friendly fire’ incident in Iraq. (Chris Wattie/Reuters)

Iraqi forces are still struggling to drive Islamic State militants out of Tikrit, despite assertions from Iraqi officials that the army would regain control of the city within days. Islamic State remains a serious and deadly threat in the region. Prime Minister Stephen Harper’s cabinet is reportedly set to extend the Canadian combat mission against the terrorist group for more than six months, and possibly up to a year. The prospect of Canadians being sent into harm’s way is nothing to celebrate, but this is a foe worth fighting—no matter how long that fight lasts.

Cyclone Pam has erased nearly an entire nation: The UN reports that 3,300 people are displaced and 11 people have died in the tiny island nation of Vanuatu as the result of the cyclone. According to the UN Disaster Assessment and Coordination team, evacuation centres have been erected in the capital city of Port Vila, but communication with islands in the Pacific archipelago remains down and food and water across the region are scarce. President Baldwin Lonsdale says the storm has effectively “wiped out” all the nation’s development in recent years.

A wildlife study in Alberta has revealed the identity of the most industrious bear in Banff National Park. According to researchers studying grizzlies in the park since 2010, a large male bear (No. 122), known to locals as “the Boss,” has fathered more bears than any other grizzly in the area. (He has produced five offspring with three partners.) The study’s official purpose is population tracking through DNA samples, but it is nice to get some more illuminating details about the lives of bears in the process.

It’s been a rough week for Canadian business. On Jimmy Kimmel Live, Obama poked fun at his customized BlackBerry. He only uses it, he quipped, because of its dearth of special features. In other news, airplane manufacturer Bombardier lost its second big prospect in a week for its struggling CSeries aircraft when German airline Deutsche Lufthansa AG decided to go with a Brazilian model instead. Its next hope now hangs on a letter of intent from a new Malaysian airline to buy 20 CSeries jets. At least our economy will always have oil to fall back on.

Related: The Maclean’s A-to-Z encyclopedia of the oil crash 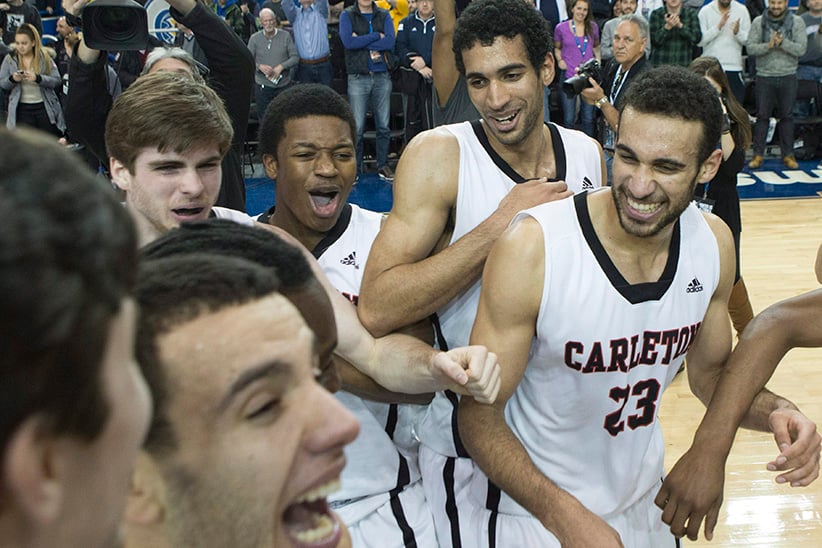 Check out Macleans.ca for our daily newsmakers series, highlighting the names making waves that day.

A social media storm erupted after Stefano Gabbana said he opposed gay adoptions, and criticized in vitro fertilization for creating “children of chemistry.” John, who has twins with husband, David Furnish, was outraged—“How dare you refer to my beautiful children as ‘synthetic,’ ” he wrote, signing off with #BoycottDolceGabbana. John’s friend and designer Victoria Beckham openly supported the singer’s position, but the tempest didn’t end there. The Italian Gabbana, who designs with his longtime partner, Domenico Dolce, fired back with “Fascist!” and the tag #BoycottEltonJohn.

Related: What Noel Coward would say about the Dolce & Gabbana fiasco

After a decade, Prince Harry is leaving full-time service in the British armed forces. “I am at a crossroads in my military career,” he said. Harry, 30, served two tours in Afghanistan, including his last as an Apache attack helicopter pilot. Last year, he launched the Invictus Games for wounded troops. Just don’t expect the royal to stop helping veterans, or give up wearing his uniform on special occasions. In April, he will attend events marking the 100th anniversary of Gallipoli in Turkey.

The Halifax-based mathematician has fired another broadside against the airline industry. He’s launched a constitutional challenge at the Canadian Transportation Agency (CTA), arguing it must disclose evidence used when reviewing passenger complaints. Lukács’s advocacy on behalf of the flying public has already paid off for all passengers, including clear rules, and cash, for those bumped from flights. Given he boasts 24 wins in 26 cases filed with the CTA, no one is betting against him this time.

The B.C. premier has said the province cannot afford to increase welfare rates—which have remained static since 2007—but the ministry of jobs announced a new $24.5-million plan offering free tuition, child care, medical costs and transportation to single parents on income or disability assistance, a.k.a. welfare. Said Jobs Minister Shirley Bond, “What we’ve really been grappling with is: Is it right to say to a single parent who is struggling that you either stay home with your children or you go to a training program?” Tuition would be limited to courses relating to one of 60 occupations the provincial government deems “in demand.” Philosophy students and budding entomologists need not apply.

The musician has been trying to be taken seriously as a fashion designer for the past eight years— and why not? It’s not as if less talented celebrities haven’t attempted to wade into design. But, for all the mockery he’s endured, West’s one sure sign of acceptance in the fashion world is his upcoming cameo in Zoolander 2, the sequel to the 2001 hit in which Ben Stiller reprises his role as a vain model. West will join Vogue editor Anna Wintour, Naomi Campbell, Cara Delevingne and others making cameo appearances in the film, expected in February 2016.

FILED UNDER: newsmakers The World As We See It