Like many rural locales across the country, the two communities hadn’t been a priority for big telecommunications companies. So residents fundraised to get a cell tower built. 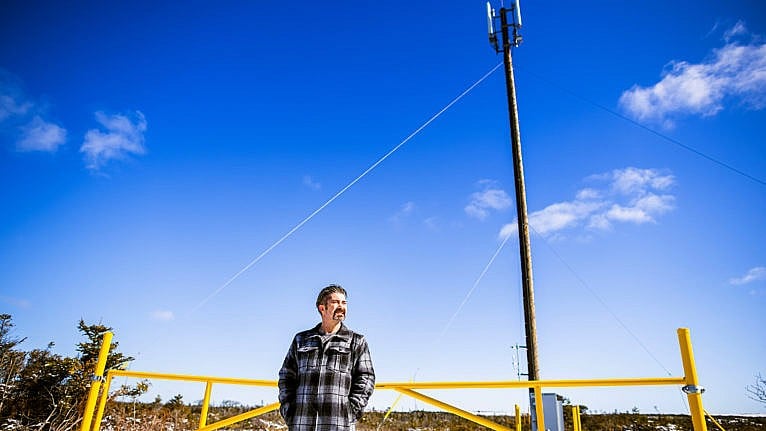 The mountain road between Cape St. George and Mainland, on the Port au Port Peninsula off the west coast of Newfoundland, gets treacherous in winter. The route is sometimes closed due to bad weather. But conditions can quickly change even when it is open.

A few years ago, while commuting to Mainland, Catherine Fenwick got caught in a blizzard on that road. Her vehicle ended up stuck on a snowdrift, the wheels lifted off the ground. “It was a whiteout. No visibility at all. My car got covered in snow and I kept going out and wiping it off, and my jeans were frozen solid,” she remembers. A tense hour passed. “I was writing my last will and testament on a piece of paper.”

Fenwick’s husband knew she had gone out to brave the elements. Though they had no way to communicate, he came looking for his wife in an all-terrain vehicle. He found her.

That was the way of things in the francophone communities of Mainland and Three Rock Cove before cellphone service became available in December 2020. Fishermen would go out on the water and hikers would wander the woods with no way to dial emergency services. On-call social workers would sit by their landlines all day lest they miss a shift. When kids came from nearby towns to Mainland (anglicized from the French name La Grand’terre) to attend the region’s only francophone school, their parents couldn’t reach them.

A local high-schooler got stranded in a snowstorm this winter on the same hilly road as Fenwick. But this time, thanks to the new cell tower, it wasn’t a matter of life or death. He only had to walk a short distance from his car before picking up enough signal to call his mom.

Dwight Cornect, who headed a fundraising committee that helped bring service to the area, says the access has changed not only people’s day-to-day lives and economic opportunities, but also their mental outlooks. “It’s the sense of belonging that is instilled in people—‘Whoa, we are important enough to have cell service. I’m not being left behind here as the rest of the world is advancing,’ ” he says.

Everyone automatically feels safer, adds Fenwick: “You know if something happens to someone you love, or if there’s an urgent call, you will get it.”

The two towns, with a combined population of about 500, represent both the life-changing effect cell service can have on a community—and the inertia rural people still encounter when they try to access what so many of their fellow Canadians take for granted. Like many rural locales across Canada, the area hadn’t been a priority for big telecommunications companies, which typically look for a strong business case and a larger customer base to install infrastructure at the companies’ own cost.

According to the federal government’s 2019 Connectivity Strategy, about one per cent of Canadians still don’t have cell service. There is increasing access to federal and provincial funding for this very problem, but the details are often complicated, with a significant burden on tiny communities to negotiate and fundraise.

About four years ago, RDÉE TNL, a non-profit, bilingual economic development network, began working with the towns to find funding. They became one of the first successful applicants for a cost-sharing initiative, which has been renewed, that saw the provincial government offering 25 per cent of the cost of new infrastructure. And they secured an agreement with Bell Mobility: if local people could cough up another 15 per cent of funds for a $530,000 SimpleCell tower—about $80,000—Bell would pay for the rest.

Fundraisers started going door to door in May 2018. Cornect says most households contributed $100 to a GoFundMe page. Next came a silent auction. Car washes in Stephenville, a bigger town just off the peninsula. A sock hop for kids. A darts tournament. Another darts tournament. (“People love darts here,” says Cornect.)

A robust list of nearby municipalities, businesses and not-for-profit organizations chipped in. RDÉE’s Wendy Brake secured federal funding from the Canadian Internet Registration Authority. And in June 2019, the last chunk of money came from the proceeds of a taping of CBC’s From Inside the Circle, a show that turns rural workplaces into concert venues.

Then came an agonizing wait amid bureaucratic delays, including a Crown lands application. As the project stalled in March 2020, ARCO, a regional francophone organization for which Cornect is the president of the board and Fenwick is the executive director, took the reins of the project in an attempt to speed things along.

The tower went up in the fall and on Dec. 7, at 7 p.m., it went live—but not without early glitches. Some residents’ phones or pay-as-you-go plans were incompatible with the 4G tower. Others opted for no-data plans that nonetheless required voice-over-LTE capability to be enabled, which Fenwick found out during hours of customer service calls on those residents’ behalf. She and Cornect say better communication on such details would save other communities headaches.

Cyr Couturier, president of RDÉE’s board, hopes the story of Mainland and Three Rock Cove will inspire similar efforts elsewhere. “We have an increasing urban-rural divide in this country,” Couturier says, to which politicians pay plenty of lip service without always getting their hands dirty. To close those “big gaps” in infrastructure, he says, communities should expect to put in plenty of their own elbow grease.

This article appears in print in the May 2021 issue of Maclean’s magazine with the headline, “Thank you for holding.” Subscribe to the monthly print magazine here.