The kid who outsmarted the World Trade Centre's security system, and Kanye West and Kim Kardashian for their sartorial authority 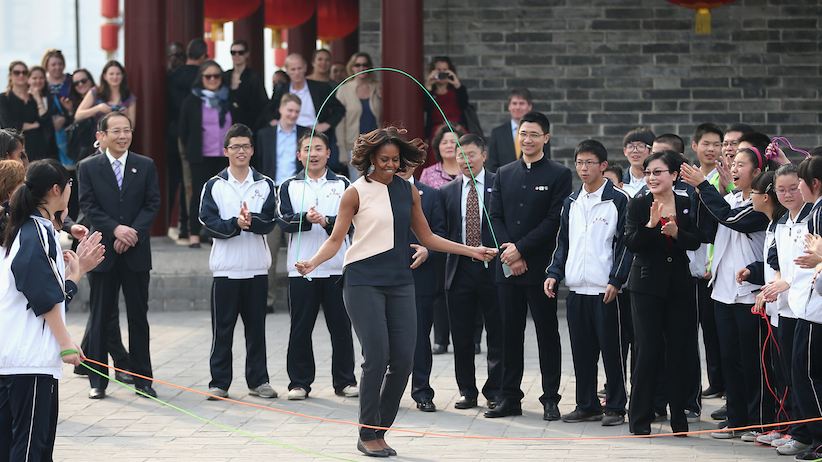 Michelle Obama, on a trip to China with daughters Malia and Sasha, showed her skipping skills in Xi’an, home to the Terracotta Army

Earl Jones
The sentencing calculations for Jones, who stole $50 million from clients over a 17-year period, are almost as creative as his bookkeeping. Jones was released from prison last week after serving four of 11 years for a Ponzi scheme that wiped out the savings of investors, most of them Montreal seniors. The Parole Board called him a low risk to reoffend and said his crimes were non-violent, “even though they did cause serious psychological harm to as [many] as 158 victims.” Frances Gordon, the widow of Jones’s brother, was bilked of $720,000. She told CBC that Jones’s life may be “more difficult” out of prison if he dares to resettle in Montreal.

Mikhail Prokhorov
Soon after the Russian billionaire bought the New Jersey Nets, he moved the team to Brooklyn. Now he plans to move the organization under the umbrella of one of his companies registered in the motherland. While Prokhorov is no supporter of President Vladimir Putin—he ran against him in the 2012 elections—this would meet the Kremlin’s request that Russian-owned companies abroad be registered locally and pay taxes in Russia. It may also reignite Prokhorov’s political ambitions. His bid to become mayor of Moscow ended when a new law barred candidates with foreign assets.

Justin Casquejo
All it took was a skinny 16-year-old to turn the vaunted security system of New York’s new World Trade Center into a $40-million joke. Casquejo wriggled through an opening in the Ground Zero fence, climbed construction scaffolding to an elevator and duped the operator into taking him to the 88th floor. He then climbed stairs to the 104th floor, slipped past a sleeping guard, reached the roof, scaled the antenna and spent two hours taking pictures. The guard was fired, the elevator operator reassigned and Casquejo faces trespass charges. He later tweeted an apology.

Tony Abbott
In an unexpected nod to Australia’s historic ties to Britain and only weeks before Prince William, Kate and baby George arrive, the country’s conservative prime minister is restoring the titles of “knight” and “dame” to the Order of Australia, some 28 years after they were scrapped. Abbott, an outspoken monarchist, says they will be awarded for “extraordinary and pre-eminent” service. The first went to the outgoing governor general, now Dame Quentin Bryce.

Kanye West and Kim Kardashian
When Vogue announced the celebrity power couple would share the April cover, critics were up in arms. But the reality TV star and rapper have some sartorial authority. Kardashian sells her own collection at Sears, though she favours designers such as Calvin Klein, while West recently unveiled his second collaboration with French brand A.P.C. West will be just the second African-American male to grace the cover. First up was basketball superstar Lebron James, who posed with model Gisele Bündchen back in 2008.