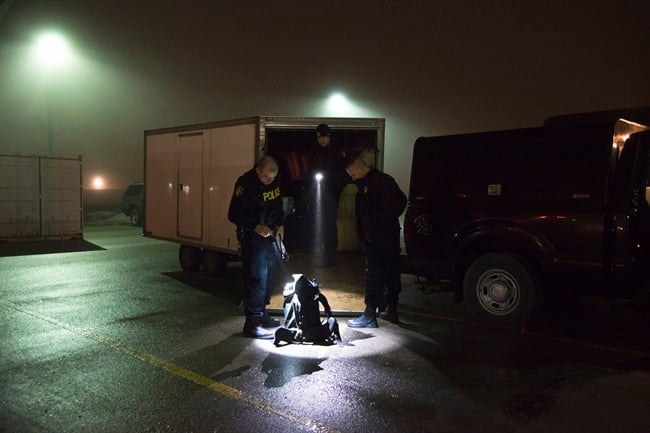 Police officers are shown at a staging area as they prepare for a raid in this undated police handout photo. THE CANADIAN PRESS/HO – Ontario Provincial Police

Hundreds of officers fanned out through parts of Ontario and Quebec as part of calculated, simultaneous raids on 22 locations on Wednesday, seizing pills containing the deadly opioid fentanyl and 23 firearms, OPP Deputy Commissioner Rick Barnum told a news conference.

“By dismantling a criminal operation of this magnitude, we’ve literally prevented more than 11,000 doses of death of fentanyl and illegal guns from killing people in our communities,” Barnum said.

The investigation began by targeting multiple criminal groups trafficking firearms and drugs along the Highway 401 corridor between the Greater Toronto Area and Montreal, he said.

Investigators then found that drugs were also being smuggled from Canada into the United States, and Drug Enforcement Agency officials in Connecticut became involved in the operation, Barnum said.

Over the course of the probe, OPP say investigators seized 11,500 pills containing fentanyl, eight kilograms of cocaine and 7.5 kilograms of ecstasy, among other drugs and drug equipment.

Barnum said the fentanyl products were being produced in Montreal and moved into Ontario. He said that was further proof fentanyl is not only being sold as an opioid, but also as a cutting agent — mostly for economic reasons.

“We have audio recordings of drug traffickers who callously admitted that the enormous profits that can be made from fentanyl far outweighs the potential overdose deaths that can come about as a result of them dealing these drugs,” Barnum said.

Fentanyl — a drug prescribed for chronic pain management — is roughly 100 times more potent than morphine and about 40 times stronger than heroin. It produces a drug high but also depresses the body’s rate of respiration, which can cause breathing to stop — a dose of just two milligrams of pure fentanyl can be lethal.

“Makeshift drug labs are increasing in number in Canada and can be found just about anywhere: in rented homes, apartment, motel rooms, rental trucks, abandoned buildings, barns and garden sheds,” he said.

Commander Paul Verrault of Montreal police said much of the seized fentanyl products originated in his city, where they charged a 38-year-old man with three counts of trafficking the drug.

From there, fentanyl would make its way into eastern Ontario and into Belleville, Ont., the Quinte area and the Toronto area.

Barnum said the drugs would be moved in all types of vehicles, some of which were seized in the raids, including a snowmobile.

Police infiltrated several criminal organizations during the investigation. A Hells Angels member was among those arrested, Barnum said.

Police also seized Canadian and U.S. currency and $50,000 worth of casino chips as part of the investigation.

OPP said the 18 people arrested in the investigation have been charged with a total of 81 offences under the Criminal Code and the Controlled Drug and Substances Act.

All are expected to appear in court in Belleville, but dates haven’t been set yet.