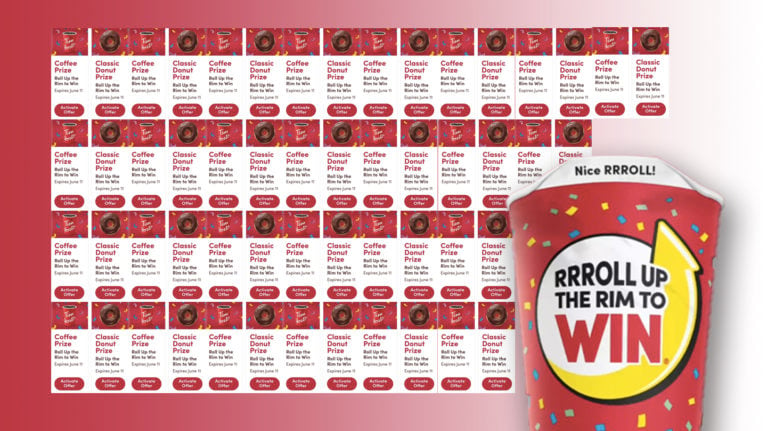 A statistics professor used his expertise in calculating probabilities to come up with a 98 winning percentage for Tim Hortons popular Roll up the Rim contest. (Photo Illustration/The Conversation)

In 2003, geological statistician Mohan Srivastava cracked a Canadian lottery game. After getting a scratch-off ticket as a gift, he spotted a flaw in the game. Putting his probability skills to work, he figured out how to identify winning tickets prior to purchase. It didn’t make him rich — “beating the game wasn’t worth my time,” he said — but Srivastava’s experience showed it’s very hard to make a truly random game.

Tim Hortons launched its annual Roll up the Rim promotion in mid-March. Due to the coronavirus pandemic, the contest’s iconic physical cups were replaced by a digital game on the company’s loyalty app. This change had major implications for how prizes were awarded. It also created an opportunity to shift the odds heavily in your favour.

READ: Tim Hortons, the Brazilian coffee chain that wants to be Canadian again

Under the old format, the mechanics of the game were simple. Tim Hortons would print millions of promotional cups and about one out of every six cups had a prize under its paper rim. If the company expected to sell 180 million coffees during the contest period, then they’d print 180 million promotional cups and make about 30 million of them winners. Stores would then sell the cups until supplies ran out.

This meant that while Tim Hortons couldn’t perfectly predict how many coffees they’d sell during the contest period, the odds remained the same. If sales were unexpectedly high, the cups would simply run out sooner. If sales were low, the game would last a little longer. Either way, the number of prizes and the number of cups given out — the numerator and denominator of our probability equation — were fixed.

This year, the digital game changed all that. Instead of physical cups, players earned “digital rolls” with their purchases. These could be rolled at any time by tapping a virtual coffee cup on the app.

Unlike the physical cups however, Tim Hortons couldn’t control how many digital rolls were given out. It depended on their actual sales during the four-week contest period. The number of prizes (the numerator) was still fixed, but the number of entries (the denominator) was out of their hands. They had to find a new way to distribute the prizes.

The solution, as I wrote about before the start of the contest, meant Roll up the Rim became a bit like a slot machine.

READ: Tim Hortons: Roll up your personal information to win

Each prize — from a coffee to a car — was assigned a “winning timeframe,” a short period of time during which it could be won. If you were the first player to tap your app during that timeframe, you won the prize. Tim Hortons could then distribute all the advertised prizes across the contest period and every single one — at least in theory — could be won.

With some of these winning timeframes as short as 0.1 seconds though, it was certainly possible some would pass with no one playing a roll. Anticipating this, Tim Hortons included a rule where any unclaimed prizes were rolled over to another day of the contest, right up until the final day. A prize would only go unclaimed if it wasn’t won by the digital roll deadline at midnight on April 21. Although the in-store contest ended April 7, players had an additional two weeks to use their digital rolls.

This new game format meant your odds of winning depended not only on how many digital rolls you earned, but also how many others were playing. If sales were low, then fewer people would play — and more of those winning timeframes would pass without the prize being claimed. Those unclaimed prizes would roll over — and keep rolling over — until the contest deadline.

We don’t know for sure because Tim Hortons hasn’t announced its sales figures during the contest, but it’s reasonable to assume that fewer coffees have been sold during the coronavirus pandemic lockdown. Lower sales could theoretically increase the odds of winning a prize through the app, but only if you knew when to play.

As a statistics professor, it seemed appropriate to conduct a small experiment. I knew there was little chance of winning a big prize — over 99 per cent of the contest’s prizes are coffee or doughnuts — but I was statistically curious.

There were other factors to consider. How randomly were the prizes distributed? Were they more likely to be won during the start of the contest? What times of day did people play? Was I more likely to win in the middle of the night? There was no way to know for sure, but I made some guesses and got to work.

An avalanche of unclaimed prizes

Taking advantage of the various ways to earn bonus rolls (such as owning a reusable cup or making a purchase through the app), I racked up 96 entries. I then waited until the very last day of the contest to play them. If my theory was correct, based on statistical models I had calculated before playing, there would be an avalanche of unclaimed prizes waiting to be won.

Waking up at 5 a.m. — I wanted to minimize the chance I was playing at the same time as someone else — I was finally ready to roll.

On my first play, I won a free coffee. A good start, but maybe I’d just gotten lucky.

With 94 wins out of 96 entries, I had a 98 per cent success rate. Before the contest, Tim Hortons estimated a player’s chances were just 1-in-9, or about 11 per cent. By finding predictable elements in a seemingly random process, I was able to dramatically shift those odds. I’ll be telling my probability students about this for years.

Like Mohan Srivastava, I knew this wasn’t a get-rich-quick scheme. Your odds of landing a big prize — even when almost every roll is a winner — are still incredibly small.

The contest rules suggest the value of my prizes if I buy the most expensive coffees and doughnuts possible is about $500. Not a bad return on investment, but I’m going to see if Tim Hortons can donate the prizes to my local hospital instead.

FILED UNDER: Editor's Picks roll up the rim Tim Hortons