Toll highways in Toronto could pave way for other cities 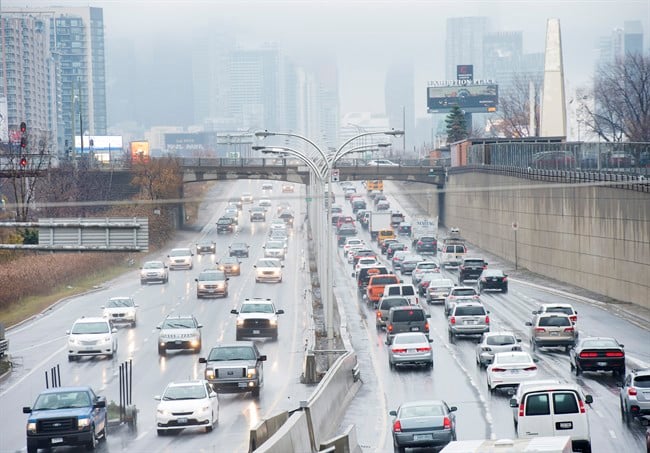 Vehicles makes there way into and out of downtown Toronto along the Gardiner Expressway in Toronto. THE CANADIAN PRESS/Nathan Denette

TORONTO – The mayor of Canada’s most populous city announced a plan Thursday to impose tolls on two major highways in and out of Toronto’s downtown core — a move experts said could pave the way for other large urban centres in the country to follow suit.

Mayor John Tory proposed tolls for everyone who uses the Don Valley Parkway and the Gardiner Expressway, saying they would provide much-needed funds for transit expansion and road repair, and ease congestion.

“I have a plan to make the most significant investment in transit and infrastructure in decades, to cut congestion and get this city moving,” Tory told an audience at the Toronto Region Board of Trade on Thursday.

“It would see us toll the Gardiner and DVP and dedicate every single penny raised to build transit and fix our roads, and by doing so make a real difference on unacceptable traffic conditions and overcrowded transit.”

While there are a number of toll roads and bridges throughout Canada — including in British Columbia, Nova Scotia and Quebec — observers said the proposed tolls in Toronto are thought to be the first in the country on expressways that cut through a major city’s downtown core.

“If Toronto successfully bites the bullet on this and shows leadership, I could certainly see Vancouver and Montreal saying, ‘well, we should look at this,'” said Eric Miller, the director of the University of Toronto’s Transportation Research Institute.

“Great cities like London and Stockholm have gone even further and tolled every route into downtown,” he added.

Related: From the Archives: Stuck in traffic

While road tolls may not be immediately popular, Miller said it’s time to have “an adult conversation” about where transportation funding comes from.

“For people who are using the system right now, it seems onerous. But roads are the only thing we use that we don’t pay for,” he said. “We just can’t afford to be doing that anymore.”

Miller also said the tolls aren’t likely to affect how many people travel into and out of downtown Toronto, as many already use transit for that purpose.

Robin Lindsey, a professor who specializes in transportation funding at the University of British Columbia, noted that there are added benefits to tolls — they could encourage more people to take transit, reducing congestion and pollution.

“Much of the pollution comes from the stop-and-go traffic you see on these highways,” he said, noting that tolls could help reduce that.

Tory said that in Toronto’s case, tolls would split the financial burden of transit funding between all those who use the Don Valley Parkway and the Gardiner Expressway, not just Toronto taxpayers. The two highways are heavily used by those who commute into Toronto for work from surrounding communities.

Tory suggested tolls of about $2 on the two thoroughfares, but later noted that was “just an example” of a possible amount. A $2 toll, he said, would raise more than $200 million annually for the city.

He proposed that the money collected through tolls would be placed in a separate fund reserved for transit expansion and road repairs. He suggested the fund be overseen by an independent body and audited annually.

The announcement received mixed reactions from the public on social media, where users alternately wrote that the tolls were overdue, and that they will put undue pressure on commuters.

Tory has also received push back from Toronto’s neighbours.

The mayor of Mississauga, Ont., just west of Toronto, said Tory needs to make sure the city uses the money that would be generated from the tolls appropriately.

“He must ensure that every penny of the money collected is reinvested into the repairs of the Gardiner and DVP, as well as into regionally-integrated transit projects,” Mayor Bonnie Crombie said in a statement.

“It’s important that Mayor Tory understand the ramifications of his actions on business and tourism. However, as Toronto owns the Gardiner and DVP, he is free to impose these tolls without input from his neighbours in the 905.”

Tory’s proposed tolls will have to go through city council and the provincial government before being put into place. Tory said the earliest the tolls could feasibly be introduced is 2019.

Steven Del Duca, Ontario’s transportation minister, said he hasn’t yet seen details of the plan, but he promised to review whatever plan the city puts forward “very carefully” before offering any approval.

The Ontario government is currently testing a pilot project that lets drivers without passengers pay to use the high occupancy vehicle lane on a section of the Queen Elizabeth Way between Oakville, Ont., and Burlington, Ont., and it plans to expand high occupancy toll lanes to other highways in the Greater Toronto Area.