Online, however, theories continue to spread that the cops don't have the right man 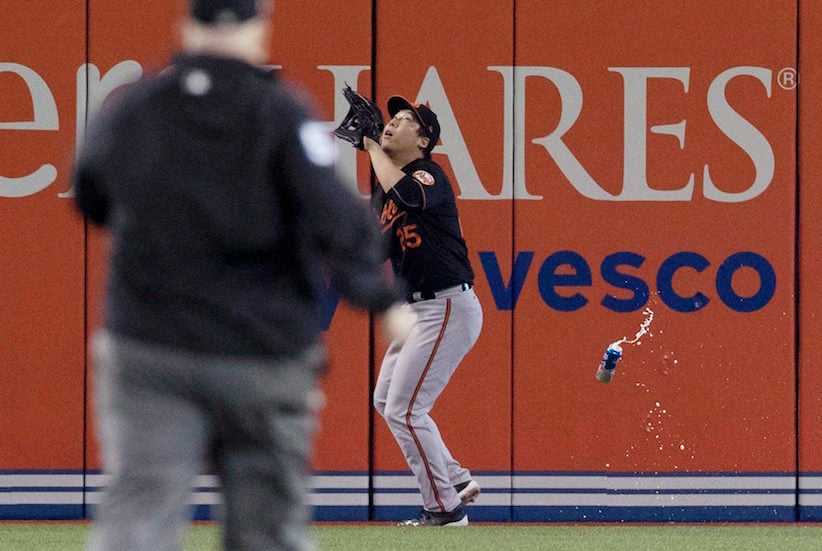 Baltimore Orioles’ Hyun Soo Kim gets under a fly ball as a beer can sails past him during seventh inning American League wild-card game action against the Toronto Blue Jays in Toronto, Tuesday, Oct. 4, 2016. THE CANADIAN PRESS/Mark Blinch

Toronto police say they are confident they’ve identified the correct person as the fan who tossed a beer can at a Baltimore outfielder during a dramatic Blue Jays playoff game, as rampant speculation raged on social media over whether they had the right man.

The incident took place on Tuesday, when a can hurled from the stands narrowly missed Baltimore Orioles player Hyun Soo Kim as he made a catch during the seventh inning of the game at the Rogers Centre.

In the confusion that ensued, Orioles player Adam Jones said he and Kim were taunted with racial slurs.

After announcing they were investigating the tallboy toss by an “unsportsmanlike fan,” police released a photograph on Wednesday evening of a man they alleged was the one who threw the can.

They did not name the man, but encouraged him to turn himself in.

“We are confident we have made a positive ID,” said Const. Jenifferjit Sidhu. “We will continue to work with Rogers Centre for further investigation.”

The incident, however, has captivated many baseball fans and online amateur detectives, sparking frame-by-frame analysis of photographs and video footage from the game.

The man in the photograph has come forward, identifying himself as Ken Pagan, an employee of Postmedia. He said he has contacted police.

But in a report published by the Toronto Sun, which is owned by Postmedia, Pagan suggested police may be wrong.

Pagan told the Toronto Sun he was “drinking out of a cup” during the game. He also said photos posted on Twitter that show him after the can was tossed clearly indicate he had a cup in his hand.

A spokeswoman with Postmedia, who confirmed Pagan was an employee with the company, said the organization was conducting an internal investigation but had “reached no conclusions.”

Online, however, theories abounded on just who was actually the tallboy tosser.

“Ken Pagan is totally innocent and this proves it,” said one person on Twitter.

“Wait it was definitely Ken Pagan. He chucks it sidearm to make it look like it came from the gap in fans,” tweeted another.

The Blue Jays apologized to the Orioles for the incident and Major League Baseball vowed to tighten security and alcohol policies at its games.