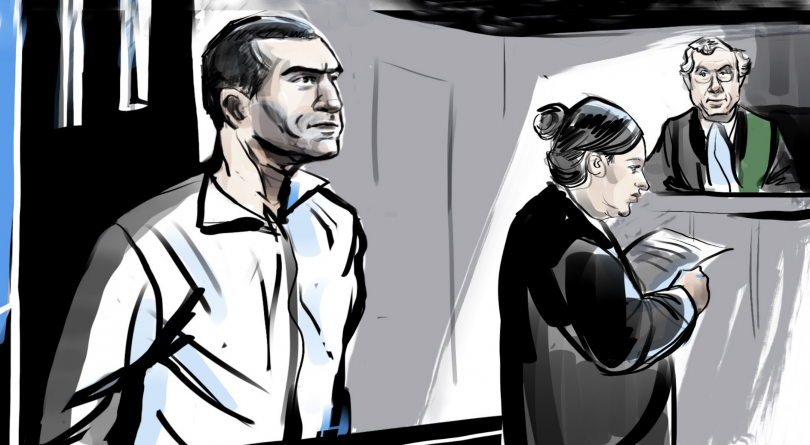 Court sketch of Alek Minassian who appeared in court to face 10 charges of first-degree murder and 13 charges of attempted murder on April 24, 2018. CITYNEWS/Marianne Boucher

Moments before allegedly doing the unfathomable, 25-year-old Alek Minassian did something quite common.

But the cryptic message he posted shortly before allegedly embarking on a deadly van attack that killed 10 and injured 14 was anything but commonplace and, for now, it provides one of the only glimpses we have into his mind state. Screenshot of the Toronto van suspect’s Facebook post that was posted shortly before the attack that left 10 people dead.

In the posting, Minassian wrote that the “Incel Rebellion has already begun!” He also references the social media site 4chan and praises the 2014 Isla Vista mass killer, writing “All hail the Supreme Gentlemen Elliot Rodger!”

“As has been reported in the media, the accused is alleged to have posted a cryptic message on Facebook minutes before he started driving the rented van and he drove it southbound on Yonge Street and onto the crowded sidewalks,” Gibson said.

But what is Incel and what is the significance of the social media posting?

‘Incel’ is short for ‘involuntarily celibate’

According to University of Toronto Sociology professor Judith Taylor, Incel was a group started by a young Canadian woman in 1993 for people who struggled to find acceptance in their social lives and often found themselves “involuntarily celibate.”

The term would soon be appropriated by groups of disaffected, young white males who often vented their frustrations on online forums.

“It is mostly young white men between the ages of 19 and 30,” she adds. “This is a population that is anticipating a particular kind of social standing that real life isn’t offering them and they are looking for things to blame. These are also young men that have felt themselves victims of bullying and who haven’t reached the kind of success or popularity that they had hoped for.”

MORE: What we know about Alek Minassian–Alleged Toronto van attacker

Rodgers killed six people and injured fourteen during a 2014 shooting and stabbing rampage near the campus of the University of California. He later killed himself in his vehicle.

Rodgers released a lengthy manifesto that outlined years of frustration with his personal life and countless rejections at the hands of the opposite sex.

Without knowing him personally, Taylor says Minassian may have shared similar frustrations.

“Our suspect seemed to have been a drifter, he spent a tremendous amount of time in college without completion of a degree, started some apps, unsuccessfully started work with the military and then left it. So this is a person that appears to seem socially dislocated.”

WATCH: ‘The cop who didn’t shoot’

“Many people who are part of Incel have money, have resources, have parents who are supportive, have education and access to education, so these aren’t disenfranchised people but these are people who believe they should be more socially successful than they are.”

Taylor says it’s up to society, and social media sites, to pay attention to the warning signs.

“Who around him saw this flailing? Who around him knew how much time he was spending on the internet in these groups? What professors, what employers, what siblings? These are the questions that we as a society have to start asking ourselves.”

“We really need to pay attention to these cries for help and these threats and to think about them in much more serious terms.”