Toronto van attack: How Canadians can help in the aftermath 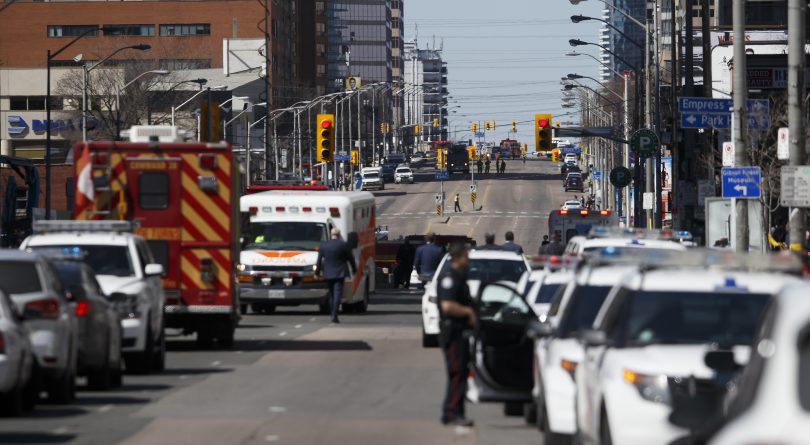 TORONTO, ON - APRIL 23: Law enforcement and first responders on scene at Yonge St. at Finch Ave. after a van plows into pedestrians April 23, 2018 in Toronto, Ontario, Canada. A suspect is in custody after a white van collided with multiple pedestrians. (Photo by Cole Burston/Getty Images)

A rental van rampaged down Yonge Street near Finch in north Toronto this week, leaving 10 dead and 15 injured in its one-kilometre path. The police have arrested 25-year-old Richmond Hill resident Alek Minassian in connection to the incident. He has been charged with 10 counts of first-degree murder and 13 counts of attempted murder.

There has been an outpouring of grief and support in response to the horrific attack on social media, with many wondering what more they can do to help. Here are some of the ways Canadians can assist:

If you have information that may help inform the events in North York, you can call the hotline that Toronto Police set up for witnesses at 416-808-8750. Anonymous tips can also be left by calling Crime Stoppers at 1-800-222-8477.

There were many photos and videos that surfaced from the scene of the incident. If you were in the area and took photos or videos you’d like to share with the police to help the investigation, you can do so here.

You can also donate blood to help. Canadian Blood Services said in a tweet that “Regular donations throughout the year enable us to respond to an emergency immediately. If you would like to donate blood as a way to help during this time, please visit blood.ca to book an appointment.”

There are several GoFundMe campaigns that have launched in response to the incident in North York but one started by Canada Zakat seems to be gaining the most traction. You can donate here. The campaign has already raised approximately $50,000 of its $1 million goal that will go towards helping with the victims’ funeral expenses. Canada Zakat says that it “helped raise and distribute over $800,000 to the victims and their families of last year’s mosque shooting in Quebec.”

Islamic Relief Canada has also launched a fundraising campaign on Launch Good, which has raised around $2,500 of its $100,000 goal. According to the campaign page, all funds will be distributed to the families of those affected. You can donate here.

A GoFundMe campaign was started by a charity for single mother and van attack victim Renuka Amarasinghe’s 7-year-old son. The campaign is collecting money to help support the future and education of her son. The campaign had already raised more than $200,000 in one day, exceeding its $150,000 goal. You can donate here.