Following a day when confusion reigned, TPP trade ministers agree to key changes that appear to move talks closer to a deal 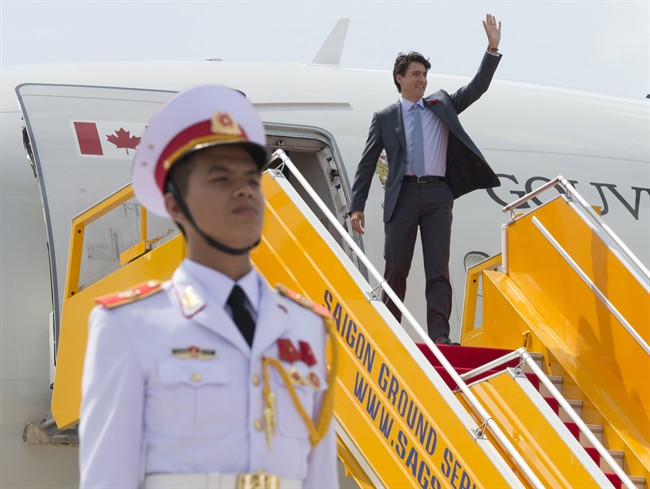 DANANG, Vietnam – An agreement in principle on the Trans-Pacific Partnership appeared to inch closer to reality late Friday after a frenetic, confusing day of talks and media reports that bluntly blamed Canada and Prime Minister Justin Trudeau for helping to scuttle a scheduled meeting of leaders to discuss the Pacific Rim trade pact.

International Trade Minister Francois-Philippe Champagne summoned journalists just before midnight to say that the TPP trade ministers had agreed to a number of key changes that moved the talks closer to a deal. Canada is better off because of the new developments, Champagne said.

“We don’t settle for just any deal,” Champagne said, acknowledging Trudeau’s decidedly downbeat comments from a day earlier. “If it takes one more day, so be it.”

He said the TPP countries agreed to suspend controversial provisions from the original TPP deal related to intellectual property. Leaders in Canada’s tech sector have long pressed Ottawa to have those elements removed from the deal.

Champagne also said the partners established a framework to deal with rules of origin issues related to the auto sector and on how the countries will proceed with including cultural exemptions into the treaty.

The parties also agreed, he added, to enhance elements in the pact related to the environment and are much closer to stronger protections of labour rights.

The news capped a hectic day of developments that made it difficult to nail down just how well the talks were going.

On Thursday, Trudeau signalled Canada was in no hurry to sign on to a deal, notwithstanding media reports based on comments from Japan’s economy minister that said the parties were on the verge of an agreement in principle.

The next day, Trudeau failed to appear as scheduled for a meeting of the 11 TPP countries on the sidelines of the Asia-Pacific Economic Co-operation leaders’ summit – a meeting that was subsequently cancelled by the co-chair, Japanese Prime Minister Shinzo Abe.

He missed the meeting, Champagne explained, because an important bilateral meeting with Abe ran about 25 minutes longer than expected. Trudeau’s office said Abe, co-chair of the leaders’ meeting, cancelled the event after his 50-minute discussion with Trudeau.

“It is as simple as the (Abe) meeting took longer than expected,” Champagne said. “APEC is 21 world leaders in the room – things are fluid.”

Canada was not the only country to raise concerns about the deal.

“There are a few countries who continue to have some important issues that they would like to be addressed,” Foreign Affairs Minister Chrystia Freeland said when asked about the allegations that Canada is holding up the TPP.

A report in Australia’s Sydney Morning Herald said Trudeau “sabotaged” the talks at the last minute by failing to show up for the meeting. The New Zealand Herald reported that Trudeau’s “no-show” had delayed TPP talks indefinitely. Ottawa is still at the TPP table and doesn’t want to rush such a complex deal, Freeland said.

Canada’s resistance to the new TPP does not come out entirely of the blue.

Over the past week as talk of some kind of deal grew louder, senior officials and Trudeau alike talked about wanting to roll back concessions made during the broader TPP talks when the United States was still involved. In particular, they pointed to a need for stronger protections for Canadian culture, supply management and intellectual property.

At the same time, Canada has been pushing to add new elements to the revised TPP, including provisions for gender, environment and labour.

The 11 remaining TPP countries have been working to revive the deal, which was abandoned earlier this year by U.S. President Donald Trump.

A senior government official says Japan has been one of the countries applying pressure on Canada to come to an agreement on an updated TPP.

Trudeau’s lengthy bilateral discussion with Abe, meanwhile, appeared to get off to a chilly start.

After they greeted each other inside their meeting room, Trudeau and Abe stood side by side and smiled for the news cameras. But they only clasped hands after someone in the room said: “Shake hands, please.”

Canada and Japan, the two largest economies at the TPP talks, appeared to have different expectations ahead of Friday’s scheduled negotiations.