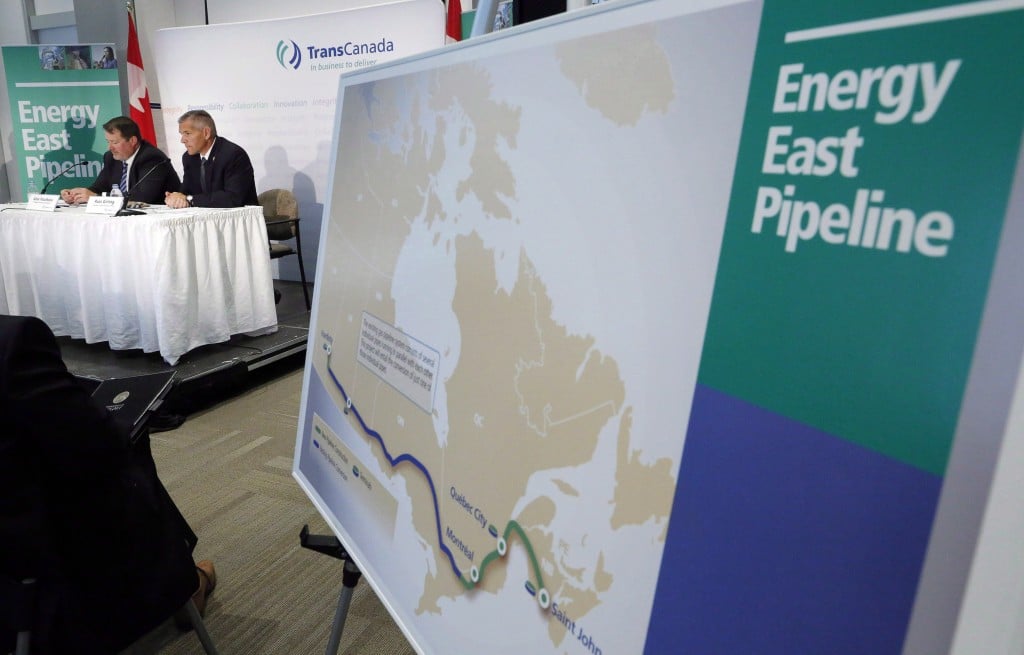 The Energy East pipeline proposed route is pictured as TransCanada officials speak during a news conference in Calgary, on Aug. 1, 2013. A new report being released by environmental groups questions whether the proposed Energy East pipeline is necessary to supplant Eastern Canada’s oil imports from the foreign suppliers frequently mentioned by TransCanada Corp. THE CANADIAN PRESS/Jeff McIntosh

MONTREAL – On a recent visit to Montreal, the head of Energy East was all smiles as he spoke about how his company is listening to Quebecers’ concerns about the deeply divisive pipeline project.

If John Soini listens carefully, however, what he hears might make him frown.

The company behind Energy East, TransCanada (TSX:TRP), says it is confident it can address worries about spills, explosions and the perceived lack of economic benefits for communities along the proposed pipeline route from Alberta to New Brunswick.

What TransCanada might have a more difficult time dealing with are two Quebec-specific obstacles that stand in the way of the project getting approval in the province.

First, Quebec has positioned itself as a global leader on climate change, which has given its federalist premier the opportunity to show Quebecers the province can shine internationally while remaining in Canada.

“We are seeing the emergence of a nationalist dimension to this and I have the data to support it,” said Erick Lachapelle, a professor at Universite de Montreal who researches public opinion on energy projects.

“This ‘chez nous’ discourse is a highly effective, powerful slogan that appeals to Quebec values of solidarity and identity, regardless of where one stands on the sovereignty question,” Lachapelle said.

The Quebec government markets its goal of reducing provincial emissions by 37.5 per cent below 1990 levels by 2030 as “the most ambitious greenhouse gas reduction target in Canada.”

Quebec’s emissions have been declining since 2005, largely due to its reliance on hydroelectricity, a renewable resource.

At the December conference on climate change in Paris, Premier Philippe Couillard boasted that “never before has Quebec been this present, this influential at an international conference. It’s clear that Quebec is now recognized as a high-level player _ of international calibre _ on the issue of climate change.”

Lachapelle says Couillard’s statements, including the premier’s recent announcement he was against all energy exploration on Anticosti Island in the St. Lawrence, “would suggest he would be reluctant to support the (Energy East) pipeline.

“But that is assuming the government wants to be consistent,” he said. “And that’s a big assumption.”

Energy East, which would see 1.1 million barrels of western oil shipped daily to refineries in Eastern Canada, is in a review phase and neither Quebec nor the federal government has taken a position on the project.

Chris Bloomer, president and CEO of the Canadian Energy Pipeline Association, says his organization’s internal polling indicates climate change is way down the list of concerns related to pipeline opposition in Canada, including in Quebec.

“People are more concerned with the safety and integrity of the pipeline,” he said.

Market forecasts suggest the world’s energy demands will continue to grow, he said. “And we should have the ability to access all markets for our resources and utilize that for the good of all Canadians.”

But the business case for more oil doesn’t answer the thorny question: How does Canada build a new pipeline and meet its emissions targets?

Canada’s currents climate goals are to reduce emissions by 30 per cent by 2030 when compared with 2005 levels.

If Energy East gets the go-ahead from the federal government and Alberta’s oilsands continue to develop, the country will need to find emission cuts in other areas of the economy.

Steven Guilbeault of Equiterre, a Montreal-based environmental group. says the math doesn’t add up for Canada to stay true to its international commitments and give the green light to Energy East.

He said his organization has calculated that if the pipeline goes ahead, the oilsands would represent roughly two-thirds of Canada’s allowable emissions under the targets.

“That would leave one-third space left for the rest of the economy,” he said. “I can’t see how this would fly. I can’t see that happening.”