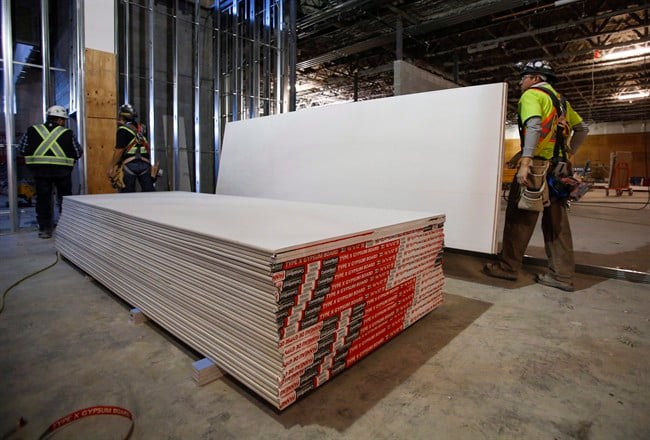 In its decision, the tribunal found that American-made drywall dumped at less than normal prices into Western Canada over the past few years have injured the Canadian industry.

The ruling means that preliminary duties of up to 276 per cent imposed by the Canada Border Services Agency on imports from the U.S. last September will end, but will be replaced by permanent variable duties on any imports that fall below a floor price established last month.

“In terms of competitiveness, of course we want Canada to be at the top of its ability and, if this assists that, that would be fine, except that we get hurt in the process,” said Fort McMurray Mayor Melissa Blake.

“It means that people who have lost their homes or had extensive damage that need to do a replacement on things like drywall will be suffering with a couple of thousand extra dollars (in costs).”

She repeated her call for the federal government to offer grants to offset the impact of the drywall duties, noting that low oil prices have hurt the Fort McMurray economy and resulted in many layoffs in the city.

The duties were imposed after a dumping complaint by French-owned CertainTeed Gypsum Canada, the last drywall manufacturer in Western Canada with plants in Vancouver, Calgary and Winnipeg, and at two gypsum quarries, one in B.C. and one in Manitoba.

The company didn’t respond to a request for comment Wednesday but Canadian manager Matt Walker has said previously that its plants and quarries could be closed, at the cost of 200 jobs, if the dumping of U.S. products for as little as half of the price south of the border continues.

It says it has hired 30 new employees since the duties were imposed.

Neal Pollock, spokesman for the Western Canada Alliance of Wall and Ceiling Contractors, said Wednesday they were hoping for “zero duties.”

In a separate report also released Wednesday, the tribunal found that preliminary duties have been “substantially reducing competition” in Western Canada to the detriment of Canada’s economic interests and consumers of drywall.

On Thursday, Pollock said his group applauds the tribunal’s conclusion that the imposition of duties caused “significant harm” to consumers.

“The recommendations presented by the tribunal go a significant way to alleviating this harm,” Pollock said in a statement.

“The Alliance is supportive of the tribunal’s recommendation for a refund mechanism to reimburse purchasers for the higher costs of gypsum board incurred during the provisional period. The recommendation that final duties be temporarily eliminated for a six-month period is helpful, but is not long enough to allow contractors to perform their fixed price contracts going forward. The Alliance will be seeking a longer period of temporary elimination without a volume cap.”

He said contractors report increases in drywall prices of between 30 per cent in Alberta and 55 per cent in B.C., costs they have had to absorb under contracts signed before the duties began.

David Lessard, vice-president of DCL Drywall of Edmonton, said his company was paying $286 per thousand square feet for half-inch thick drywall before duties were imposed and is now paying $370 for the same product from the same supplier. A four-by-12-foot sheet that would have cost $13.73, therefore, now costs $17.76, a difference of $4.03.

Finance Minister Bill Morneau requested the accelerated report in October out of concern for the impact of higher prices on consumers, particularly in Fort McMurray, which lost 1,800 single-family homes and dozens of other structures in last spring’s devastating wildfire.

Department spokesman Jack Aubry said last week the minister will review the tribunal’s decision reasons and recommendations, expected to be published Jan. 19, before determining its next steps. He wouldn’t say what options are being considered.

Note to readers: This is a corrected story. A previous version said the Western Canada Alliance of Wall and Ceiling Contractors was disappointed with the tribunal’s ruling.