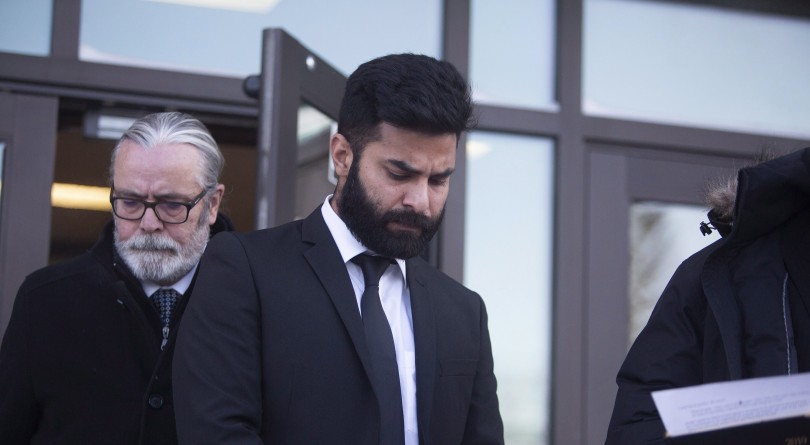 Jaskirat Singh Sidhu leaves provincial court in Melfort, Sask., Tuesday, January, 8, 2019. Sidhu, the driver of a transport truck involved in a deadly crash with the Humboldt Broncos junior hockey team's bus, has pleaded guilty to all charges against him. (Kayle Neis/CP)

MELFORT, Sask. — The driver of a transport truck involved in a deadly crash with the Humboldt Broncos junior hockey team’s bus has pleaded guilty to all charges against him.

Jaskirat Singh Sidhu appeared in a court in Melfort, Sask., on Tuesday.

Sixteen people lost their lives and 13 players were injured when Sidhu’s semi-unit loaded with peat moss and the Broncos bus collided in rural Saskatchewan last April.

The Broncos were on their way to a playoff game in the Saskatchewan Junior Hockey League when their bus and Sidhu’s rig collided not far from Tisdale, Sask.

“I plead guilty, your honour,” said Sidhu, who was wearing a black suit with white dress shirt and tie.

The Crown said it might need up to five days for sentencing. The case was adjourned until Jan. 28.

Sidhu’s lawyer, Mark Brayford, said more evidence is still to be handed over to the defence, but his client wanted to plead guilty to avoid further delay.

The bus was travelling north on Highway 35 and the semi was westbound on Highway 335, which has a stop sign.

A safety review of the rural crossroads done by a consulting firm for the Saskatchewan government was released last month. It said sight lines are a safety concern at the spot.

A stand of trees, mostly on private property, obstructs the view of drivers approaching from the south and east — the same directions the bus and semi-trailer were coming from when they collided, the review said.

It recommended negotiating with the landowner to remove the trees, and also suggested rumble strips, larger signs and painting “Stop” and “Stop Ahead” on the road.

RELATED: ‘It was the last time we saw him’: an oral history of the Humboldt tragedy

The report’s authors determined that six collisions had taken place at the intersection between 1990 and 2017 and another 14 happened on roads nearby.

One of those collisions was deadly. In 1997, six people were killed when a pickup truck heading east failed to stop on Highway 335 and was hit by a southbound tractor-trailer.

The Saskatchewan government further introduced in December mandatory training for semi-truck drivers. Starting in March, drivers seeking a Class 1 commercial licence are to undergo at least 121.5 hours of training.

The owner of the Calgary trucking company that hired Singh was also charged after the crash.