Trudeau and Varadkar reaffirm commitment to CETA at Dublin meeting 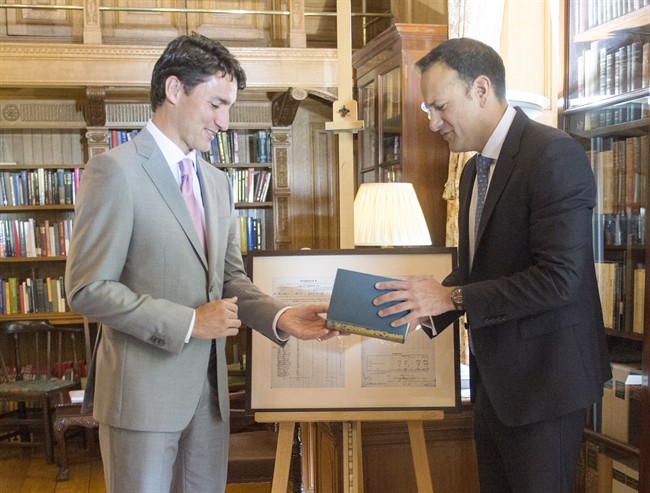 DUBLIN – Prime Minister Justin Trudeau and his Irish counterpart reaffirmed their commitment to the Canada-EU trade pact known as CETA during their meeting Tuesday in Dublin.

Speaking to reporters following their meeting, both Trudeau and Taoiseach Leo Varadkar sang the praises of CETA as a commitment to free trade and a pact which will benefit both sides.

Trudeau reiterated his theme that CETA will deliver stronger economic growth and create more well-paid jobs on both sides of the Atlantic.

“CETA will give Canadian and Irish businesses greater access to each other’s markets,” Trudeau said. “It will deliver stronger economic growth, the kind of growth that benefits all citizens, not just the wealthiest.”

“Most important, it will create more good, well-paying jobs for workers on both sides of the Atlantic,” Trudeau said.

Varadkar said while Canada is very large and Ireland is small, both countries have many similarities, notably by having large neighbours “going in different directions for the time being” – referring to the U.S. protectionist path and Britain’s divorce talks with the EU.

Both also touted their views about inclusiveness.

“Canadians and Irish alike understand that it is not enough to tolerate our neighbours, we need to embrace the things that make each of us unique whether it’s our gender, the language we speak at home, where we worship or whom we love,” Trudeau said.

Trudeau and Varadkar also spoke of their commitment to climate change, diversity and the need for greater gender balance in governments.

Varadkar joked that he received good advice from Trudeau during their meeting since he’s been in office about 18 days while Trudeau has held office for about 18 months. Trudeau is the Irish leader’s first international visitor and this was their first face-to-face meeting.

Trudeau will later head to Scotland to meet with Queen Elizabeth before going to Hamburg, Germany for the G20 summit. That gathering on Friday is shaping up as a showdown between German Chancellor Angela Merkel and U.S. President Donald Trump over the issues of isolationism and protectionism.