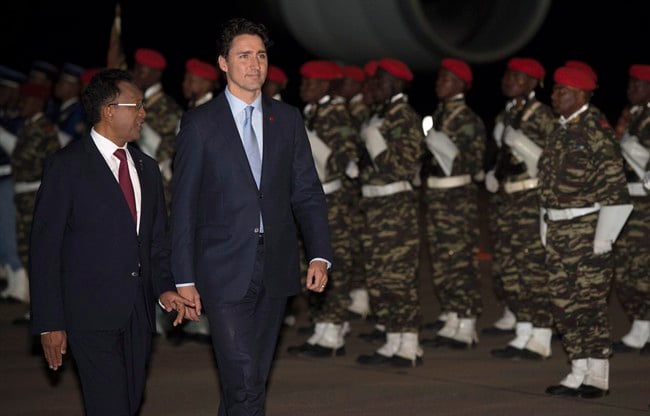 Canadian Prime Minister Justin Trudeau is greeted by President of Madagascar Hery Rajaonarimampianina as he arrives in Antananarivo, Madagascar, on Friday, November 25, 2016. THE CANADIAN PRESS/Adrian Wyld

ANTANANARIVO, Madagascar – Justin Trudeau didn’t shy away from controversial topics as he spoke at the opening ceremonies of the International Organization of la Francophonie summit in Antananarivo, Madagascar.

The prime minister said that when among friends, one should be able to speak the truth, and he had some frank things to say Saturday about human rights.

“Members of the lesbian, gay, bisexual and transgender communities suffer in too many countries, including certain members of la Francophonie who are here today,” Trudeau said.

“We owe them the same respect, the same rights and the same dignity as all other members of our society.”

The global group of 80 governments and states from mainly French-speaking nations includes nearly a dozen in Africa where sexual acts between same-sex couples are illegal.

In some others, including the host country of Madagascar, homosexuality is frowned upon or otherwise not tolerated.

The prime minister’s remarks drew sustained applause from the room.

Trudeau also said it was important for everyone – including men – to champion the empowerment of women and girls, which is at the heart of the international development strategy the Liberal government is showcasing at the summit.

He said that for women to succeed, they should enjoy freedom from violence, “the right to free choice in sexual and reproductive health,” equality and the ability to participate fully in society.

Trudeau lamented that these rights are too often flouted. “Women and girls are victims of physical and sexual violence,” he said.

“They are married, often in infancy, without their consent. They do not have access to abortion in a free and safe manner. They are subjected to genital mutilation.”

The prime minister said “There no longer exists any excuse for such practices, for such violations of their fundamental rights.”

Trudeau also spoke of the need to fight radicalization and violent extremism, a theme that was raised by others, including French President Francois Hollande, who noted many la Francophonie members, including France, have been targets of terrorism.

Trudeau said the marginalization of youth breeds radicalization, and he urged la Francophonie to put prevention strategies in place.

“This includes the creation of a society where diversity is celebrated and where we maintain an ongoing dialogue with members of minority communities,” he said.

He also urged countries to do more to offer youth professional training so they can find jobs, contribute to society and not be as vulnerable to radicalization.

Trudeau said current leaders should guarantee the youth of today _ and generations to come _ a healthy environment by giving them the tools they need to fight pollution and climate change, and in particular by implementing the Paris Accord.