Speaking to reporters in Manila after a summit of Southeast Asian countries, Trudeau says he told Duterte about the need for the rule of law in the Philippines.

He says he also offered Canada’s support, as a friend, to help the Philippines move forward.

Trudeau says Duterte was receptive to his comments during what he describes as a very cordial and positive exchange.

The prime minister met briefly with Duterte before he delivered a speech to members of the Association of Southeast Asian Nations in a bid for Canada to eventually join its exclusive, influential circles that focus on security in the Asia-Pacific.

For several years, Canada has been working to forge closer ties with ASEAN, including its East Asia Summit security grouping that includes leaders of the U.S., China and Russia.

The Canadian government asked the Philippines for an invitation to ASEAN and a working luncheon before this year’s East Asia Summit. It’s unclear how long it will take Canada to obtain a more-permanent status within ASEAN.

Even though Duterte helped Canada get a seat at a table, Trudeau said he still brought up concerns with the Philippine president.

“As I mentioned to President Duterte, we’re concerned with human rights, with the extrajudicial killings,” Trudeau said at a news conference that closed his eight-day trip to the Philippines and Vietnam.

“Countries around the world know that when you engage with Canada you will hear about human-rights concerns and we are the first to mention that we are not perfect, either.” 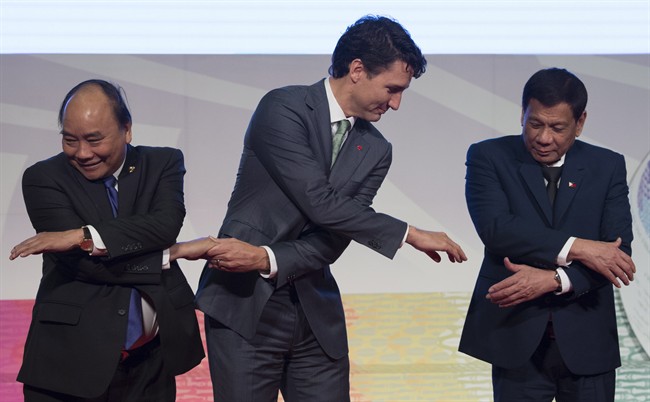