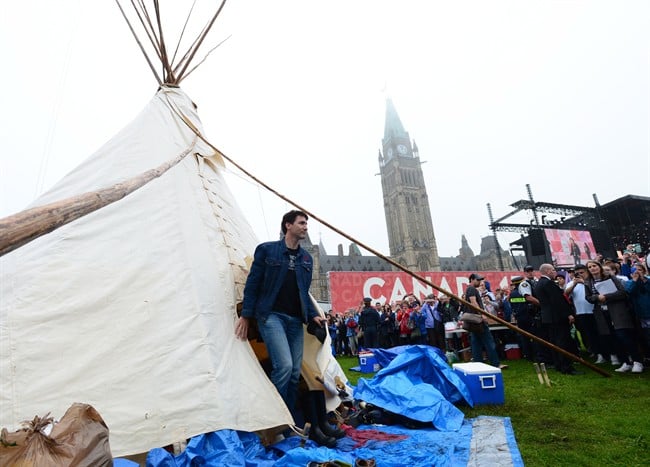 OTTAWA – Prime Minister Justin Trudeau had a brief meeting this morning with indigenous activists who have set up a demonstration teepee on Parliament Hill ahead of Canada Day celebrations.

The prime minister and his wife arrived as downtown Ottawa was abuzz with preparations for the July 1 event, expected to bring around half a million people into the downtown core.

The Bawaating Water Protectors from Sault Ste. Marie, Ont., had arrived Wednesday night to erect the teepee and engage in what they are calling a “reoccupation” to draw attention to the history of indigenous people in Canada during 150th birthday celebrations this weekend.

Originally the group clashed with police, who arrested nine people and refused to allow the teepee, but all nine were released and the structure was set up close to the main stage.

Trudeau said Thursday that the position of the protesters is understandable, and he expected there to be a balance between security for Canada Day and respect for demonstrations.

Many streets around Parliament Hill are now closed and massive concrete barricades have been set up blockading access routes; a security sweep this morning included officers looking into and under the decorative planters which line the roads.