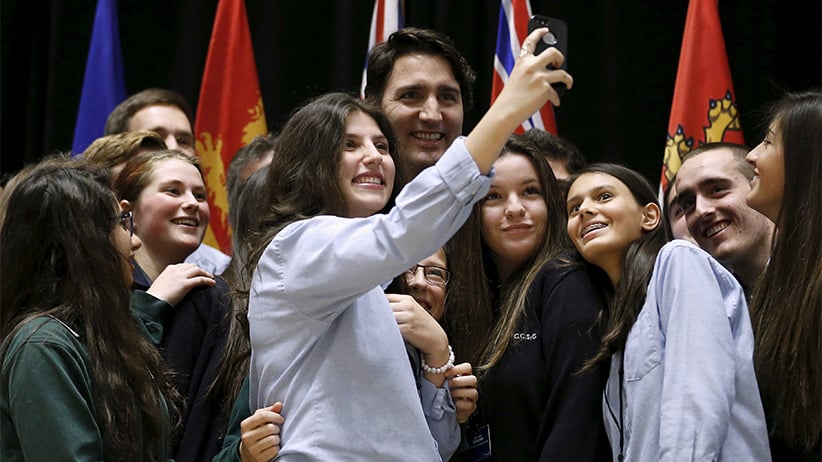 Justin Trudeau (C) poses for a selfie with students during the First Ministers’ meeting in Ottawa, Canada November 23, 2015. (Chris Wattie/Reuters)

It was bound to happen sooner or later.

Ever since his election as Canada’s Prime Minister last October, Justin Trudeau has revelled in global tributes, raves and swoons. He’s the Disney prince with the trippy dance moves, the groovy Haida tattoo and the gender-balanced cabinet. He’s the last best hope for globalization, the star attraction at the Pride parades, the hero of the Paris Climate Summit, the guy everyone wants a selfie with.

Trudeau made himself synonymous with Canada. He made Canada cool again. It was fun while it lasted.

By the early hours of Saturday morning, Havana time, Trudeau was an international laughingstock. Canada’s “brand,” so carefully constructed in Vogue photo essays and Economist magazine cover features, seemed to suddenly implode into a bonspiel of the vanities, with humiliating headlines streaming from the Washington Post to the Guardian, and from Huffington Post to USA Today.

It was Trudeau’s maudlin panegyric on the death of Fidel Castro that kicked it off, and there is a strangely operatic quality to the sequence of events that brings us to this juncture. When Trudeau made his public debut in fashionable society 16 years ago, with his “Je t’aime, papa!” encomium at the gala funeral of his father in Montreal, Fidel Castro himself was there among the celebrities, as an honorary pallbearer, lending a kind of radical frisson to the event. Now it’s all come full circle.

Times have changed, and the Trudeau family’s bonds with the Castro family, first cultivated while Pierre Trudeau was prime minister and carefully nurtured during the years that followed, now seem somehow unhygienic. Greasy, even. Definitely not cool.

“It is with deep sorrow that I learned today of the death of Cuba’s longest-serving president,” Trudeau’s statement begins, going on to celebrate Castro as a “larger than life” personality who served his people. He was “a legendary revolutionary and orator” whose people loved him, and who worked wonders for Cuban education and health care.

A “controversial figure,” sure, but: “I know my father was very proud to call him a friend and I had the opportunity to meet Fidel when my father passed away. It was also a real honour to meet his three sons and his brother, President Raúl Castro, during my recent visit to Cuba. On behalf of all Canadians, Sophie and I offer our deepest condolences to the family, friends and many, many supporters of Mr. Castro. We join the people of Cuba today in mourning the loss of this remarkable leader.”

And so, from far-off Antananarivo, Madagascar, where he was attending the 80-government gathering of La Francophonie, Trudeau’s lament for the last of the Cold War dictators ended up confirming every wicked caricature of his own vacuity and every lampoon of the Trudeau government’s foreign-policy lack of seriousness.

Twitter lit up with hilarious mockeries under the hashtag #trudeaueulogies. Florida Sen. Marco Rubio wanted to know whether Trudeau’s statement came from a parody account. The impeccably liberal Jeffrey Goldberg, editor-in-chief of The Atlantic magazine, called Trudeau’s praise of Castro “a sad statement for the leader of a democracy to make.”

Whether or not Trudeau saw any of this coming, he didn’t appear to notice that he was delivering a speech to La Francophonie delegates in Madagascar that emphasized justice for lesbian, gay and transgender people, while from the other side of his mouth he was praising the legacy of a caudillo who spent the first decade of his rule rounding up gay people for “re-education” in labour camps. Homosexuals were irredeemably bourgeois maricones and agents of imperialism, Castro once explained.

To be perfectly fair, Trudeau did allow that Castro was a “controversial figure,” and nothing in his remarks was as explicit as the minor classic in the genre of dictator-worship that his brother Alexandre composed for the Toronto Star 10 years ago. Alexandre described Castro as “something of a superman. . . an expert on genetics, on automobile combustion engines, on stock markets. On everything.” As for the Cuban people: “They do occasionally complain, often as an adolescent might complain about a too strict and demanding father.”

This kind of Disco Generation stupidity about Castro has been commonplace in establishment circles in Canada since Pierre’s time, and neither Alexandre’s gringo-splaining nor Justin’s aptitude for eulogy are sufficient to gloss over the many things Cubans have every right to complain about.

Any political activity outside the Communist Party of Cuba is a criminal offence. Political dissent of any kind is a criminal offence. Dissidents are spied on, harassed and roughed up by the Castros’ neighbourhood vigilante committees. Freedom of movement is non-existent. Last year, the Cuban Commission for Human Rights and National Reconciliation (CCDHRN) documented 8,616 cases of politically motivated arbitrary arrest. For all our Prime Minister’s accolades about Cuba’s health care system, basic medicines are scarce to non-existent. For all the claims about high literacy rates, Cubans are allowed to read only what the Castro crime family allows.

Raul Castro’s son Alejandro is the regime’s intelligence chief. His son-in-law, Luis Alberto Rodríguez López-Callejas, runs the Cuban military’s business operations, which now account for 60 per cent of the Cuban economy. The Castro regime owns and control the Cuban news media, which is adept at keeping Cubans in the dark. It wasn’t until 1999, for instance, that Cubans were permitted to know the details of Fidel’s family life: five sons they’d never heard of, all in their thirties.

Independent publications are classified as “enemy propaganda.” Citizen journalists are harassed and persecuted as American spies. Reporters Without Borders ranks Cuba at 171 out of 180 countries in press freedom, worse than Iran, worse than Saudi Arabia, worse than Zimbabwe.

So fine, let’s overlook the 5,600 Cubans Fidel Castro executed by firing squad, the 1,200 known to have been liquidated in extrajudicial murders, the tens of thousands dispatched to forced labour camps, or the fifth of the Cuban population that was either driven into the sea or fled the country in terror.

What is not so easy to overlook is that Fidel and Raúl Castro reneged on their promise of a return to constitutional democracy and early elections following the overthrow of the tyrant Fulgencio Batista. The Castros betrayed the revolutionary democrats and patriots who poured into Havana with them on that glorious January day in 1959. The Castros waged war on them in the Escambray Mountains until their final defeat in 1965, four full years after John F. Kennedy’s half-baked Bay of Pigs invasion in 1961.

After he solidified his base in Cuba’s Stalinist party–which had been allied with Batista, Castro’s apologists tend to conveniently forget, until the final months of 1958–Fidel Castro delivered Cuba to Moscow as a Soviet satrapy. He then pushed Russia to the brink of nuclear war with the United States in the terrifying 13-day Missile Crisis of 1962.

For all the parochial Canadian susceptibility to the propaganda myth that pits a shabby-bearded rebel in olive fatigues against the imperialist American hegemon, by the time he died on Friday night Castro was one of the richest men in Latin America. Ten years ago, when he was handing the presidency to Raúl, Forbes magazine calculated that Fidel’s personal wealth was already nearly a billion dollars.

In his twilight years, Castro was enjoying himself at his gaudy 30-hectare Punto Cero estate in Havana’s suburban Jaimanitas district, or occasionally retreating to his private yacht, or to his beachside house in Cayo Piedra, or to his house at La Caleta del Rosario with its private marina, or to his duck-hunting chalet at La Deseada.

Fidel Castro was not merely the “controversial figure” of Justin Trudeau’s encomium. He was first and foremost a traitor to the Cuban revolution. On that count alone, Castro’s death should not be mourned. It should be celebrated, loudly and happily.