What now for the Trans-Pacific Partnership? 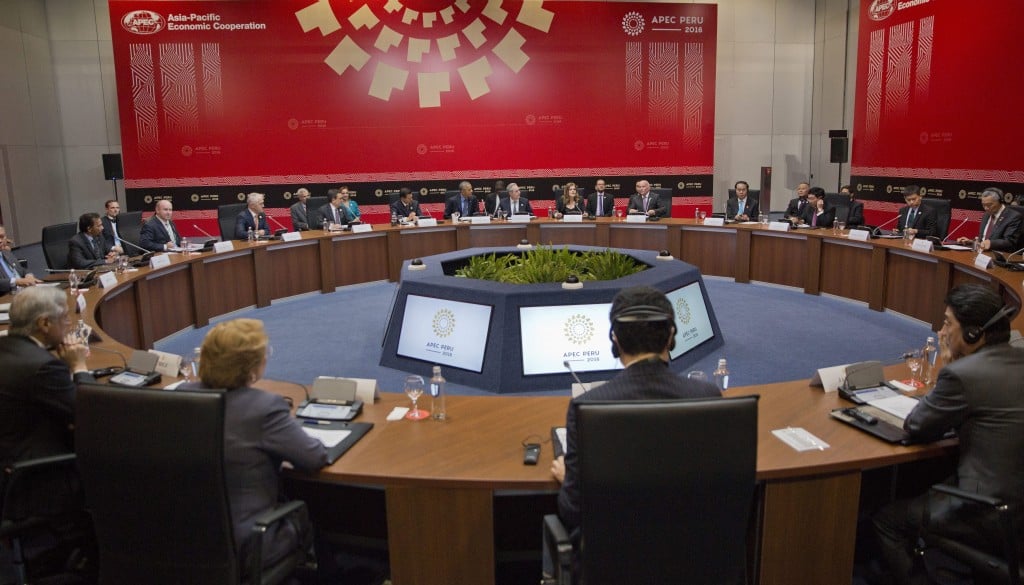 LIMA, Peru – A wave of uncertainty about the future of global trade swept over a summit of leaders from Asian and Pacific countries, as they met behind closed doors to strategize on a path forward with a protectionist president in the White House.

Donald Trump’s election has upended the annual APEC leaders’ summit where world leaders sought to calm frayed nerves and emphasize that there are ways to save a massive trade deal that the president-elect has vowed to kill.

The Trans-Pacific Partnership can’t go ahead with the approval of two biggest economies involved in the deal – the United States and Japan.

Either could kill a deal designed to be a counterbalance to China’s growing financial and economic influence in the region.

U.S. President Barack Obama said in a public talk that Trump would see the benefits of trade pacts once in office, and spoke behind closed doors to Prime Minister Justin Trudeau and other TPP leaders about the future of the deal.

Canada’s trade minister said the government’s position on the deal hasn’t changed: the decision on whether to ratify the 12-nation, Pacific Rim pact rests with the Canadian people.

“Here are the things we can say to Canadians and Canadian businesses: First and foremost, the government of Canada believes strongly in an open global economy,” said International Trade Minister Chrystia Freeland.

Trump rallied voters against the TPP during his successful presidential bid, calling the deal disastrous for American workers and the country’s economy.

Allan Culham, a former Canadian ambassador to the Organization of American States, said Trump’s rhetoric and Obama’s decision to give up on pushing the pact through Congress before the end of his term signal the “kiss of death” for the deal.

New Zealand Prime Minister John Key said there may yet be a path for the deal, even if Trump stands firm on his promise. Speaking at the summit, Key said the 11 remaining partners could propose some cosmetic changes to TPP to convince Trump to see the deal as worthwhile to his country, or renegotiate it all – something Key wanted to avoid.

Allan Bollard, executive director of the APEC secretariat, said the 11 remaining countries in the deal could ratify the agreement and hold out for a few years.

“Already it’s nearly ratified by the Japanese, and that means it will be quite difficult to change TPP. But TPP can just sit there on the shelves, so to speak, until enough economies agree to ratify it,” Bollard said in an interview prior to the summit.

Although Trudeau has pushed for countries not to give in to rising protectionist sentiments worldwide, the prime minister is expected to hedge his bets and pitch bilateral trade deals in case efforts to save TPP fail.

Freeland said the government is in trade talks with several Asian countries, including China, to expand trade opportunities for Canadian business.

“It’s worth it for Canadians to appreciate that we have a very extensive web of trading relationships here in the Asia-Pacific and we’re working hard to deepen them,” she said.

Carlo Dade, director of the Centre for Trade & Investment Policy at the Canada West Foundation, says kick-starting trade talks with the countries like Japan and Singapore would help Canada compete in the growing Asian market where Canada only has one trade agreement.

That makes APEC “a golden opportunity” for Canada to advance trade ties in Asia, Dade said.

“But that only works if we get serious about focusing time and attention around the Pacific. That’s why this APEC meeting is so important,” Dade said.

After meeting with leaders from TPP nations, Trudeau met one-on-one with Vietnam’s president shortly after leaving the TPP meeting. Vietnam is on the cusp of ratifying the agreement, but has backed off because of the change in administration in the White House.

Trudeau will also have a formal one-on-one meeting with Mexican president Enrique Pena Nieto to talk TPP and the future of the North American Free Trade Agreement, given Trump has also vowed to blow up the pact if he doesn’t get it amended to his liking.

The prime minister is also to meet informally with Obama on Sunday afternoon, shortly before the summit wraps up.