A successful holdout by U.S. players was good for the sport. Patriotism aside, so was Finland's shocking defeat of Canada. 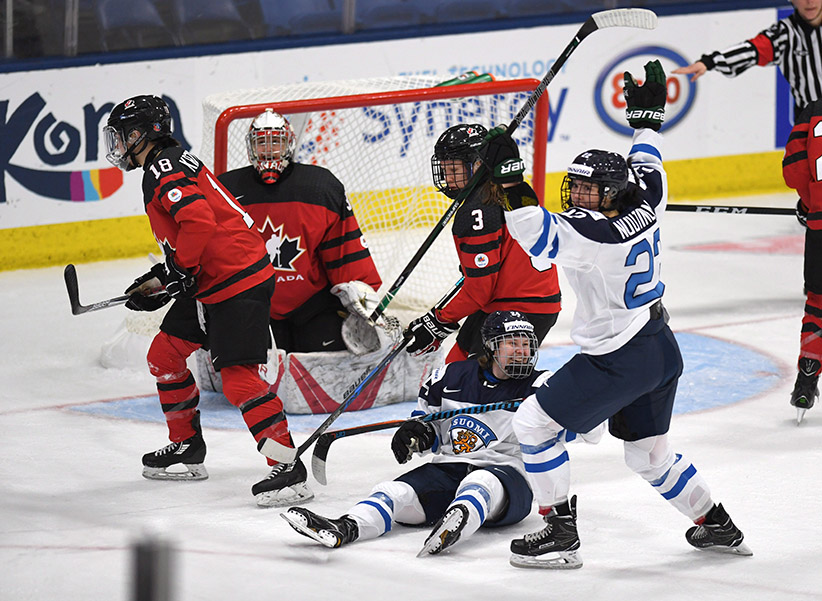 Finland’s early round win over Canada was a surprise, but not an unwelcome one for many fans of the women’s game (Jason Kryk/CP)

After the initial shock of the out-of-the-blue invite to lace up for Team USA at the 2017 women’s world championship wore off, Lauren Allen knew what she had to do. All her life, the 20-year-old self-taught goaltender’s “one and only wish” has been to land a roster spot on Team USA. To the nursing student, who forces her boyfriend to shoot on her in the parking lot after every practice, the idea of donning the red, white and blue at this year’s worlds in Plymouth, Mich.—less than an hour’s drive from her hometown—seemed the “ultimate dream come true.” But she didn’t consider the offer, even for a second.

Allen was among dozens of replacement players from college and junior programs, and professional and even recreational leagues whom USA Hockey, the sport’s national governing body, attempted to recruit after Team USA announced they were boycotting the world championship over a wage dispute. Few of the replacements were truly national-team-calibre. Allen plays club hockey for Michigan’s Grand Valley State University, one level below the NCAA’s Div. III.

Players from the No. 1-ranked, three-time defending world champion U.S. women’s team were seeking an increase from the paltry $1,000 per month USA Hockey provides them in the six-month lead-up to the Winter Games every four years.

But USA Hockey’s effort to replace the national team blew up in its face. Not one player accepted the organization’s offer to join the substitute squad, which included $3,000 in bonuses. Even the 16-year-old high schoolers turned them down. “We weren’t going to go behind the backs of our sisters. We stood with them,” says Allen. “We believe we need equality. It’s a movement, and I fully supported them.”

So did players’ unions for the NHL, NBA, NFL, MLB and WNBA, and 20 U.S. senators, including Elizabeth Warren, Dianne Feinstein and Cory Booker. Philadelphia Flyers coach Dave Hakstol called national-team players “role models.” When news broke that the men’s national team might boycott their world championship in solidarity, a settlement, believed to be worth as much as $4,000 per player per month, was ﬁnally found. Combined with money received from the U.S. Olympic Committee, annual earnings for Team USA’s female players could top $70,000, and hit $129,000 in Olympic years.

MORE: The issues behind the U.S. women’s IIHF boycott

This was just one of two major strides the women’s game took in the past month. The second came just days later, when Canada lost a 4-3 stunner to Finland—perhaps the most shocking loss in the history of the Canadian women’s team. But Canada’s loss, which followed a 2-0 blanking by Team USA, in the host team’s emotional Friday opener is, in some ways, even better news for the game than their rivals’ win at the bargaining table.

The Finns, for their part, seemed a bit underwhelmed by the historic nature of their win, celebrating with a short-lived team hug of star goaltender Noora Räty. “The Finns are kind of never too high, never too low. We’re pretty neutral,” Räty explained in response to a question about the team’s subdued response. “We don’t show our emotions. North Americans are really rowdy and loud and that’s their style.” Forward Susanna Tapani was more concise: “We’re from Finland.”

The Finns ultimately fell to Canada in a semifinal rematch, but fans of the women’s game were cheering their emergence as a top-level threat. Critics constantly use the U.S.-Canada hegemony to hammer the sport, to the point of questioning its relevance. After every lopsided win at the Olympics, American and Canadian players face an onslaught of questions from reporters demanding to know whether women’s hockey deserves to be an event at the Winter Games.

In fact, lopsided scores are hardly unique to the women’s game—Canada pasted Latvia 10-2 at the men’s world juniors last December—and the talent gap was always going to take time to close. This year’s women’s world championship provided hints of that, with a handful of major upsets, including Russia’s 2-1 win over Finland and a 3-2 win by Germany over Sweden. 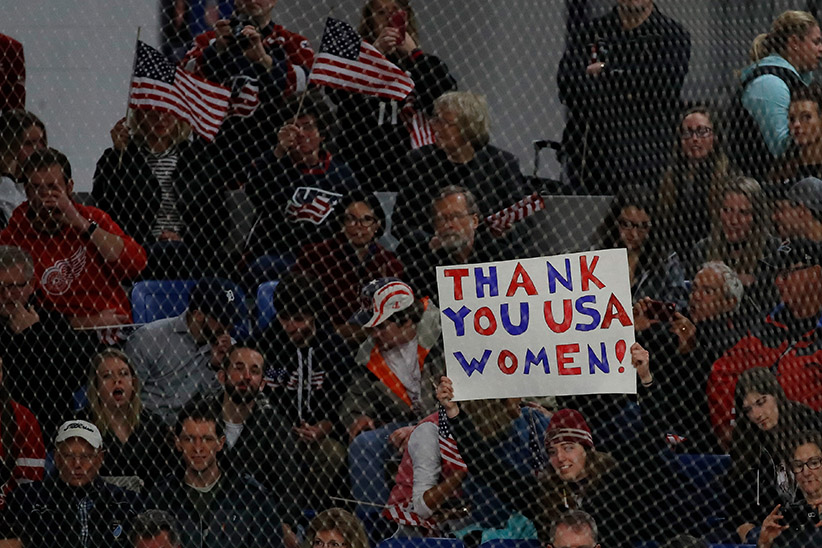 Fans got behind the U.S. players’ battle for better compensation (Gregory Shamus/Getty)

In many ways, Canada can take some credit for the widening of the talent pool. After the ’98 Nagano Games, Canada’s women’s hockey team, which came home with silver medals, fought hard for the national program’s female players to be better compensated—and heard. That led to the creation of the Women’s High Performance Advisory Committee, made up of current and former players, and a serious investment in the female game, which included welcoming girls into hockey from a young age, and guaranteeing livable wages in both Olympic and non-Olympic years (Team Canada athletes typically earn some $40,000 tax free, meaning they no longer have to work two or even three jobs to support themselves and train between shifts).

Other national governing bodies have sought to emulate Hockey Canada’s rigorous training and on-ice program. Team Finland has revamped weight training and conditioning, and brought in meal programs and new on-ice systems. Key to the recent Team USA deal was USA Hockey’s agreement to form a national female advisory body mirroring Hockey Canada’s. This might also help the Americans avoid embarrassing episodes like the 2014 unveiling of the U.S. jerseys ahead of the Sochi Olympics, which none of the players on the women’s team witnessed: not one was invited to the press conference.

A lot can happen when staid hockey executives are forced to change. It wasn’t that long ago, after all, that Hockey Canada made the women wear pink Team Canada jerseys and socks at the women’s world championship.