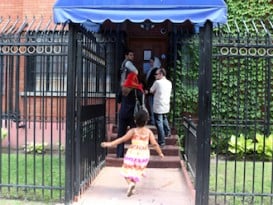 People wait at the door of the former Iranian embassy in Ottawa on Sept. 7, 2012. (Fred Chartrand/CP)

An Iranian Islamic centre in Montreal is offering a full range of consular services — one year after Iran’s official embassy in Ottawa was shut down and its diplomats sent home.

Last month the Iranian Islamic Center on rue Saint-Jacques launched a Farsi-language website advertizing an “Iranian consular office” for people needing everything from passport renewals to visas and birth certificates.

Saleh Seboweh, imam at the centre, says he was asked to provide the service by Iran’s Ministry of Foreign Affairs.

“I am not an employee of the Iranian government. I have contact with the people there, Ministry of Foreign Affairs and other places. They know me very well, and they trust me,” Seboweh told Maclean’s.

“Because the community, they have a problem. So many of them don’t have a passport. They want to travel; they can’t. So many problems here. We have a lot of babies born; they don’t have Iranian citizenship. And that’s why we just want to help the community. That’s why we accept this.”

Saleh says the Canadian program is run in co-operation with Iran’s Ministry of Foreign Affairs and the Iranian embassy in Cuba. The Iranian Islamic Center in Montreal does not provide visas and other certificates itself. Instead, one of its employees will take the necessary paperwork to either Tehran or Havana and return with the requested passport or birth certificate. He says the centre charges a fee to cover this cost.

Previously, Saleh says, Iranians in Canada would typically go to Washington, where the Pakistani embassy takes care of Iranian consular services. But this is not practical for many people, he says, especially those with expired passports preventing travel to America. It is also expensive.

In a statement emailed to Maclean’s, John Babcock, a spokesman for Canada’s Department of Foreign Affairs, Trade and Development, said a state closing its mission may, with the approval of the host nation, designate a third state to look after the interests of its nationals. At present, no country or institution has Canada’s permission to to provide consular services to Iranians in Canada.

“The Foreign Missions and International Organizations Act (FMIOA) makes it an offence to misrepresent premises as a consular post. The RCMP would be responsible for investigating any alleged violations of the FMIOA,” says Babcock.

Saleh says he has not had any trouble from Canadian authorities since the centre began providing consular services. “The Canadian government, they know me very well,” he says, adding that he works with Corrections Canada, visiting Shia Muslim prisoners.