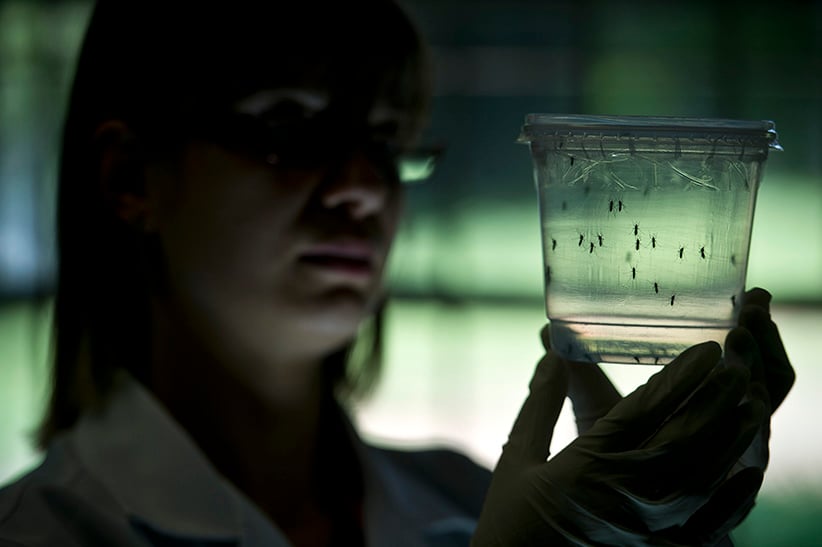 Aedes aegypti mosquitos are seen in containers at a lab of the Institute of Biomedical Sciences of the Sao Paulo University, on January 8, 2016 in Sao Paulo, Brazil. Researchers at the Pasteur Institute in Dakar, Senegal are in Brazil to train local researchers to combat the Zika virus epidemic. (NELSON ALMEIDA/AFP/Getty Images)

JOAO PESSOA, Brazil – Teams of U.S. and Brazilian health workers ventured into dicey slums, fought through snarled traffic and braved torrential downpours on the first day of their effort to determine if the Zika virus is causing babies to be born with a birth defect affecting the brain.

The eight teams, each made up of one “disease detective” from the U.S. Centers for Disease Control and Prevention and three Brazilian health workers, went to work Tuesday in Paraiba, the impoverished state in northeastern Brazil that is one of the epicenters of the country’s tandem outbreaks of Zika and microcephaly.

Their goal is to persuade about 100 mothers of infants recently born with the defect as well to enrol in the study. They also need participation as controls of two to three times as many mothers from the same areas who delivered babies without microcephaly at about the same time.

The study aims to determine if the Brazilian government is right that Zika can cause microcephaly, or whether the mosquito-borne virus is not in fact to blame or is only partially responsible, as a growing chorus of doctors in Brazil and beyond have begun to suggest.

The seemingly straightforward task of locating the women and infants was fraught on day one by traffic jams, logistical snags and menacing weather, though the teams soldiered stoically on.

Stuck in the chronic gridlock of the state capital, Joao Pessoa, one team missed its first appointment, and the two home visits that it had scheduled for morning didn’t get underway until well after lunchtime.

“Obviously, we’ve seen the problems of logistics _ to be able to reach the families, to have them be there,” said Dr. Alexia Harrist, a Boston-born pediatrician who works for the CDC’s Epidemic Intelligence Service. “If things take longer, things take longer, but I think we’re all really dedicated to getting it done.”

Packed into a small sedan, Harrist, three Brazilian health workers and a driver weaved from the CDC’s headquarters in a beachfront hotel to the outskirts of Joao Pessoa along pothole-marred streets swimming with runoff from recent rains.

They turned onto a side street lined with trash, then turned again and again onto successively narrower and more pocked streets that carried them deep into the heart of the Taipa shantytown. The Aedes aegypti mosquito that spreads Zika proliferates in such neighbourhoods, where omnipresent trash provides breeding grounds in discarded margarine tubs, yogurt containers and plastic bottle caps.

When the going got too rough, Harrist and her colleagues parked and headed on foot along a dirt road running with raw sewage and dotted by foraging chickens and goats to a three-room cinderblock home.

“I didn’t expect to see all these people,” Santos said, adding that the visit renewed her hopes of understanding what happened to Shayde. “Not only me, but all the mothers, we want to understand the mystery behind all this _ what really causes microcephaly?”

She and the family answered an extensive questionnaire probing everything from whether she used insect repellent during pregnancy to what was the source of their drinking water. The team also drew blood samples from mother and infant, setting off screams from a child who, like many infants with microcephaly, is rarely quiet.

Down the street, the team knocked at an abandoned warehouse where another new mother, 26-year-old Aline Ferreira, squats with her fisherman husband and three kids.

Her 4-month-old, Angeline Karolayne, is in good health and doesn’t suffer from microcephaly, and Ferreira agreed to take part in the study as a control case. Such cases will be a critical element in understanding whether Zika is triggering microcephaly and, if so, whether it’s doing so alone or with contributing factors.

Ferreira patiently responded to the litany of questions. “When I was pregnant, there were all these problems with Zika and microcephaly and … I could very well be in the place of any mother whose baby has microcephaly,” she said.

Organizers expect it will take a month to gather data, but acknowledge it could take longer. Ferreting out results from the data will take several more months.

Despite Tuesday’s rocky start, the CDC’s Harrist said the generosity and openness of the two young mothers her team managed to contact gave her hope.

“I’m actually encouraged by what happened today,” said Harrist, who worked in Sierra Leone during the Ebola outbreak in West Africa.

She said Santos and Ferreira seemed enthusiastic to join in the study. “I hope that means they think that the study is important,” she said.