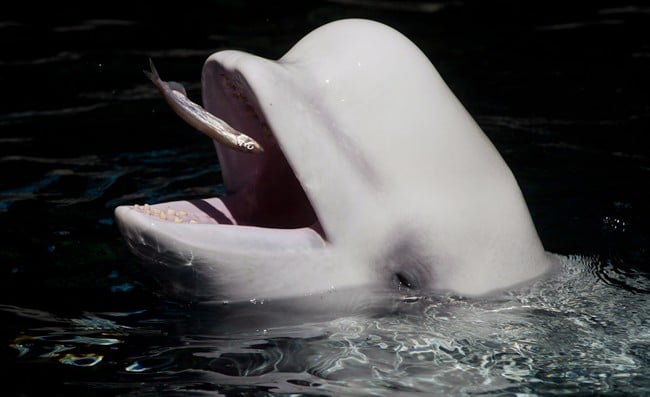 Aurora catches a fish thrown by a trainer while being fed at the Vancouver Aquarium in Vancouver, B.C., in June 25, 2014. THE CANADIAN PRESS/Darryl Dyck

VANCOUVER – The Vancouver Aquarium is facing criticism from animal welfare groups after the second death of a beluga whale at the facility in just under two weeks.

The 30-year-old whale was showing symptoms of abdominal cramping, loss of appetite and lethargy but earlier in the day Friday, veterinarian Dr. Martin Haulena said there were signs Aurora was improving.

A statement from the Vancouver Aquarium said the marine mammal care team had worked relentlessly to treat the whale and are heartbroken by her death.

Animal welfare groups have responded to news of the death saying it’s time the practice of keeping marine mammals in captivity is reviewed.

The non-profit ecology organization Lifeforce released a statement saying the capture of whales should be banned, and the Vancouver Humane Society has called for an end to holding any cetaceans in captivity.

The humane society’s communications director Peter Fricker says whales should be able to enjoy the freedom of the open ocean and keeping marine mammals in tanks is unnatural and cruel.

Aurora had lived at the aquarium since 1990. Her offspring Qila was the first beluga to be born in captivity in Canada in 1995.

The Vancouver Aquarium said in a statement Friday that in keeping the whales at the facility, they were able to inspire generations of visitors and contributed to a number of studies on the physiology and hearing abilities of belugas.

However, Fricker said in an interview that he believes the amount of research conducted by the aquarium doesn’t justify keeping the animals in captivity, and that there is no evidence having animals on display improves the public’s knowledge about wildlife.

“Most people just go and look at the animals, and obviously they’re tremendously charismatic, but that doesn’t mean you learn anything about the species and there is no research that we’re aware of that they have any educational value in terms of being put on display,” he said.

Aurora was the last beluga being held at the Vancouver Aquarium. The facility’s five other belugas are living at various locations around the United States while plans for expanding the Stanley Park facility, including doubling the surface area of the beluga tank, are underway.

Fricker said the humane society is urging the aquarium to reconsider the decision to expand the facility and instead phase out their cetacean program.

“They should focus on what they’re really good at which is rescue, rehabilitation and release,” he said.

The Vancouver Aquarium said officials would not be providing comment Saturday while a necropsy on the recently deceased beluga is performed, and expected more details to be released on Sunday.