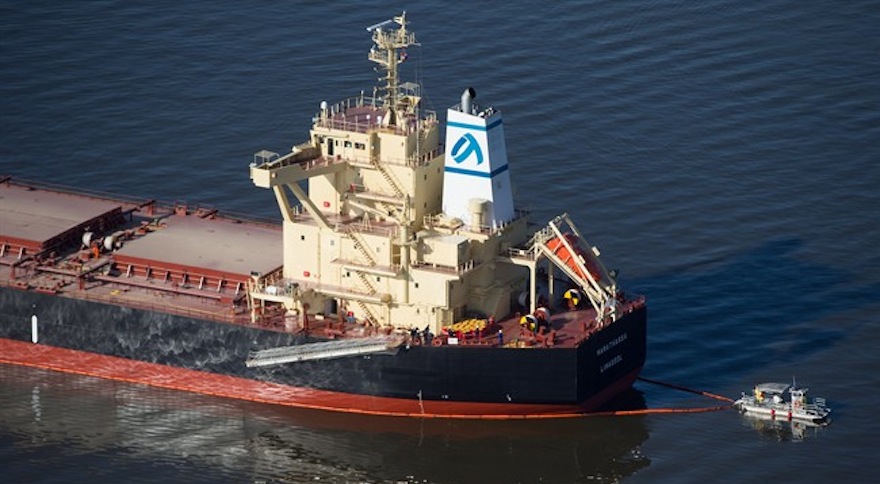 VANCOUVER – Most of the toxic bunker fuel that spilled into the waters of Vancouver’s scenic English Bay has been cleaned up, and crews have shifted their focus to clearing the shoreline, officials say.

Coast Guard assistant commissioner Roger Girouard said a Transport Canada flyover at sunset Friday saw only about six litres left in the water and most of it likely evaporated overnight.

About 2,700 litres of the black oil spilled on Wednesday from the MV Marathassa, a Japanese-made ship on its maiden voyage to pick up grain from Vancouver.

The location of the leak has now been identified as the hull outlet, and officials believe the brand new ship built to the latest standards suffered a malfunction.

Divers have been out each day to ensure that no further pollution has been coming from the vessel, and marine safety inspectors have boarded the ship daily, said Yvette Myers of Transport Canada.

But divers are not testing the water and it is not known if any fuel has sunk to the bottom of the bay.

“That a small amount of oil might accumulate around some flotsam, a piece of wood, or something weighted, is certainly within the range of possibility, but we don’t expect any significant volumes to have gone down to the ocean floor, Girouard said.

He added work will continue for several days to clean up the beaches, where he says soiling is relatively minor despite a couple of spots where oil coated some rocks.

Crews have visited and assessed several spots on the shoreline, including the south shore of English Bay near Stanley Park, as well as Sandy Cove, the hardest-hit area in West Vancouver.

No marine mammals in distress have been found, but several oiled birds have been captured and taken to refuge. Girouard said the “small number” of affected birds is proof of the coast guard’s “successful” response.

The coast guard has faced harsh criticism for its response to Wednesday’s spill, including from British Columbia premier Christy Clark and Vancouver Mayor Gregor Robertson, who called it “totally inadequate.”

While the initial report of pollution in the water came in at 5 p.m., the coast guard did not have an oil-absorbing boom in place until midnight and did not alert the city until 6 a.m. Thursday.

Environmental groups and concerned residents gathered across the province on Saturday to call on Clark to pull out of the National Energy Board review process of Kinder Morgan’s proposed Trans Mountain pipeline expansion.

The expansion would bring more tankers, some carrying diluted bitumen, to B.C.’s coast. One environmentalist at English Bay called the recent spill an “absolute wake-up call.”

“The handling of that has been really concerning, that we aren’t prepared to deal with a relatively small spill of bunker fuel,” said Alexandra Woodsworth of the Georgia Strait Alliance.

“If we can’t deal with that, how can we deal with a massive spill of diluted bitumen?”

Kinder Morgan sent a statement calling the spill an “unfortunate situation” it is watching closely but said it is unrelated to Trans Mountain.