A new NDP leader, a Liberal boxer, and a Canadian cycling champion grabbed headlines in 2012. 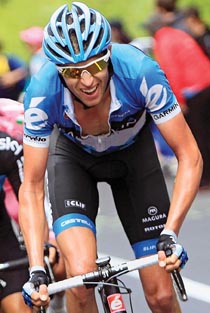 In October 2011, the bid was, at best, unlikely. Thomas Mulcair, a former Liberal Quebec cabinet minister, announced he would be running to replace the late Jack Layton at the helm of the NDP, a party that has clung to its social activism throughout its 50 years. Conservatives called Mulcair a political opportunist, and opponents within the NDP said he would betray the party’s social legacy, but by the spring of 2012, the MP from Outremont was the unshakable front-runner. He did not embrace every fringe social issue, nor did he make generous policy proposals at every campaign stop. Instead, Mulcair broadened his appeal by casting himself as the leader who could take on Stephen Harper and take the NDP to the government benches.

The son of Pierre Trudeau has yet to win the Liberal leadership, but Justin Trudeau proved he could be a contender. First there was the charity boxing match, where the wiry MP from Papineau defeated beefy Conservative Sen. Patrick Brazeau—the 3-1 favourite—in a third-round technical knockout. Soon after, people speculated Trudeau might capitalize on the moment with a Liberal run. After months courting support on the Hill and in the media, Trudeau entered the race in October with a commanding lead over his challengers.

Canadian cyclists don’t usually attract the adoring throng that is commonplace for their European peers. Then again, Canadians never had a champion to cheer for. In May, Ryder Hesjedal, 31, made history when he won the Giro d’Italia—a gruelling three-week race through the Dolomites and the Italian Alps—and became the first Canadian to win a Grand Tour. The Victoria, B.C., native entered the final stage of the race 31 seconds behind Spanish competitor Joaquim Rodríguez, but powered through the final ascent and tore through the streets of Milan to win by a razor-thin 16 seconds. He would later crash out of the Tour de France and post a lacklustre time at the London Olympics, but Hesjedal’s Italian job turned him into a bona fide hero.

Edvard Munch’s The Scream shattered records when it sold for US$119.9 million at a Sotheby’s auction this spring. While an anonymous buyer took home the Expressionist masterpiece, the real winner was the seller, Norwegian businessman Petter Olsen. Olsen’s father, a shipping magnate, was a friend and patron of Munch’s; the sale of the piece will help fund a new museum in honour of Munch’s life and work. The painting is one of four versions of The Scream, the only one not part of a museum collection.

PQ on the march

The Quebec election was not supposed to be a referendum on tuition fees, but what started as a student protest in Montreal soon became the biggest political conversation in Canada. While many, including Liberal premier Jean Charest, dismissed the movement as a disruptive minority, Parti Québécois Leader Pauline Marois made the students’ opposition to a tuition hike a central part of her party’s platform. After a divisive summer of marches and strikes, the protest’s impact was felt at the ballot box when the PQ was elected to form a minority government and Marois became Quebec’s first female premier.

It was hugs all around when U.S. President Barack Obama and Secretary of State Hillary Clinton visited the lakeside home of Burma’s opposition leader Aung San Suu Kyi in November. The home, where she was held under house arrest for much of the last two decades by the country’s military rulers, is now a symbol of the fragile flowering of the country’s democratic reforms. Obama called her “an icon of democracy.” But Suu Kyi knows the progress is tenuous; the most dangerous time, she warned, is “when we think that success is in sight.”

Xi Jinping, the 59-year-old incoming president and military ruler of China’s 1.3 billion people, well knows how fleeting popularity can be. His father was a revolutionary hero who was purged, humiliated and reduced to poverty during the madness of the Cultural Revolution of the 1960s and 1970s. “It makes you grow up earlier,” Xi said. His iron will is softened by his glamorous pop star wife, Peng Liyuan, but Xi served notice he will not tolerate the bribe-taking and corruption that has plagued the Communist bureaucracy. Whether he can root out the decades of rot during his 10-year term is another matter. He also offered a populist pledge: “better schooling, more stable jobs, more satisfying incomes and more reliable social security.”