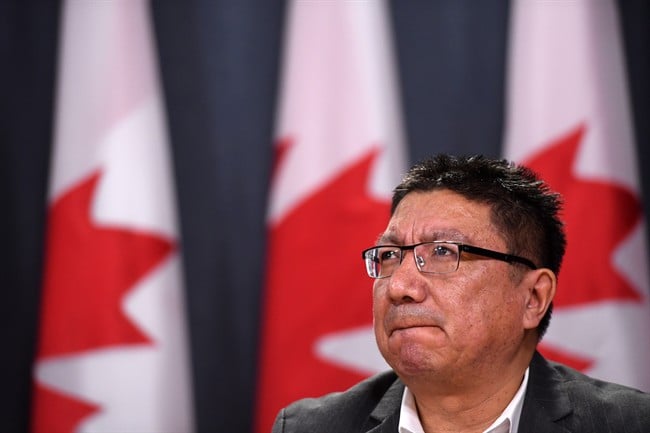 Last summer’s emergency funding proposal from Wapekeka First Nation, a tiny fly-in community 600 kilometres north of Thunder Bay, described a number of suicide attempts and fears that a group of young people planned to take their own lives, documents show.

Nishnawbe Aski Nation Grand Chief Alvin Fiddler, whose organization represents 49 communities in northern Ontario, said Health Canada failed to give a proper explanation for why the money never came through.

“I heard a senior official from Health Canada say … that when they received that proposal from Wapekeka it was a bad time, it was an awkward time for them to even consider approving that request,” Fiddler told a news conference in Ottawa.

“It was awkward for us to bury two young children in the middle of the winter,” he said of Fiddler’s remarks about how Health Canada characterized the funding request.

“It was awkward to break ground in permafrost so that we can bury these children. It was awkward for our youth to cry at the funeral.”

He remembered Fox, his niece, as a very bright young girl who was loving and kind.

“She was one of those girls who would come up to you and hug you with a big smile on her face,” he said. “We are very sad and very hurt that we lost her. It is very painful to put her away, to see her go like that. She had a future in front of her.”

Fiddler said the grief was palpable at Fox’s funeral.

“The pain is just so overwhelming,” he said. “It is impacting our whole region. That’s why we are here issuing yet another call to this government … We cannot afford to lose any more children.”

In a statement late Wednesday, Health Canada said it told the community last fall that it would pursue funding opportunities for Wapekeka.

“Funding has been identified to assist the community and Health Canada has been working over the last several days with First Nations and provincial partners to support the community’s vision for youth mental health programming,” the department said.

“Our community needs help,” he said. “My chief and council cannot function at 100 per cent capacity because they are preoccupied with the hurt, the pain, the ongoing crisis.”

Some 26 local youth have been identified as high-risk, with four of them having been flown out to ensure they have round-the-clock medical attention.

New Democrat MP Charlie Angus represents a sprawling northern Ontario riding that ensures he is no stranger to the squalor and tragedy that plagues remote First Nations communities.

On Thursday, he likened the situation in Wapekeka to hurricane Katrina, a devastating storm that walloped New Orleans in 2005 and quickly became a symbol of federal intransigence in helping low-income minority communities in need.

“This is a slow-moving Katrina,” Angus said.

“When children are facing risk in a northern community, it is at an awkward time for the bureaucracy. Well, too damn bad … we’re either going to say that children are valued in this country, or we’re not.”