What political leaders said about the Gerald Stanley verdict

In Saskatchewan and beyond, reaction ranged from support and sympathy for Boushie's family to calls for reform 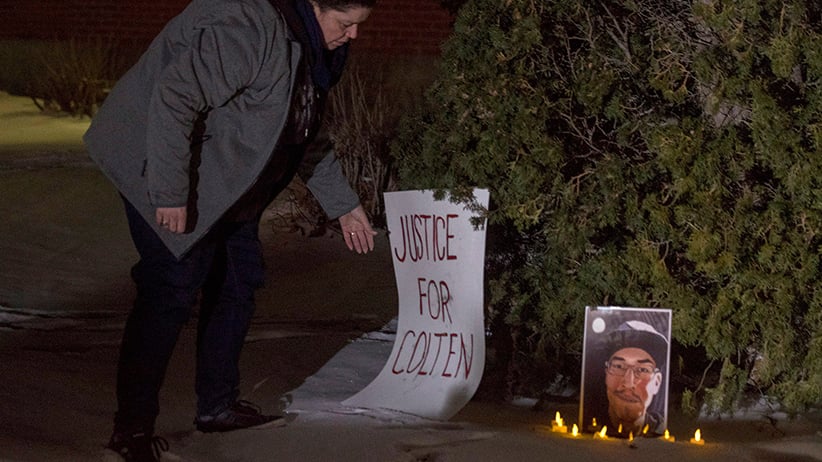 Michelle Stewart, a supporter of the Boushie family, looks at a sign and photo of Colten Boushie in front of the Court of Queen’s Bench on the day of closing arguments in the trial of Gerald Stanley  THE CANADIAN PRESS/Liam Richards

An assortment of Canadian leaders—local, provincial and federal (including prime ministerial)—have weighed the Gerald Stanley verdict. Stanley, a Saskatchewan farmer charged with second-degree murder in the killing of Colten Boushie, a 22-year-old Cree man from the Red Pheasant First Nation, was found not guilty by a jury consisting of entirely white people.

Comments from the country’s politicians—most of them white—on the outcome of the high-profile case ranged from support and sympathy for the Boushie family to calls for the Canadian justice system to do better.

WATCH: ‘There is a problem’ for First Nations in the justice system: Trudeau

“[The outcome is] a defining moment for our city, our province, our country, where we decide what kind of country we’re going to be,” Clark said at a meeting with Boushie’s family and First Nations chiefs in Saskatchewan. “We have to face and talk about reconciliation not just in the good times, but also in those moments when it’s challenging.”

RELATED: The Colten Boushie case a possible ‘quick fix’ for the legal system

Scheer, who holds the Regina—Qu’Appelle riding in Saskatchewan, called Boushie’s death “tragic,” but was critical of other national leaders commenting on a judicial process. “It’s appropriate to show concern and support… for the family of the victim, but I think it is important that we remember that politicians don’t decide these types of things,” he said from Halifax.

Glen Luther, criminal law expert at the University of Saskatchewan

According to Luther, this type of engagement from federal leaders after a court ruling is “very rare,” he told the CBC. He believes the Stanley verdict could provide a wake-up call, saying “it does fall on the federal government to fix that, they’re in charge of the justice system, they’re the ones that can make the reforms.”

“I’m not going to comment on the process that lead us to this point today,” Trudeau said from a press conference in the U.S. “But I am going to say that we’ve come to this point as a country far too many times. Indigenous people across this country are angry, they’re heartbroken—and I know that Indigenous and non-Indigenous Canadians alike know that we have to do better.”

RELATED: The Gerald Stanley verdict is a blow to reconciliation—and a terrifying one at that

Jody Wilson-Raybould, Minister of Justice and Attorney General of Canada

“My thoughts are with the family of Colton Boushie (sic) tonight,” Wilson-Raybould wrote on Twitter. “I truly feel your pain and I hear all of your voices. As a country we can and must do better – I am committed to working everyday to ensure justice for all Canadians.”

Thank you PM @JustinTrudeau. My thoughts are with the family of Colton Boushie tonight. I truly feel your pain and I hear all of your voices. As a country we can and must do better – I am committed to working everyday to ensure justice for all Canadians. https://t.co/HvjV0bofrQ

“Devastating news tonight for the family & friends of #ColtenBoushie. My thoughts & prayers are with you in your time of grief & pain. We all have more to do to improve justice & fairness for Indigenous Canadians,” Philpott wrote on Twitter.

Devastating news tonight for the family & friends of #ColtenBoushie. My thoughts & prayers are with you in your time of grief & pain. We all have more to do to improve justice & fairness for Indigenous Canadians.

Jagmeet Singh, leader of the NDP

On Twitter, Singh opposed the verdict altogether, saying, “There was no justice for Colten Boushie. Already Indigenous youth live with little hope for their future & today they have again been told that their lives have less value. We must confront the legacy of colonialism & genocide so they can see a brighter future for themselves.”