What the West really knows about the state of ISIS

What does the West really know about the inner workings of Islamic State and how it will end? Alarmingly little. 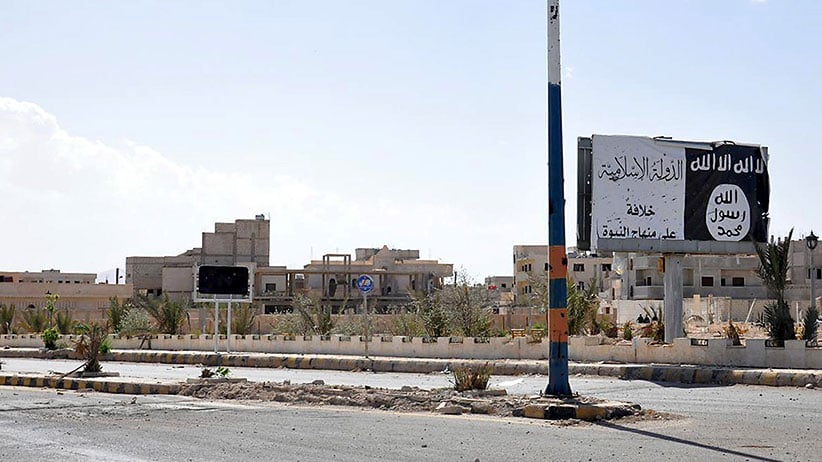 A billboard (R) belonging to the Islamic State fighters erected along a road, is pictured after forces loyal to Syria’s President Bashar al-Assad recaptured Palmyra city, in Homs Governorate on March 27, 2016. (SANA/Reuters)

There are 23 blanks to fill in on the standard application form to join Islamic State. The terrorist group demands the name, date of birth, nationality and blood type of its potential recruits along with more-to-the-point information like past jihad experience, weapons specialization and next of kin. The most important question, however, is multiple choice. Does the applicant want to become a) a fighter, b) a suicide bomber, or c) an Inghimasi—a commando combination of the first two options. There are no spaces for would-be cooks or administrators.

As it turns out, most jihadis don’t actually have a death wish. An analysis of 3,000 leaked application forms—including one from Mohamed Belkaid, who was shot dead by police in Brussels in March—by the German paper Die Zeit found that less than 10 per cent indicated a willingness to become a human explosive device, and even fewer, battlefield kamikazes. Most recruits in the document cache hailed from Tunisia, Saudi Arabia, Libya, Morocco and Egypt. They were young—largely in their 20s—and from poor backgrounds, with little education, or work history. Asked to grade their own knowledge of sharia—the Islamic code that governs everything in Islamic State territory from crime to sex to prayer—three-quarters termed it “weak.”

The papers provide a rare glimpse into the weirdly bureaucratic workings of Islamic State, commonly referred to as ISIS. But they also underline a central challenge for the international coalition battling to quash it: how little we actually know about the world’s scariest terror organization.

It was just over two years ago that U.S. President Barack Obama dismissed the ISIS takeover of Fallujah as an inconsequential win by al-Qaeda’s B-team, drawing a distinction between a network capable of major overseas terrorist plots and local Iraqi jihadis. “If a JV [junior varsity] team puts on Lakers uniforms, that doesn’t make them Kobe Bryant,” he told The New Yorker. Six months later, the group controlled large swaths of both Iraq and Syria (an area the size of Belgium, or even the United Kingdom, depending on whose estimates you trust) and Abu Bakr al-Baghdadi, its leader, had declared a caliphate.

Still, the foreign fighters that swelled ISIS ranks to as many as 35,000-40,000 men, were generally considered to be only faraway threats. Even today, after deadly terror attacks in Paris and Brussels, the European Union can’t agree on just how many of its own citizens have left to join the group—or since returned. The 28 member states don’t have a common definition of “foreign fighter,” for one thing. “Many reports use estimates instead of exact numbers,” complained the International Centre for Counter-Terrorism in The Hague, in a study released in early April. “Despite the widespread media attention for foreign fighters in Europe, very little is known about the phenomenon itself.”

Recently, after a series of military setbacks for ISIS, including the Syrian regime’s retaking of Palmyra in late March, there’s been a sense that the tide has turned. “Working by, with and through local partners, we have taken back 40 per cent of the territory that Daesh controlled a year ago in Iraq and 10 per cent in Syria,” Anthony Blinken, U.S. deputy secretary of state, told Congress on April 12, using the Arabic name for Islamic State. “In fact, we assess [that] Daesh’s numbers are the lowest they’ve been since we began monitoring their manpower in 2014.” Other American officials have been talking up the group’s money troubles, suggesting that the coalition air campaign against oil fields, refineries and tankers (as well as the low price of crude) has shrunk ISIS revenues by half, leading to pay cuts for fighters, shortages of supplies and sparking infighting among senior commanders.

But there’s little hard evidence to back up such hopeful claims. Secret camera footage smuggled out of Raqqa, the caliphate’s Syrian capital, and broadcast on Swedish TV last month, showed car-filled streets and shops stuffed with consumer goods—including hair dye from Hungary, albeit with the female faces on the packaging scribbled over. Aymenn al-Tamimi, an Israel-based jihad intel research fellow with Middle East Forum, has been collecting ISIS documents—public proclamations, health advisories, tax bills, security notices and more—since 2013. While he sees some signs of stress, there’s no indication that the leaders are losing control. “Militarily they’re not what they used to be, but I don’t think they’re on their last legs,” he says. “The time scale of Islamic State’s demise—if it’s happening—is certainly over years, not months.” Tamimi points to ISIS’s difficulties in meeting mobilization targets to keep pace with its battlefield casualties. In October, for example, the caliphate declared a month-long amnesty for local deserters, rather than the usual punishment: crucifying them at traffic roundabouts.

But he calls the widespread media reports of deep pay cuts for fighters “overblown.” The base salary of $50 a month—paid, ironically in U.S. dollars—has been trimmed, yet the bonuses—$50 more for each wife, $35 for every child under 15, appear to still be in place. And while ISIS has struggled to maintain the health care system—doctors and pharmacists have been selling off their supplies on the black market and using the funds to flee—the rest of its bureaucracy remains robust. “This is actually something that exists. There is a government on the ground,” Tamimi says. “And they’ve brought a sense of stability and order.” Especially compared to areas controlled by other rebel forces in Syria.

Much of what the West thinks it knows about the inner working of Islamic State actually comes from defectors—a biased, and potentially distorting source. Last fall, the U.K.-based International Centre for the Study of Radicalisation and Political Violence examined media interviews with 58 such runaways and concluded that the reasons why fighters left “often mirrored” those that had spurred them to join. “Practically all of them argued that the group hadn’t lived up to their (political, religious, or material) expectations, and that IS’ actions and behaviours were inconsistent with its own claims and ideology,” said the report. Chief among the complaints was that ISIS spends too much time fighting, killing or raping other Sunni Muslims, and that this was not the kind of jihad they had joined up for.

Anne Speckhard, a Georgetown University expert on the psychology of terrorism, has interviewed more than 30 former ISIS members in her work with the International Center for the Study of Violent Extremism. She says there is a gulf between Islamic State’s claims of piety and their actions, which reportedly include using “female seductresses” as a recruiting tool, and plenty of petty corruption. “They sell the idea that they are building this utopian caliphate that’s going to be ruled by Islamic law, but they don’t live by it,” says Speckhard. While that hypocrisy might bother some of the idealistic foreign fighters, she admits it doesn’t matter much to the locals who now find themselves living under Islamic State control.

“We ask people: what is ISIS doing for you? They say, ‘I get paid, I have a job. I can get a ration card. I got a propane tank.’ ” Where religion, or blandishments, don’t work, there is always fear: a repressive intelligence and security network built and maintained by former associates of Saddam Hussein. “We hear over and over again that there are tons of Iraqi Baathists,” she says. “And they’re the ones who have brought that discipline to ISIS. It’s not a way to win loyalty, but it’s effective for maintaining power.”

In some ways, the West has become as invested in the caliphate as the Islamic State. Defeating the group on the ground in Iraq and Syria will delegitimize the group’s claims of divine guidance and backing, goes the thinking, and let the air out of the jihad. But that trusts that the foreign fighters will be so demoralized that they’ll just pack it in and go home, which isn’t exactly how things have played out post-9/11. “Two years from now they may not be called ISIS, but the survivors of the battlefield are still going to be primed for violence and spreading out to weak states around the world,” says Clint Watts, a former FBI counterterrorism agent, now a fellow with the Foreign Policy Research Institute in Philadelphia. American and European authorities failed to predict the rise of Islamic State, so what makes them so convinced that they know how—or even why—it is going to fall, he asks? “There is no big strategic solution,” says Watts.

Instead, what likely lies ahead is decades more effort to track and contain veterans of the jihad, who are now more numerous than ever before. “Nation-building didn’t work and there’s a massive security vacuum all over the region post-Arab Spring. This will happen again and again,” predicts Watts.

Jihadis may not be so keen on certain death, but that doesn’t mean they’re ready to stop fighting.