What we know about the COVID variant first found in India

How quickly it spreads, how it responds to vaccines and how we can stop it from causing a fourth wave in Canada 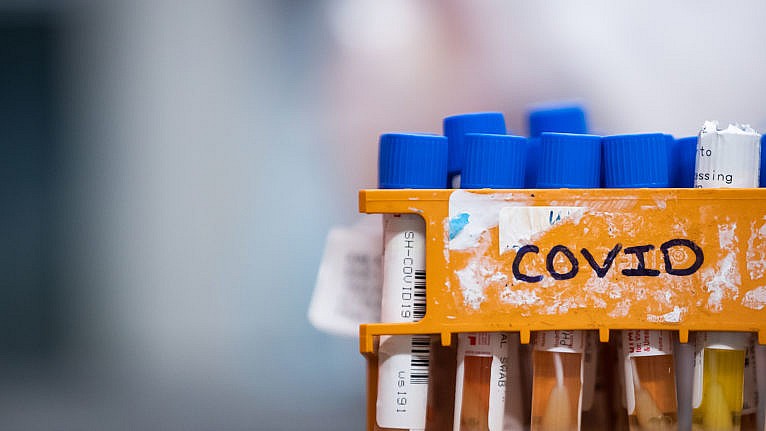 Specimens to be tested for COVID-19 in B.C. (Darryl Dyck/CP)

Canada’s vaccination effort is picking up steam. Our case counts are going down. But there could be trouble brewing in the form of a new variant of concern.

As of now, the B.1.1.7 variant is the dominant strain of SARS-CoV-2. It’s one of four variants of concern (VOC) detected in Canada through screening and genomic sequencing, and accounts for the vast majority of all VOC cases, according to the CTV variant tracker:

This month, the focus has shifted from the established VOCs to the newest one, which was first detected in India last October. Viruses like SARS-CoV-2 mutate regularly, so it can take a while for new versions to be noticed and examined, which explains why it was May 6 for Public Health England to “escalated B.1.617.2 from a variant under investigation to a variant of concern based on an assessment of transmissibility being at least equivalent to B.1.1.7 (Kent).” On May 11, the World Health Organization did the same. As of May 19, the B.1.617.2 variant had been detected in 43 countries on six continents, according to Public Health England.

The newness of B.1.617 as a VOC means the number of cases reported so far in Canada is almost certainly low. On Monday, B.C.’s Centre for Disease Control reported 378 cases had been detected, as of the week ending on May 15.

Experts expect that B.1.617.2 will overtake B.1.1.7 within a matter of weeks to become the dominant strain in Britain. Such “lineage replacement” has occurred several times during this pandemic, most famously with the arrival of the British variant, B.1.1.7.

Right now, Britain’s overall case counts are low, around 25 per million population, compared to Canada’s seven-day average of roughly 100 per million population. “This is like a little epidemic,” explains Dr. Lynora Saxinger, an infectious diseases physician at the University of Alberta in Edmonton, where the variant takes over even while there are low overall levels of transmission. What is concerning is that, when B.1.1.7 displayed that same pattern, that takeover of the top spot was followed by a wave in Canada and elsewhere. But there is one notable difference, time: we’re steadily getting vaccinated.

We’re not sure. Yes, that’s frustrating. But with new variants it takes time for researchers to find answers. Luckily for the world, Britain is a leader in genomic testing and sequencing.

One reason for the uncertainty: some B.1.617.2 outbreaks in Britain are still growing while others are subsiding. Still, experts expect that B.1.617.2 is more transmissible than B.1.1.7. They just aren’t sure by how much.

And while cases of B.1.617.2 are rising slightly in Britain, that increase is concentrated in less-vaccinated groups, especially the young, according to data crunched by the Financial Times. (Britain is only slightly in front of Canada in terms of the share of its population given first doses, though it’s much further ahead in second doses; it’s also lowering the age of eligibility very slowly, only recently extending it to those under 40 years old.)

Is B.1.617.2 associated with severe COVID-19, including hospitalizations and deaths?

That is still to be determined. On May 23, the British government stated that, as with other variants, the vaccines’ effectiveness against hospitalizations and deaths caused by B.1.617.2 is expected, though it cautioned, “There are currently insufficient cases and follow-up periods to estimate vaccine effectiveness against severe outcomes from the B.1.617.2 variant.”

As it stands, none of the mutations in the B.1.617 subtypes are linked to increased severity, Julian Tang, a consultant virologist at the Leicester Royal Infirmary, told Nature. As well, data from earlier in May from the town of Bolton, a B.1.617.2 hotspot in northwest England, showed that of 18 hospitalizations due to the VOC, only five people had received one dose of vaccine and only one had both doses.

And remember, all COVID-19 vaccines have proved highly effective against severe symptoms, including hospitalizations and deaths.

Vaccine escape sounds ominous, but is shorthand for whether a virus can evade the immune response generated by vaccination. None of the COVID-19 vaccines are perfect, so there will always be some vaccine escape. The question is whether it increases with B.1.617.2.

Very early data shows that the variant is hitting younger, largely unvaccinated populations the hardest, which suggests that the current vaccines are doing OK against the newest variant.

Two doses is better than one, right?

Two doses of a two-dose vaccine is always better than one. And in the case of this new VOC, that full vaccination status could be crucial.

On May 23, Public Health England released pre-print research into how well vaccines stand up to the new VOC found that “effectiveness was notably lower after one dose of vaccine” compared to how well they withstood B.1.1.7.”

In particular, it found that the overall effectiveness of the Pfizer and AstraZeneca vaccines—which are the two main vaccines in Britain—went from 51.1 per cent against B.1.1.7 to 33.5 per cent against the newer Indian variant. (While those numbers are precise, researchers caution that they are generated from confidence interval ranges. So that 33.5 per cent is a range from 20.6 to 44.3, while 51.1 is a range from 47.3 to 54.7, so the difference in the effectiveness of first doses against each of the two VOCS may or may not turn out to be as wide as initially thought.)

And it’s worth remembering that the immunity provided by vaccines can reduce the intensity of the disease if one gets the virus after one dose or two. “One of the thing people have been pointing to is that it [a vaccine] might convert COVID to a cold rather than a hospitalization or death situation,” Saxinger notes.

Why does the AstraZeneca vaccine have a much lower effectiveness versus Pfizer?

Experts aren’t sure, but think it may be a matter of timing.

In Britain, second doses of the Pfizer vaccine are being administered at the 28-day mark, however authorities extended the interval between doses to 12 weeks for AstraZeneca. That’s partly because of its “first dose first” policy, and because of real-world data showing that AstraZeneca is a “slow burn” vaccine that takes time to build its strength. Indeed, the immune response after a first dose keeps growing to around 76 per cent efficacy, then, after a second shot at around 12 weeks, climbs further, reaching an efficacy of 82.4 per cent. In contrast, if doses were given less than six weeks apart, the efficacy was around 54 per cent, according to a pre-print for the Lancet.

And that timing means that, relatively speaking, more people were fully vaccinated earlier with Pfizer and had a longer time to hit maximum immune response compared to those in the study who got AstraZeneca. As well, the study cuts off the reporting of symptoms after dose 2 at the 14 day mark. Experts think that AstraZeneca’s efficacy will continue to grow after that two-week mark. Meaghan Kall, an epidemiologist at Public Health England explained, “The thinking is if the two vaccines had equivalent follow-up time you would see the gap narrow and efficacy become more similar.” And the government press release referenced that timing as a possible explanation for the differences in efficacy.

How does what’s happening in Britain apply to Canada and the rest of the world?

“Earlier in this pandemic, it was like battling an unknown quantity,” Saxinger notes. “Now, it feels like a chess game, where we make a move and it [the virus] makes a move. We just have to make sure we are staying half a step ahead on our surveillance and on our vaccination strategy.”

In particular, we need to scale up our genomic sequencing of this new VOC to identify where it is spreading in the community. “In areas that seem to be showing activity, you might prioritize those hotspots for second vaccinations being faster than in other places,” Saxinger suggests. Otherwise, cases could rise in a fourth wave.

“I think it is a wake-up call. We have to look at vaccine equity worldwide to make sure transmission is getting controlled everywhere,” the infectious diseases doctor says. “The world is a very porous place right now. Border controls don’t matter that much because there are still enough goods and people moving that we can see intercontinental spread of these [variants] quite rapidly, even with precautions in place.”

If there is a cautionary tale, it is Singapore, which has famously tight border controls. Right now, it is in the midst of an outbreak of COVID-19, and genomic sequencing confirmed that those cases are the B.1.617.2 variant.