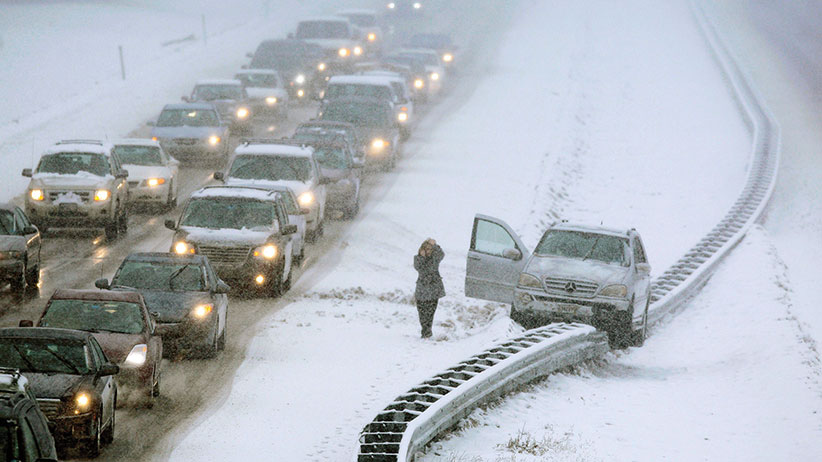 A woman uses a cell phone after climbing out of a vehicle that ended up on a guard rail in the median of Interstate 295 during a snow storm in Cumberland, Maine, Friday, Feb. 25, 2011. (AP Photo/Robert F. Bukaty)

Climate signals are predicting slightly above rainfall and cooler conditions for western Canada and a near-average winter for central Canada. However, farther east, climate signals are more mixed. The average jet stream location will make a big difference for portions of Ontario and Quebec this winter. If the jet stream is farther south, we could see cooler than average temperatures expand eastward from the Pacific to the Atlantic. Currently, though, the jet stream is and has been riding farther north, so warmer conditions will be possible for southeastern Canada. This could also bring more precipitation to the border region from the Pacific east to the Atlantic coast.

Near average or cooler than average temperatures possible for: Quebec (Dec.-Jan.), central and southern portions of Ontario (Dec.-Jan.), the Yukon (Feb.), Manitoba and Labrador

RELATED: How to survive a North Pole storm

Near or below average precipitation possible for: for northern Quebec and eastern Nunavut

*Please note that a pattern and temperature change is anticipated mid-winter, so many provinces will start with above or below average temperatures and finish the winter with the opposite temperatures. Moreover, these forecasts are for a three month period (December to February); some forecasts are only valid for certain months and are marked as such. Intrusions of well-below or well-above precipitation or temperatures could occur anywhere for much shorter periods of time. These intrusions would need to be monitored on a timescale of days or weeks rather than months. For more updates, check back with weather.com/en-CA.