When are COVID vaccines for kids coming to Canada?

Vaxx Populi: No one will give an exact date, but the early results from trials with kids are very promising 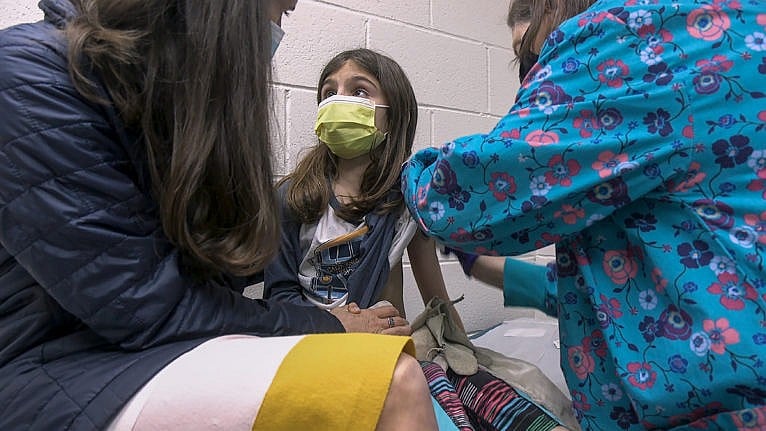 Alejandra Gerardo, 9, looks up to her mom, Dr. Susanna Naggie, as she gets the first of two Pfizer COVID-19 vaccinations during a clinical trial for children at Duke Health in Durham, N.C. (Shawn Rocco/Duke Health via AP)

As Canada administered a record 231,000 doses on April 7, the share of Canada’s population that has received at least one dose of a COVID-19 vaccine rose to 17 per cent. While the federal government expects to receive at least 44 million doses by Canada Day, there is one crucial segment of the population who won’t be getting one of those life-changing shots: children.

As of now, Canada has approved COVID-19 vaccines for adults only:

When are COVID-19 vaccines for kids coming?

No one will give a specific date, as all vaccines need to traverse a rigorous trial and regulatory approval process. But Albert Bourla, Pfizer CEO, raised hopes on March 31 by stating his firm’s plans to submit its adolescent data to health regulators “with the hope of starting to vaccinate this age group before the start of the next school year.” And on April 6, Moderna co-founder Noubar Afeyan said in an interview for Bloomberg that news about his firm’s trials will be coming “in the coming months.”

Any news of a vaccine for children is welcome for parents and children alike. Those under the age of 16 years account for 17 per cent, or 6.5 million, of Canada’s population of 38 million.

RELATED: 15 questions about the AstraZeneca vaccine in wake of new recommendations

“In order to get herd immunity, we need to immunize children,” explained Stephen Spector of the University of California San Diego, who is leading one of Moderna’s youth vaccine trials.

Though their risk of severe COVID-19, including hospitalization and death, is far lower than adults, young people are getting infected at roughly the same percentage as their share of Canada’s population, and are thus exposed to all the dangers of the disease, including long-term effects and a pediatric inflammatory syndrome that was first detected at the start of the pandemic.

Of all Canadians who have contracted COVID-19, those 19 and younger accounted for:

What do the vaccine trials with children show?

On March 31, Pfizer revealed that its COVID-19 vaccine had demonstrated “100 per cent efficacy and robust antibody responses” among adolescents aged 12 to 15 in its Phase 3 trial, meaning that no vaccinated children in the trial got COVID-19. That early news from the trial of 2,260 volunteers in the United States was given in a press release and has not been peer reviewed. On April 9, the firm applied to the U.S. Food and Drug Administration to amend its emergency use authorization, currently for adults 16 and older, to include adolescents as young as 12.

In addition, Pfizer reported that it had started giving doses to younger children in its global Phase 1/2/3 trial, which is broken into three age groups: six months to two years; two to five-year-olds and those aged five to 11 years of age. It offered no guidance on when those trials may be finished.

In mid-March, Moderna announced that the first young participants in its Phase 2/3 trials had received their first doses of vaccine. Its volunteers range from between six months to 11 years. Moderna’s trials include “testing some lower doses because we expect some of those will be as efficacious” as those doses given to adults, Afeyan said, including doses that are 25 per cent or 50 per cent of the adult dose. In addition, he said that “over the coming months, we expect to begin to gather data and share [it] to the public.” The firm had already finished enrolling 3,000 adolescent volunteers aged 12 to 17 in a separate study in February.

As well, regulators and scientists are keeping an eye out for adverse events among immunized adults that may cause concerns about the usage of the vaccines in children. On Tuesday, researchers at Oxford University paused its AstraZeneca vaccine trial involving children between six and 17 as it waited for regulatory safety review triggered by rare cases of blood clots in adults. (There were no safety concerns in the youth clinical trial itself.)