Who pays to protect free speech on campus 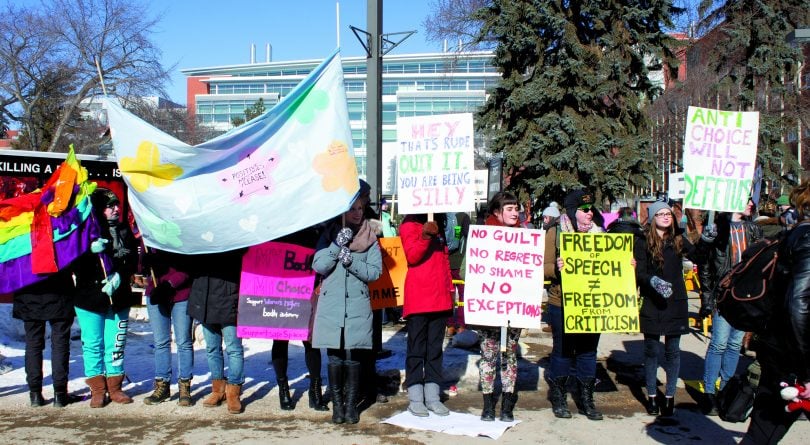 It was early March and there was still snow underfoot as students from the University of Alberta pro-life club set up metal scaffolding for their display. The posters, shipped to the Edmonton campus from a neighbouring anti-abortion organization in Calgary, were designed to outrage with images of bloody fetuses at various stages of development, some of them dismembered. Amberlee Nicol, then president of the club, knew the display had stirred conflict on other Canadian campuses. Still, she was optimistic that it would inspire debate in the high-traffic area known as the Quad. “We wanted to have our conversation with as many people as possible,” recalls the young activist, who has since married and goes by the last name Duteau.

More than getting attention, that two-day display in 2015 precipitated a years-long court battle, leading to a decision in January by the Alberta Court of Appeal that could put the onus on universities to cover the costs of facilitating free speech—even when that speech is designed to stir up the kind of opposition that comes with a hefty security price tag.

READ: Will new rules around free speech on campus wind up silencing protestors?

The ruling sent waves through post-secondary institutions across the country, which are struggling to balance demands to protect free-speech rights while maintaining safe and secure campuses—a task made harder as some activists adopt so-called “direct action” to disrupt or silence messaging that offends.

Suffice to say, the pro-life students weren’t the only ones who had something to say about abortion. In late February 2015, pro-choice students at U of A also started talking and planning. Stephanie Ibsen, a master’s student in environmental science at the time, organized a poster-making session and, as the pro-life group set up its display, she stood in front of a series of wooden barricades, placed by campus security to control crowds. She hoisted a sign reading “pro-choice, pro-woman, pro-child.” As many as 100 other pro-choice demonstrators showed up, their numbers ebbing and flowing as they went to class, or ducked inside to warm frosty fingers. Some protesters held a blanket stretched between two hockey sticks in an attempt to obscure the anti-abortion display. Ibsen recalls the pro-choice group being loud, but respectful. “I didn’t think it was fair that someone has to walk onto campus, just trying to get to class, and be confronted with something like that,” she says. “We tried to create nice signs, we tried to block it out, but we didn’t break any rules.” There were no incidents of violence.

Indeed, the whole situation only came to a head in 2016, when the pro-life club applied to do it all again. The university said yes, but given the previous year’s brouhaha, demanded that the club cover security costs—an estimated $17,500, with a $9,000 deposit up front. It was a price Duteau and company could not and would not pay. “It wasn’t our group causing the disruption,” she says. “We followed all the rules. We were very careful to make sure to set everything up in a safe and respectful way. Unfortunately, people who disagreed with us expressing our views in the centre of campus that way did not respect our freedom of expression.” The club appealed the security-cost decision and another by the university not to discipline any of the pro-choice protesters. The university held firm. Two months later, the club went to court to challenge both decisions.

In 2017, the Alberta Court of Queen’s Bench ruled in favour of the university on both issues. However, the cost portion of that ruling was overturned by the appeal court on Jan. 6. In that decision, Justice Jack Watson wrote: “Whether or not the figures are right, it cannot be said that Pro-Life should be held 100 per cent responsible for costs that future events might generate.” He went on to encourage alternative scenarios where the university could cover security fees, suggesting better fencing, or “a less provocative” display, adding: “Compromises on both sides are in order.”

Universities across the country are watching closely to see whether the precedent holds. U of A had 60 days to seek leave for appeal; at press time, it would say only that it was reviewing the decision. Should the case go to the Supreme Court, the outcome could define how universities deal with the conundrum brought on by the era of so-called “cancel culture.” How do they reconcile demands for free speech when the trend toward “deplatforming” controversial voices—obscuring signs, tearing down posters, blocking speaking venues—causes its own confrontations? How do they deal with groups who generate attention by flirting with hate speech, or by deliberately provoking certain social groups?

For Jay Cameron, a lawyer with the Calgary-based Justice Centre for Constitutional Freedoms, which represented the pro-life club, this partial win is important for what he sees as a culture increasingly hostile to the exchange of ideas, especially unpopular ones. “The way society is set up, if I don’t like what you have to say, I can’t put my hand over your mouth; that’s against the law,” Cameron says. “But what universities are teaching young people is that it’s okay to throw a fit if you don’t like something that somebody said. And that’s a disservice to those young people.”

This article appears in print in the March 2020 issue of Maclean’s magazine with the headline, “A price cut on free speech.” Subscribe to the monthly print magazine here.