Vaxx Populi: Modelling suggests nearly 30 per cent of infections could be avoided by front-loading the distribution of first doses 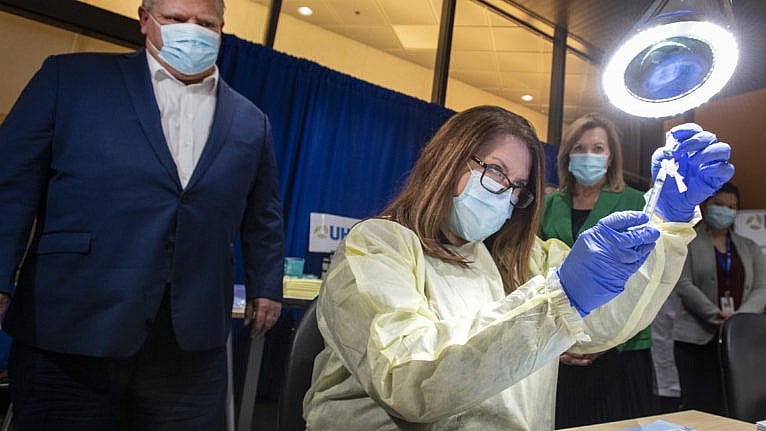 Ontario Premier Ford looks on as a dose of the Pfizer-BioNTech COVID-19 vaccine is prepared at The Michener Institute in Toronto on Monday, Jan. 4, 2021. (Frank Gunn/CP)

On Tuesday, the Ontario government announced that it would vaccinate all residents, workers and essential caregivers in long-term care (LTC) facilities in the hotspots of Toronto, Peel and York Regions as well as Windsor-Essex by Jan. 21.

One reason for the accelerated vaccination plans in Ontario, Quebec, Alberta and elsewhere, is, in part, thanks to a change in procedure that could have a huge impact on the course of the pandemic: they are no longer automatically reserving 50 per cent of doses in freezers for the required second jab, but instead assuming future supplies will be sufficient for those second doses (the Pfizer vaccine requires a second dose three weeks after the first, while the Moderna vaccine requires one four weeks later).

RELATED: My mom turns 80 this summer. Can we plan a party, now that Canada has COVID-19 vaccines?

One reason for the change is research pointing to its benefits, including modelling done by Dr. Ashleigh Tuite, infectious disease epidemiologist at the University of Toronto. In a study she co-authored, published today in the Annals of Internal Medicine, Tuite showed that front-loading the distribution of first doses by allocating the vast majority of the first weeks’ worth of vaccines could mean an additional 23-29 per cent of COVID-19 cases would be averted compared with the previous “reserve” strategy.

“The people who are going to benefit the most are those who are older and in long-term care homes,” Tuite told Maclean’s. “We have this vaccine now, and, if we use it strategically, we can prevent a lot of infections and a lot of deaths in those settings.”

Her mathematical modelling focused on Pfizer’s vaccine, which has an official efficacy of 52.4 per cent after the first dose. The modelling projected what would happen over eight weeks, reserving just 10 per cent of supply for second doses during the first three weeks; 90 per cent during the subsequent three weeks; and 50 per cent in the weeks after that. (Tuite and her co-authors modelled only the first two months of vaccine delivery when supplies are most limited, and it assumes everyone gets two doses.)

RELATED: Who is next in line for the vaccine in Canada?

The study came out of a conversation she had with a co-author, Josh Salomon of Stanford University, about the original reserve strategy. “Based on back-of-the-envelope calculations, it seems like you would never really want to do that,” she says, “if you have a vaccine that provides protection even with the first dose.” So they decided out to examine that “straightforward analytic type of question.”

“It makes sense,” she said of the new, more flexible strategy. “You have a tool that prevents severe infection. It makes sense to front-load this and get as many people protected, even if they aren’t maximally protected, as soon as possible.” The new process “continued to produce greater overall benefits than the fixed strategy even [in a hypothetical scenario in which] we assumed that protection would drop to zero if the second dose was not received within six weeks after the first dose,” the study concluded. Indeed, the only scenario in which the older strategy made more sense was if the effectiveness of the first dose proved to be far lower than previously recorded and the supply of doses collapsed.

Just before Christmas, she presented her projections to the Ontario COVID-19 Science Advisory Table. The table did a separate analysis on adopting such a flexible delivery strategy and came up with very similar findings to those of Tuite, she said. On Dec. 28,Ontario scrapped its second-dose reserve policy.

Since then, the situation in Ontario’s long-term care homes has deteriorated: there are now outbreaks at 216 such homes in Ontario, more than occurred at the worst of the spring wave, which devastated the sector and resulted in the deaths of nearly 2,000 residents. Now, at least, there is hope that many of those living and working in hardest-hit LTC homes will be protected as soon as possible.