The pioneering, 'housing first' experiment inspired other cities and levels of government, providing hope that homelessness is solvable 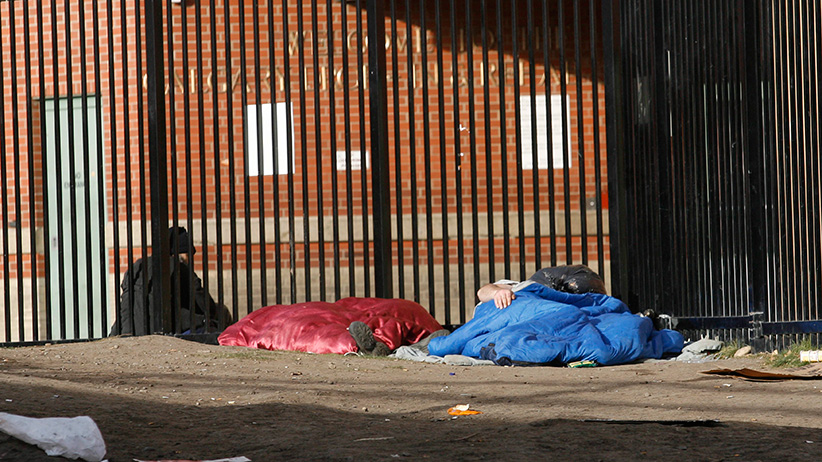 Clients at the Calgary Drop-In shelter pass slowly through security, out of the January chill into a lobby where residents sprawl out for naps despite “no sleeping” signs. It’s a nice place, a man with grey moustache and a backpack explains while riding to the second floor on the six-storey building’s elevator. He’s called it home since 2001, when the Drop-In opened.

By Jan. 29, 2018, Calgary was supposed to have effectively eliminated homelessness—that is, so that hard-luck individuals need shelters like the Drop-in for a few days before agencies find them affordable housing; emergency shelters were to be for brief emergencies. Drop-In managers are pleased to report they now accommodate 900 nightly, after several years filled to capacity at 1,100. But that falls well shy of the Ten-Year Plan to End Homelessness that galvanized Calgary in 2008, complete with a large digital clock that ticked down the days, hours, minutes and seconds to homelessness’s End Day.

This idealistic, some say audacious, goal seemed achievable and necessary a decade ago, when oil prices dashed towards a record US$147 a barrel, and business and civic leaders expressed alarm at how abundant and visible street people were amid Calgary’s dizzying prosperity. Looking back at the mission he helped launch, and still raises funds for, retired oil executive Jim Gray now he wonders if achieving zero is actually possible. Did he ask that question 10 years ago? Not aloud. “I was trying to inspire people,” Gray says.

Advocates who say ending homelessness is possible point out that the problem never existed on its current scale in North America before the 1980s. Calgary’s plan could have worked, but “we didn’t have everyone in the boat pulling on all the oars at all the same time,” says Kevin McNichol, vice-president of strategy for Calgary Homeless Foundation (CHF), which anchored the mission. Business types persuaded the Alberta government to shovel millions into affordable rental units, but it wasn’t nearly enough, and Ottawa’s long-awaited national housing strategy didn’t materialize until last fall. Meanwhile, some not-for-profit agencies wary of the private sector’s fix-it ideas were initially slow to cooperate, while Calgary’s hot-and-cold economy yanked rents up and down, along with the city’s poverty and unemployment levels.

Nor did anyone have clear data to understand Calgary’s homeless population, let alone how to reduce it. Today, biometric fingerprint scanners help track Drop-In clients into the shelter and around the galaxy of social and public services. Citywide, the homeless population in Calgary is down about 11 per cent from its 2008 peak. Agencies found homes for 8,700 people and aims for 10,000 by year’s end.

Still, had CHF not excited politicians and donors with the moon-shot of ending homelessness, the current orbit may have been impossible. “We’ve shown that homelessness is not just this fact of life that we have to accept—that it is a solvable problem that we could do something about,” says Tim Richter, who left energy company lobbying to lead CHF, and is now president of the Canadian Alliance to End Homelessness.

Calgary’s aim inspired other Canadian cities and provinces to launch their own 10-year plans. In Edmonton, which is using the same “Housing First” model as Calgary, homelessness has dropped 43 per cent. Hamilton, Ont., focused on supportive homes for the chronically homeless—those in shelters for six months or longer—and reduced that challenging subset by one-third. Medicine Hat, Alta., became in 2015 the first North American city to claim reaching functional zero, even if the small city’s shelter still hosts a dozen or more people nightly.

This highlights that “ending homelessness” is defined differently in different cities: in Medicine Hat, zero meant ensuring nobody waited 10 days before agencies identified them as homeless and found the right program to provide them housing. At least four men remain long-time shelter residents who feel most at home there, and don’t want apartments. “They’re thriving, but I need to make sure they have their own key” to future homes, says Jaime Rogers, the city’s manager of homeless and housing development. (Calgary counts about 600 chronic homeless, staying in shelters an average of five years, while several times that number need emergency refuge for a few weeks in between homes.)

Many local leaders are hopeful about the federal housing strategy, with its goal to cut chronic homelessness in Canada in half within a decade—plus all the funding it promises, alongside talk of a basic income program.

Calgary itself borrowed its ambition. The 10-year plan trend had swept major U.S. cities years before 2008, though the enthusiasm generally waned as political leaders changed, or the gravity of the challenge became clear, says Nan Roman of the Washington-based National Alliance to End Homelessness. The Obama administration’s interagency council devised more modest benchmarks, like ending homelessness for families or veterans—and multiple cities have proclaimed an end of veterans’ homelessness even though hundreds are still in shelters. “It’s kind of great, in a way, that we’re fighting over what [ending] really means,” Roman says.

Hamilton’s 10-year plan never set ending homelessness as a target, though after early successes an updated plan will set some sort of timetable for End Day, says Amanda DiFalco, the city’s homeless programs manager. Calgary, meanwhile, will maintain the dream without a deadline.

That CHF digital clock ticking from 3,650 days to zero never got there. In December, the foundation moved offices and nobody knows what happened to it. It had become “exhausting” to look at, McNichol says: staff knew they had a long way to go, and a  one-decade-later date in January 2018 has far less meaning than the task they’re actually working toward.