Why is Ottawa trying to move Atlantic Canada's artifacts to Quebec? 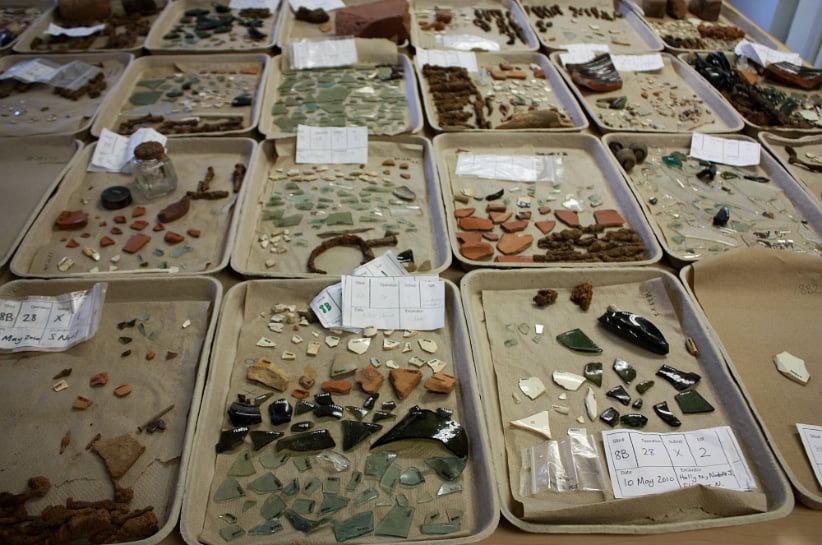 Update, Aug. 10, 2017: Darren Fisher, the MP for Dartmouth—Cole Harbour, has announced on Twitter that the Dartmouth archeology lab will remain open.

As Canada celebrates 150 years of Confederation, academics and community leaders in Atlantic Canada are campaigning to keep more than a million tokens of their heritage—from a silver cross dating to pre-expulsion Grand Pré to a trove of Mi’kmaq artifacts—from being relocated. “For us, this raises red flags and reminds of us of another forced removal,’ said Véronique Mallet, executive director of Société Nationale de l’Acadie and a vocal critic of a federal plan to move archeological relics from their home in Dartmouth, N.S. “We were removed from our lands, and now we’re moving Acadian history and artifacts and taking them away from the hands of the Acadian people.”

While many of the other facilities are older, the purpose-built Dartmouth lab opened in 2009 to replace two others: one in Halifax’s North End and the other in Dartmouth, near Burnside. Considered state-of-the-art, the new 22,154-square foot facility is spacious and climate-controlled, accommodating a variety of labs, offices and even its own library.

To close it, says Mallet, would sever a vital link between scholars in the Atlantic provinces and the communities they’re studying. “Our biggest concern is that these artifacts are moving further away from the Acadian people and our centre of research,” she said. “We have a scientific community here that is researching Acadians and we’d be separating those people from the artifacts that are here.”

Jonathan Fowler, an archeologist at Saint Mary’s University who has done work at Grand Pré and other sites, counts among those affected. “It’s like if you need a book, you can pivot in your chair and it’s right there, but what if now that book is in Gatineau?” he said of the move. “You have to get on the phone, and try to get someone to go through the collection to find it.”

In an emailed response, Parks Canada spokeswoman Audrey Champagne said the closure decision was made because many of the buildings—excluding Dartmouth’s—have environmental and security issues. This means that 60 per cent of the artifacts held by the parks agency are at risk of being damaged or destroyed.

“To ensure the long-term sustainable care and management of the collection, the decision was made in 2012 that a single, new, Parks Canada owned, purpose-built facility was the most viable and cost-effective solution,” said Champagne, adding that the decision was further supported by a 2015 Investment Analysis report from Public Services and Procurement Canada.

The possibility of the Dartmouth facility being exempted from the amalgamation does not appear to be entirely closed off: Champagne noted that Parks Canada has leased the property until 2029, adding that the agency is “currently working on considerations regarding the Dartmouth facility and will share its decision shortly.”

But Fowler is skeptical. He’d begun to hope after the change of federal government in 2015 that the decision would be reversed, but neither he nor the Nova Scotia Archaeology Society has seen any sign that Parks has changed course; he believes that the closing is “still full-steam ahead.”

That’s why he and others are spreading awareness and gathering support. Critics of the plan include Bill MacDonald, mayor of Annapolis Royal, home to historic sites like Fort Anne and Port Royal, who described the idea as “singularly offensive.” To allow “the physical evidence of our early origins to leave and be relocated in another province,” he said, “simply for what is perceived by bureaucrats as a cost saving measure, is unacceptable.”

Like Mallet’s, MacDonald’s argument centres on the connection to the past a physical object can represent to people in a given area, be it a Mi’kmaq smoking pipe or a Viking cloak pin from L’Anse aux Meadows, Nfld.: “The artifacts here in Nova Scotia—from Fort Anne, Port Royal, from the Melanson Settlement—all of these items are physical evidence that there was a habitation in 1605 and that it was continual and permanent and it was society that carried on.”

Champagne maintained in her statement that some artifacts from the closed labs will remain on display at museums and historic sites and that any moved items will remain as accessible as possible. “Coupled with Parks Canada’s active loans program, the same level of access to the collection will be maintained, if not enhanced,” she said.

Still, Fowler and others remain anxious, hoping that a resolution is reached that allows Atlantic Canada’s history to stay in Atlantic Canada. He likens the artifacts to albums or heirlooms passed through the generations of a family, adding: “That’s what these objects are; they are the story of our region.”